On the night of March 14, Cyclone Idai struck the coast of Southeast Africa, causing catastrophic flooding and leaving hundreds of thousands cut off from health care and other essential services. Across Malawi, Zimbabwe, and Mozambique, rivers broke their banks, homes collapsed, and high winds and waters resulted in the deaths of hundreds of people and the displacement of thousands more.

The storm affected as many as 1.7 million people in Mozambique—where the storm hit hardest—920,000 in Malawi, and 15,000 in Zimbabwe, according to figures from the World Food Program. Wind and flooding rendered roads and bridges impassible, knocked out power to vast swathes of all three countries, and destroyed or disabled crucial health and sanitation infrastructure. 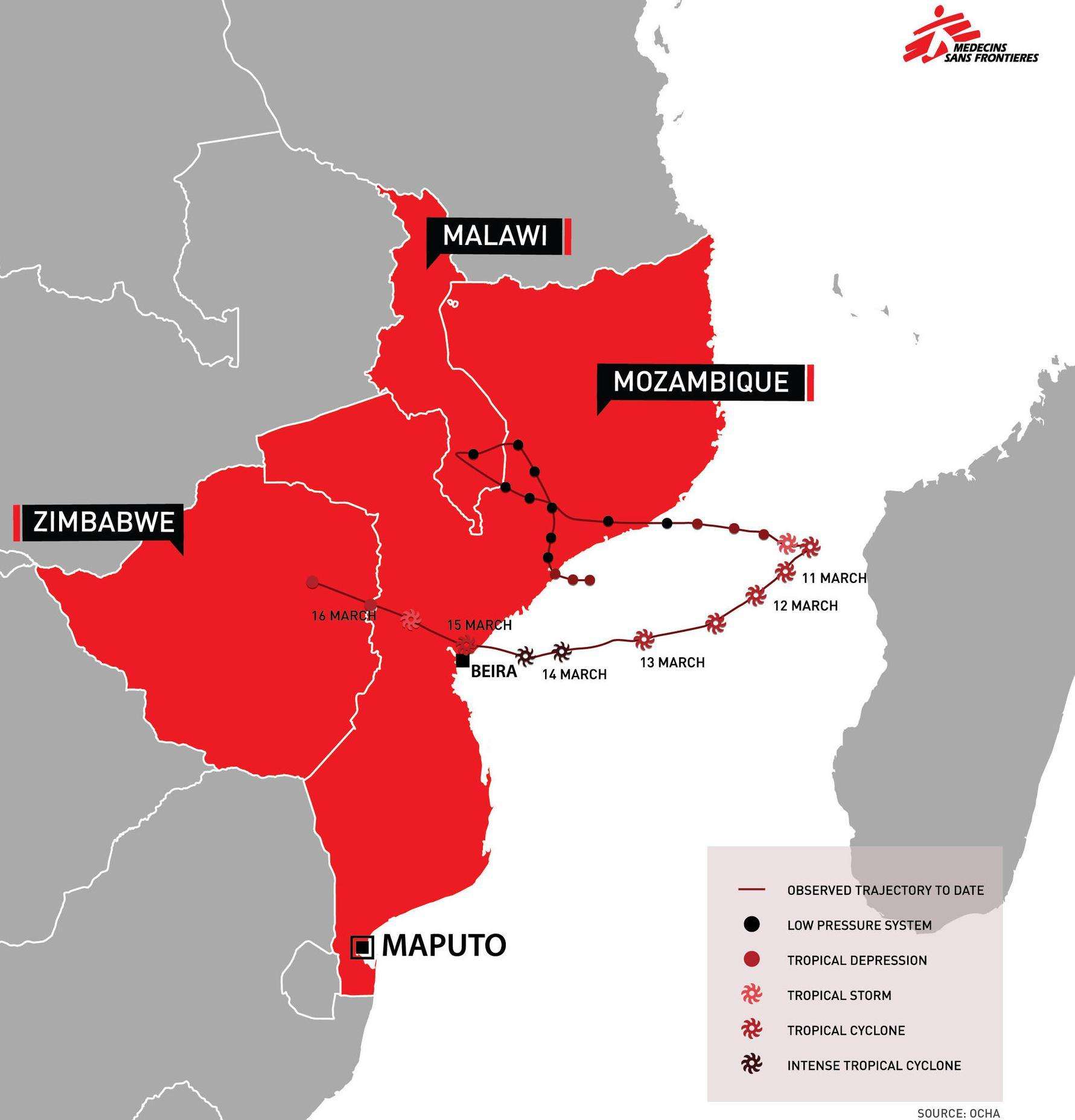 MSF immediately launched an emergency response to address the massive needs in all three countries, working with Ministries of Health to rehabilitate damaged facilities, running mobile clinics to reach people cut off from aid, shipping more than 100 tons of medical and logistical supplies, and responding to outbreaks of cholera.

Six weeks later, we have begun to scale down our emergency response as the overall situation slowly stabilizes. Thankfully, the cholera outbreak has been curbed and over 803,000 people are now vaccinated against the waterborne disease thanks to a large-scale campaign led by the Ministry of Health (MoH). However, access to safe water remains a concern. MSF teams are working within communities to install water points, repair the damaged water network, and disinfect and repair wells. We continue to monitor cases of malaria and food availability.

According to the government of Mozambique, 602 people have been confirmed dead, as of April 8, 2019.

As of April 8, UNOCHA estimates that 1.85 million people are in need of urgent assistance:

MSF-supported teams have so far treated more than four thousand patients suspected of having cholera in the flood-affected areas of Mozambique. An oral cholera vaccination campaign has reached 803,125 people, or 98.6 percent of the target. There are currently almost 900 MSF staff members working in the flood-affected disaster area:

MSF has sent more than 100 tons of international air freight supply to Beira, with more to come.

The heavy flooding caused by the cyclone, coupled with the interruption or outright destruction of water and sanitation services, created an ideal environment for the spread of water-borne diseases like cholera in Mozambique.

The government-led and international cholera response was fast and comprehensive. Mozambican authorities prioritized the rehabilitation of Beira city’s water treatment unit, which is now once again providing clean water to much—but not all—of the city.

A large-scale cholera vaccination campaign, led by the MoH and World Health Organization and supported by MSF with vehicles and logistical, technical, and planning support, has vaccinated over 803,000 people. This went a long way towards curbing the outbreak and protecting the most vulnerable. A few people continue to fall ill with cholera or suspected cholera daily, and MSF and MoH teams continue prevention efforts. That said, in light of the reduction of cases, MSF has reduced beds at our cholera treatment centers (CTC) and we expect to close or hand over management of these facilities to the MoH by the end of April.

Cyclone Idai was the first time a major natural disaster hit a country with one of the highest HIV prevalence rates in the world (16 percent of Beira’s population is HIV-positive.) MSF’s HIV projects were initially disrupted by the storm when health centers were damaged or destroyed and when MSF staff were pulled into the cholera response.

These projects have now returned to full capacity, providing care for patients with advanced HIV, as well as to those with a statistically high risk of HIV, including sex workers and men who have sex with men in Beira. While the teams are still mapping the changes and challenges brought by the storm, it’s clear that many patients did not have access to medication for some time.

MSF currently operates a 50-bed CTC in the Macurungo neighborhood of Beira. We are still running an ambulance and referral system to ensure that patients with suspected cholera are taken to the closest treatment center. Teams continue to provide waste water management and desludging of latrines to further safeguard against any the threat of waterborne disease. To ensure the supply of clean water, we are working with the local water authority to repair the water network and cleaning, disinfecting, and repairing the wells that were damaged in the cyclone.

MSF has distributed chlorine and soap to more than 5,000 households, with another 5,000 planned in the coming week. Mental health support is also available to the community and MSF’s Mozambican staff who experienced the trauma of the cyclone.

In remote villages around Beira, MSF has distributed water and installed or improved sanitation capacity. Mobile clinics continue to operate in hard-to-reach areas.

MSF began rehabilitating the local health center in Buzi on March 28 with a focus on the maternity ward. We support local midwives in this hospital and provide antenatal care in the community. There is also a four-bed (down from 12) CTC for suspected cholera cases. MSF provides clean water for this CTC, the hospital, and the community. Mobile clinics are operating in the remote communities of Grudja, Guara Guara, Bandua, and Inharongue.

MSF continues to treat cholera patients in a 16-bed CTU and run ambulance referrals. In the worst-affected areas, we are also providing oral rehydration solution and water and sanitation (WASH) hygiene. We support the health system with malaria treatment and surveillance, infection prevention control, and erection of tents in badly damaged health structures. In the rural areas of Chibuabuabua, Tundane, Savare, and Samora Mahel, we have distributed 6,800 non-food item (NFI) kits.

Cyclone Idai hit Chimanimani, a small district of approximately 30,000 people in Manicaland Province, late on March 15 after passing through Mozambique. According to the Civil Protection Unit, 169 died in Chimanimani and 11,255 people were displaced.

Starting on March 16, MSF doctors and nurses, together with other health service providers, began delivering medical assistance and provided essential items and basic water and sanitation interventions. On March 21, MSF set up services in Chimanimani Rural Hospital, where, in addition to medical screening and treatment, teams provided medicines for chronic conditions. MSF also managed to access other health centers in Chimanamani by foot, bicycle or motorbike, covering distances between 12 to 30 kilometers (7 to 18 miles.) 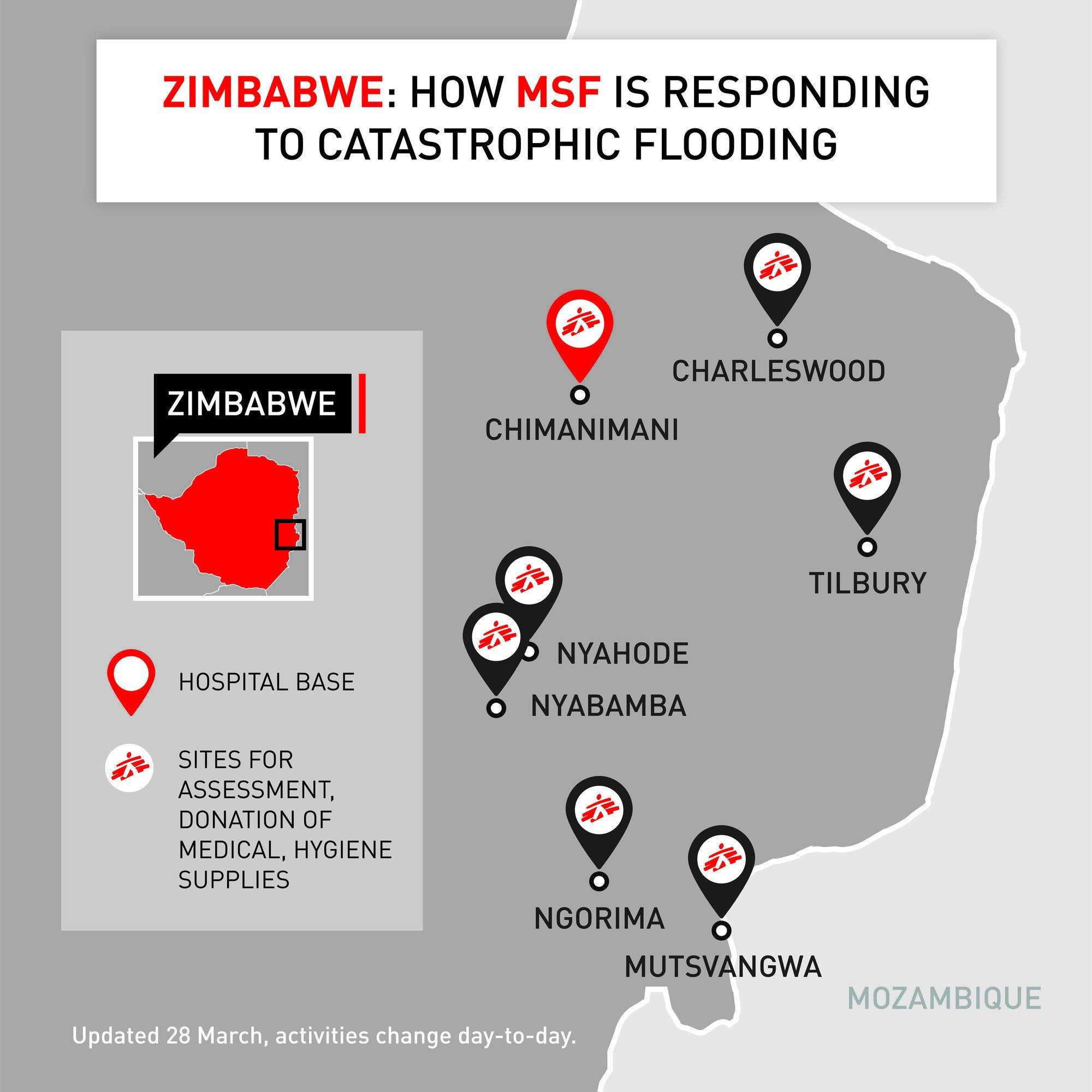 Working with the MoH, MSF reinforced a cholera vaccination campaign that vaccinated 128,251 people. As of April 30, MSF will end our emergency response in Chimanimani.

In Chipinge, an hour and a half southwest of Chimanimani, MSF provided aqua-tabs for water purification, essential medicines, and non-chronic disease (NCD) medications for diabetes, hypertension, and asthma. Teams are also assisting with psychosocial support and helped the MoH vaccinate 334,761 people against cholera.

Nearly one million people have been affected by Cyclone Idai in Malawi and 83,000 people are displaced overall. Extremely heavy rains in lower Shire River districts of Chikwawa and Nsanje, compounded by further rains from Cyclone Idai, caused severe flooding. Rivers broke their banks, affecting some 11,000 people in Nsanje alone, according to the national disaster report. Official figures confirm 56 deaths, 577 injured, and three missing.

In early April, MSF focused its support on the Makhanga area in Nsanje’s East Bank, one of the worst affected areas only reachable by boat. An 18-person MSF team helped the MoH with health and sanitation services and distributed non-food items to an estimated 18,000 people. At the Makhanga Health Center, we delivered essential medicines and human resource support to ensure the continuation of primary health care, HIV consultations, and epidemiology assistance. 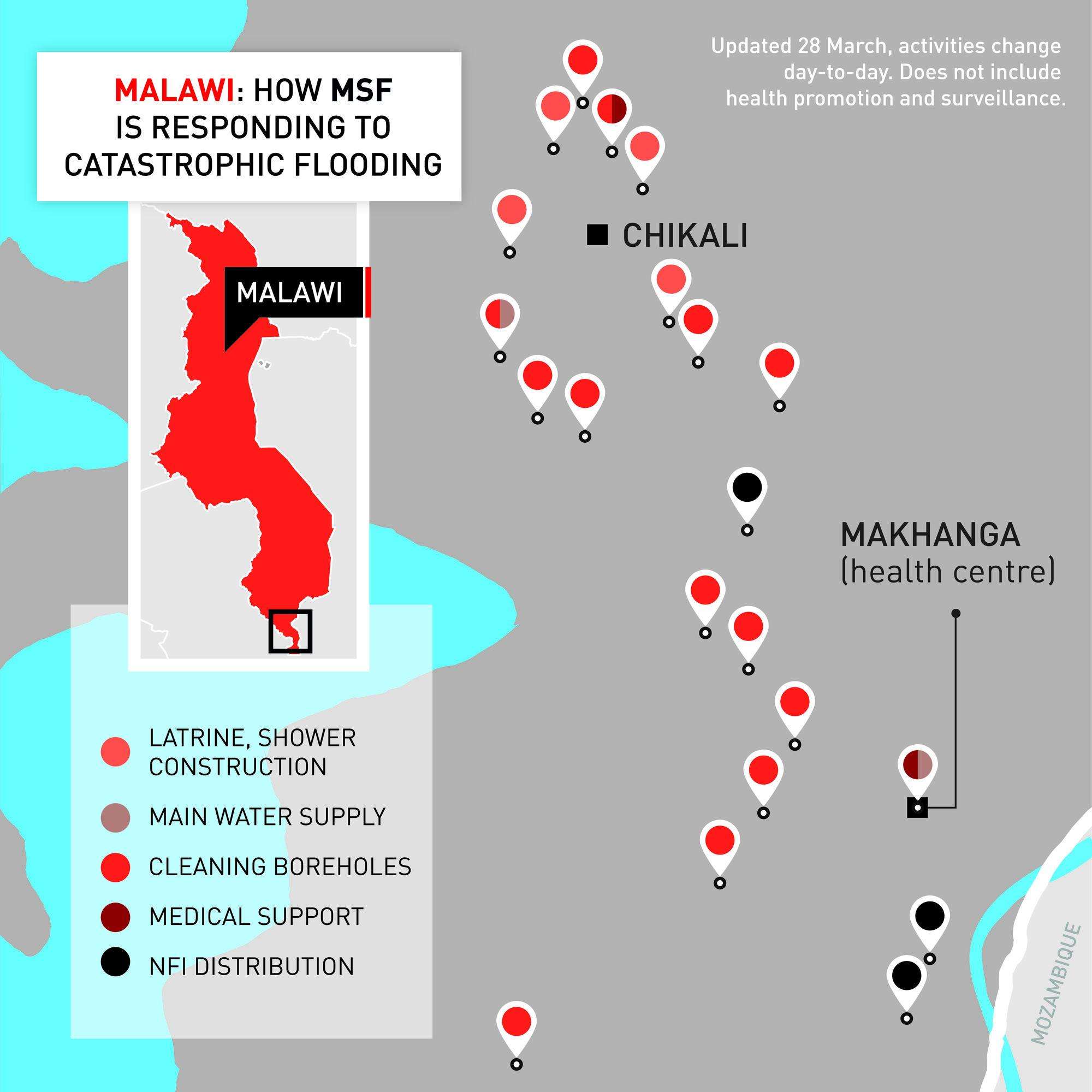 On April 11, MSF finished its emergency response activities in the Makhanga area. 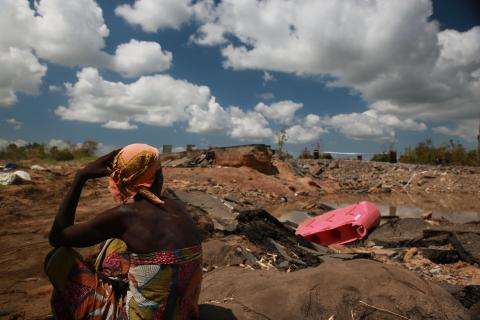 Cyclone Idai, Mozambique: "Beneath the waters, you will find us" 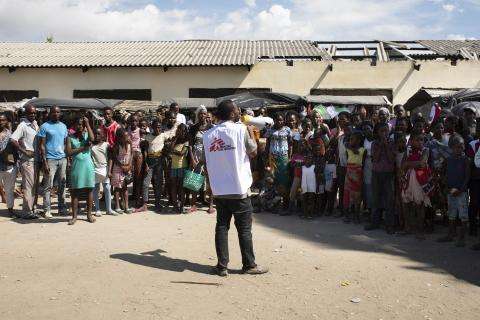 After the cyclone, preparing for future threats in Mozambique