Bolivia and Paraguay: "We are wasting the opportunity to put people who need it on Chagas treatment"

Recently, Chagas projects have seen their treatment capacities limited due to a shortage in benznidazole, a first-line drug manufactured by only one laboratory in Brazil. 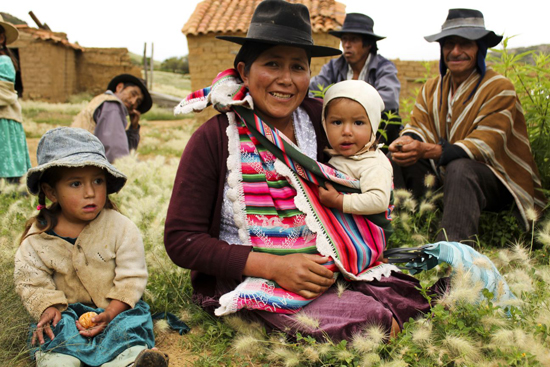 After both her parents and her parents-in-law tested positive for Chagas disease, this mother was happy to learn that neither of her daughters had been infected.

In Bolivia and Paraguay, Doctors Without Borders/Medecins Sans Frontieres (MSF) runs free programs against endemic Chagas disease. Recently, Chagas projects have seen their treatment capacities limited due to a shortage in benznidazole, a first-line drug manufactured by only one laboratory in Brazil. Henry Rodriguez, general coordinator for MSF in Bolivia and Paraguay, describes the situation.

What impact has the benznidazole delay had on MSF’s projects?

No new treatment can be started until we have more drugs because we can’t risk interruptions in treatment. If treatment is stopped for longer than a week, you have to start all over again. We have also had to screen less because we don’t want to diagnose if we can’t treat – if we can’t ensure continuity of treatment, we will also lose patients. Our stock ran out at the start of the year, and since then we’ve been using drugs lent to us by the Ministry of Health. We are wasting the opportunity to put people who need it on Chagas treatment.

Are there no other treatment options?

Nifurtimox is an option, but only as a second-line drug, according to national protocols, so it is used only when benznidazole has been ruled out. Nifurtimox has more adverse effects on the nervous system and there are fewer studies that guarantee its use for Chagas.

What is the current situation with benznidazole in Bolivia and Paraguay?

Benznidazole is not registered in these two countries, which is slowing down distribution. Exporting it from Brazil and importing it into Bolivia and Paraguay is a slow and complicated process. In Bolivia, for instance, as of May we only had enough drugs to treat patients until mid-June, and as of the end of June the order had only just left customs with a month’s delay. In Paraguay, we’ve had to wait almost nine months to receive the pills we need because the drug wasn’t registered.

How many people are waiting for treatment from MSF?

In Paraguay, for example, almost 200 people have been diagnosed as positive and only 36 have started treatment. The rest are on the waiting list because of the lack of drugs. Even when the drug is available, some won’t want to start because they’re afraid of the side effects. This despite our 12 years of experience showing that these are mild and controllable with a weekly medical check-up. Around 30 percent will develop chronic complications from the disease. There is neither evidence nor any indicators to determine if an infected person will develop a symptomatic illness. Chagas is a silent disease and it can take up to 20 years for an infected individual to show symptoms, by which time it is in the chronic stage. This means that people don’t want to deal with side effects because they feel well at the moment. Hence, it is very difficult to convince them; it isn’t a priority for them. In addition, they don’t really believe the treatment is effective because there is no proof that it cures.

So once a person has been treated, it is impossible to know if the treatment has been effective?

That’s right. There is no test of cure, so when the treatment has finished they don’t know whether it has worked or not. It can’t be proven, so they live with the uncertainty. This is one of the difficulties when trying to persuade people of the advantages of treatment. For people younger than 15, the probability of recovery is more than 90 percent, and for children under five it is almost 100 percent, so it’s easier to convince these patients and their parents. What we really need to fight for is a test of cure. Studies are currently being carried out to prove the long-term benefits.

Why is it so difficult to produce this drug?

Benznidazole used to be made by Roche, but they decided to transfer their technology to the Brazilian laboratory LAFEPE because they didn’t want to make it any more. LAFEPE had to find another laboratory that made the active principle, because nobody else in the world makes it. So we are completely dependent on one sole laboratory that makes the active principle and one sole laboratory that makes the drug. What’s more, to get a drug onto the market, you have to comply with a raft of legal measures that ensure its quality, security and effectiveness, all of which takes a long time.

Another factor that worries us is the price of the end product, because we know the cost of the active principle has gone up. The raw material currently available is not enough to make the millions of pills that are needed for the rest of the year. Orders also aren’t handled well enough, which means that some countries have more than they need and others don’t have any.

How are a country’s needs calculated?

Drugs are made according to demand, but it is difficult to calculate demand for various reasons. There are no reliable studies on the prevalence of Chagas, and national programs need to know how many people who are diagnosed as positive want to be treated, and whether health centers and hospitals will have the capacity to treat them. There is a calculation tool for countries to make accurate orders, but these factors make it more difficult, and if they aren’t right, we don’t get the drugs we need.

In addition to diagnosis and treatment, does MSF carry out prevention?

MSF also carries out prevention work. Vector control is vital so that patients aren’t re-infected once they’ve started treatment. For the last year, we’ve been showing patients how to carry out their own vector control at home. This empowers them and increases awareness in the community.

There are few available human resources through the national program. This year, for instance, all vector control technicians had to be devoted to the dengue emergency in Bolivia and Paraguay, which left nothing for Chagas.

Bolivia, where MSF has been working since 2002, is the country most affected by Chagas. The disease is endemic in 60 percent of the country. Most people here live in poverty in isolated, rural areas , which makes access to treatment in urban health centers difficult both geographically and economically.

Furthermore, local willingness to be diagnosed and treated is very limited and fairly uncommon in patients over the age of 15. MSF is currently treating children and adults while actively promoting treatment and seeking better access throughout the country.

MSF started work in Paraguay in 2010, with a free Chagas program in conjunction with the Ministry of Health in the department of Boquerón, Chaco. Some three percent of the population, largely indigenous peoples, lives in the Paraguayan part of this semi-desert, sprawling region. Access to healthcare is insufficient and geographically difficult. Before MSF began treating Chagas in November, the Ministry of Health was only treating children under the age of five in the wealthier eastern part of the country.