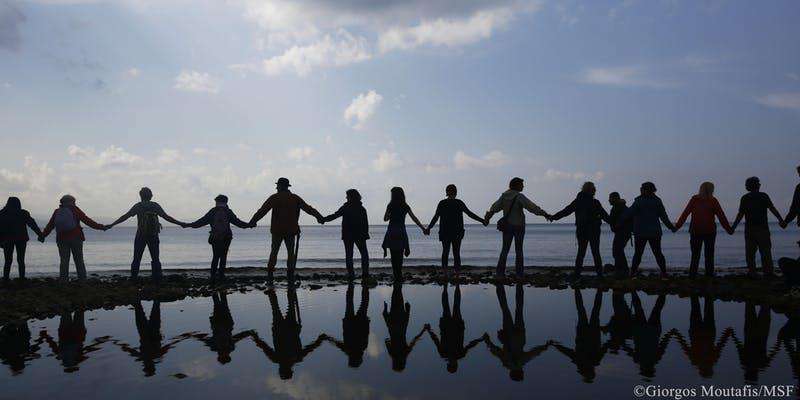 Seeking Safety Is Not a Crime - Chicago, IL

Doctors Without Borders/Médecins Sans Frontières (MSF) presents a moderated panel discussion on the disturbing global trend toward treating refugees and asylum seekers like criminals. Panelists will address the impact of increasingly restrictive migration control measures in the US and abroad, including the detention and deportation of people seeking safety. The discussion will focus on the medical and mental health consequences of forced displacement for the record 68.5 million people worldwide who have been uprooted.

This event is part of our programming around “Forced From Home,” a free interactive exhibition about the global refugee crisis that will be in Chicago from September 23-30. Find out more at forcedfromhome.com.

Join us at 6:30 PM for light refreshments at our pre-event reception.

Alex V. Hernandez, engagement editor at 90 Days, 90 Voices. His reporting has appeared in the Chicago Tribune, Chicago Reader, Chicago Magazine, In These Times magazine and City Bureau. He is also the Lincoln Square, North Center and Irving Park reporter for Block Club Chicago.

Dr. Jacqueline Stevens, professor of political science and legal studies at Northwestern University, and founding director of the Deportation Research Clinic at the Buffett Institute. Stevens is a recipient of a Guggenheim Fellowship and numerous other awards for her scholarship on political theories of membership. Her clinic's findings have been reported by the New York Times, the New Yorker, and NPR. The Clinic works with a global network of lawyers, journalists, and those in removal proceedings to uncover government misconduct. Documents the Clinic has obtained through the Freedom of Information Act have been used to sue the government and private prisons. Stevens' 110-page law review article analyzing the illegality of work by U.S. residents held under immigration laws led to seven class action lawsuits against private prisons in recent years. She is a political science professor at Northwestern University and lives in Chicago and New York City.

Mary Meg McCarthy, executive director of Heartland Alliance’s National Immigrant Justice Center (NIJC). Under Mary Meg’s leadership, NIJC has become a leading immigrant and human rights advocacy organization, contributing to reform of immigration law, policy, and practices and providing a strong national and international voice on related issues. She has built a network of 1,500 pro bono attorneys who are essential to providing legal services to thousands of individuals each year. An expert in immigration law, Mary Meg is a frequent contributor in national and international arenas. She has testified before Congress and has presented at the United Nations and the Strategic Litigation for Change Conference in Belfast. Mary Meg is quoted often in major news outlets such as CNN, MSNBC, The New York Times, and the Chicago Tribune. Prior to joining NIJC, she practiced civil litigation and was an NIJC pro bono attorney. Mary Meg has been honored with several awards including: American Constitution Society Chicago Lawyer Chapter Ruth Goldman Award (July 2015), Archdiocese of Chicago 2017 Special Honor Award, Chicago Inn of Court 2015 Don Hubert Public Service Award, Damen Award from Loyola University (June 2015), Justice John Paul Stevens 2015 Award, and the Pax Christi 2013 Teacher of Peace Award. In June 2018, she received an honorary degree in law from Knox College (Galesburg, IL).

Dr. Rebecca Singer, DNP, RN, teaches population health at the University of Illinois College of Nursing drawing on over a decade of experience in global health and community partnerships. She has worked for over 75 months in the field with MSF, providing care to survivors of violence, establishing primary health services for displaced persons and refugees, responding to epidemics and establishing emergency preparedness. She has also worked with Grounds for Health establishing community based cervical cancer prevention programming in Latin America and East Africa. Formerly the Director of Healthcare Services at an interdisciplinary center for torture survivors in Denver, Colorado, she provided intensive healthcare case management to asylum seekers and refugees. Additionally, Dr. Singer is involved in a UIC project to bring nursing students into correctional facilities to engage in health promotion activities with the individuals detained there. She is also part of a team developing an on-line curriculum that will prepare health care workers to provide care within the corrections system.

Stephanie Puccetti is the humanitarian affairs advisor for MSF in New York, where she conducts research, policy analysis, and supports external representation of MSF's global operations with the United Nations and US government. She has more than ten years of international experience establishing and managing large-scale humanitarian programs in Nigeria, Syria, Iraq, South Sudan, the Philippines, Haiti, Democratic Republic of Congo, Zambia, and Kenya. Much of her past work has focused on sexual and gender-based violence in emergency settings and the protection of civilians in armed conflict. Stephanie holds an MSc in reproductive and sexual health research from the London School of Hygiene and Tropical Medicine; a certificate in law, war, and human rights from the London School of Economics; and a BA in anthropology and African studies from the University of Illinois at Urbana-Champaign. Read her recent Q&A on the challenges facing Central American migrants and asylum seekers.

NOTE: Seating is available on a first-come, first-served basis. Please check in at least five minutes before the start of the panel in order to guarantee your reservation.

Seeking Safety Is Not a Crime - Chicago, IL