How we're helping in Yemen

The war in Yemen is fueling a massive humanitarian crisis

After more than four years of war in Yemen, the health system is in ruins. The conflict continued to escalate, with shifting frontlines and attacks against civilians across the country. Learn more about the history of the Yemen crisis below.

What is happening in Yemen?

The war in Yemen has created one of the world's worst humanitarian crises. Millions of people depend on humanitarian assistance for survival, including more than three and a half million people who have been displaced by the fighting. Doctors Without Borders/Médecins Sans Frontières (MSF) medical projects in Yemen are among our biggest worldwide. Over 119,000 people with injuries related to war and violence have been treated in MSF and MSF-supported facilities between March 2015 and December 2018. Learn how you can best help in Yemen and other countries.

As an organization providing medical aid to people in Yemen, MSF worked in 13 hospitals and health centers and provided support to more than 20 health facilities across 12 governorates in 2018. However, repeated attacks on medical staff and structures during the year forced us to suspend activities in several areas.

Insecurity and access constraints also prevented us—and other organizations—from collecting reliable data on the nutritional and humanitarian needs across the country. Our teams treated 5,700 children for malnutrition across Hajjah, Sa’ada, Amran, Ibb, and Taiz governorates, but saw no signs of impending famine—contrary to what the UN and others were suggesting.

On June 13, 2018, an offensive was launched by the Saudi and Emirati-led coalition (SELC)-backed forces loyal to President Hadi to seize Hodeidah from Ansar Allah troops. In response to the intense fighting along this frontline over the following three months, we opened a surgical hospital in Mocha in August and performed almost 1,300 major surgical interventions by the end of the year. As well as patients with war wounds, we received pregnant women with complications requiring urgent surgery. Referrals are made to our trauma center in Aden, where MSF teams conducted more than 6,000 emergency consultations and performed more than 5,400 surgeries, 90 percent of them violence-related, in 2018. Please donate to support our work in Yemen and other countries around the world now.

Following failed peace talks, a new offensive on Hodeidah began in mid-September. Daily clashes partially blocked the main Hodeidah–Sana’a road and raised fears of a siege around the city. In September, we started providing emergency medical and surgical care to people affected by Yemen’s humanitarian crisis at Al Salakhana hospital, northeast of the city, after rehabilitating the emergency room and operating theatres. By early November, as fighting intensified further still, Al Salakhana was one of only three operational public hospitals in the area.

At the same time, we began rehabilitating and providing donations and technical support to other hospitals in the governorate, at Al Udayn, Far Al Udayn, and Ad Dahi, as fighting displaced huge numbers of people and cut off their access to health care.

In mid-December, the warring parties agreed to a ceasefire. The Stockholm Agreement included a prisoner swap, the creation of a demilitarized zone around Hodeidah and the withdrawal of Ansar Allah troops. A committee was also set up to discuss the future of the city of Taiz, which, after four years, is still divided by frontlines and a grim example of the urgent need for more medical aid. When you donate to support our work to help in Yemen and other countries, you're helping provide lifesaving medical care to the people who need it most.

History of the Yemen humanitarian crisis: attacks on civilians, medical staff, and facilities

According to the independent monitoring group Yemen Data Project, 17,729 civilians have been injured or killed in SELC air raids between 2015 and 2018 inclusive, with Sa’ada the worst-affected governorate in 2018: it was targeted by 1,306 air raids—39 percent of all recorded air raids and more than in any other year since 2015. Our teams continued to work in Haydan hospital in Sa’ada, to help those in Yemen, which has now been fully rebuilt after being destroyed by an SELC airstrike in 2015.

On 11 June, an MSF cholera treatment center was bombed in Abs, Hajja governorate—less than two years after Abs hospital was bombed, resulting in 19 deaths and 24 injuries. This was the sixth time an MSF facility has been hit by the warring parties since 2015.

In addition, we were forced to close our projects in Ad Dhale governorate after our staff house was targeted with explosives twice in less than a week in November. Our teams had been working in Ad Dhale since 2012, supporting the health facilities in Ad Dhale, Qataba, Al Azariq, and Damt districts to treat more than 400,000 patients. In late December, we also ended our support for Razeh hospital, in Sa’ada governorate, due to its proximity to the frontline and the high level of risk to patients and staff.

Critical gaps in care are fueling a medical crisis in Yemen

The Yemeni health system is in ruins across the whole country, but most evidently in the northern governorates, where SELC airstrikes intensified at the end of 2017 and into 2018.

Many medical staff have left because their salaries have not been paid since August 2016, and few hospitals are still functional. Yemenis struggle to access and afford basic commodities such as fuel, food, and medicine because of a deteriorating economy, and the commercial closure of Sana’a airport has prevented people from seeking treatment abroad.

In response to the vast gap in services for women and children in particular, MSF teams provided maternal and pediatric health care in Ad Dhale, Amran, Hajjah, Ibb, and Taiz governorates in 2018.

On the western coast, one of the biggest medical issues in 2018 remained the lack of surgical capacity.

In the 280-mile stretch between Hodeidah and Aden, a six to eight-hour drive, the MSF hospital in Mocha is the only facility with an operating theatre serving the local population. Between August and December 2018, our teams in Mocha treated more than 150 people who were wounded by landmines, improvised explosive devices, and unexploded ordnance. A third of them were children who had been playing in fields. In September, a Conflict Armament Research report pointed to Ansar Allah’s large-scale mass production of mines and improvised explosive devices, as well as its use of anti-personnel, vehicle, and naval mines. Help support our lifesaving work in Yemen and more than 70 other countries.

We treated much fewer cholera cases than in 2017, but with conditions ripe for new waves of the disease, the threat remained. We opened a new cholera treatment center to deal with an increase in confirmed and suspected cases in Ibb in late 2018.

In 2018, MSF teams continued to see cases of diphtheria across Yemen, and treated 570 patients in Abs, Ad Dhale, Ibb, and Taiz. Measles is also a concern, especially in Sa’ada, Hajjah, and Amran governorates. In 2018, MSF teams treated 1,981 cases. Immunization remains a huge challenge: mass vaccination campaigns were delayed on numerous occasions and hampered by access constraints, especially in remote regions, and by lack of authorization in some areas.

A timeline of Yemen's humanitarian crisis

Join the MSF movement to help in Yemen and other countries 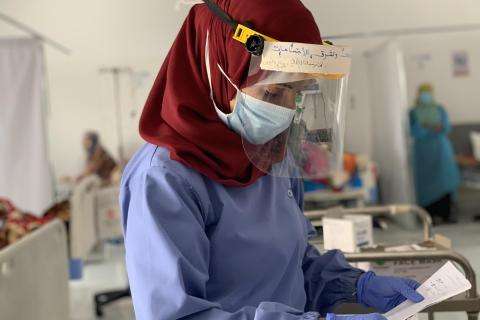 Yemen: As COVID-19 spreads, fear drives people away from hospitals 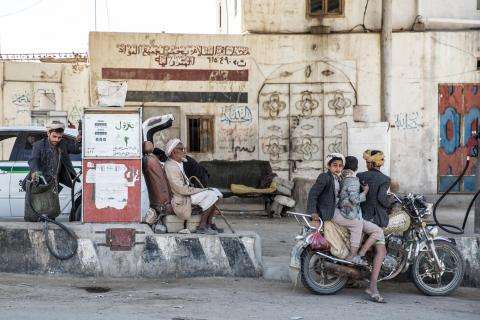 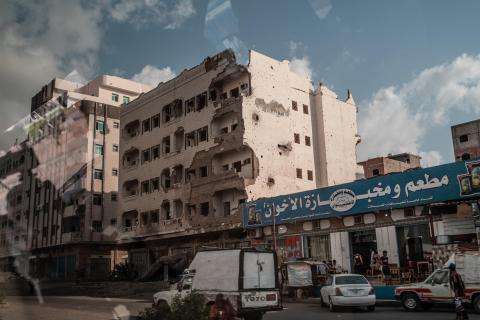