View Photo COLOMBIA 2010 © Mads Nissen
Chagas screening at indigenous community "La Esperanza"(Hope), Arauca region. Chagas disease is diagnosed through a blood serum test. A centrifuge is used to separate the blood soon after the sample is taken and obtain the serum, which is then taken to a laboratory for analysis.<br /><br />At the end 2009, MSF integrated Chagas screening and treatment into its primary healthcare services already carried out in Arauca, a conflict-affected region in Colombia bordering Venezuela. After patients are confirmed to have Chagas disease, they are given a medical check up and started on a two-month long treatment. The MSF team carries out weekly medical follow up to check for side effects and any difficulties with complying with the treatment. This is the first time MSF treats Chagas diseas in a conflict context. "It is a real challenge, because the treatment requires constant follow up during two months, and there is always the concern that we will be unable to reach a community for security constraint or because an armed group declared a general stopping of the road movements in the region", said Patrick Swartenbroekx, MSF field coordinator in Tame. Chagas disease is endemic in most Latin American countries. It is caused by the trypanosoma cruzi parasite and transmitted mainly by the 'kissing bug', a blood-sucking insect common in rural areas and city outskirts where people live in adobe houses made of clay and straw. Transmission is also possible from mother to child, through blood transfusions, organ transplants and contaminated food. Patients with Chagas disease may live for years without presenting any symptoms. If untreated, however, the disease can lead to serious health problems, mainly heart and intestinal complications, and even death.
COLOMBIA 2010 © Mads Nissen
Click to hide Text

Chagas is a parasitic disease found almost exclusively on the American continent, though with increases in global travel cases have begun to be reported in the U.S. and Europe.

Millions of people with the disease, including those infected decades ago, go undetected and untreated. Without treatment, Chagas can eventually progress to fatally damaging the heart, and the nervous and digestive systems.

Doctors Without Borders/Médecins Sans Frontières (MSF) has treated patients with Chagas disease since 1999 and has worked in Bolivia, Guatemala, Honduras, Mexico, Brazil, and Nicaragua. However, existing drugs and diagnostic tests are inadequate, expensive, and in short supply.

Without significant funding, MSF Chagas programs in Latin America have an uncertain future.

Chagas, or Trypanosoma cruzi, is a parasitic disease transmitted by an insect that lives in the walls and roofs of mud and straw housing, common in rural areas and urban slums in Latin America.

The bugs that carry the disease, known as ‘triatomines’, emerge at night to feed. Chagas has also been known to be transmitted through blood transfusions, organ transplants, breastfeeding, and congenitally through a pregnant mother to her baby.

Contracting the disease through eating or drinking infected food or water is highly unusual but it has been recorded.

Chagas disease has two stages: an acute stage, shortly after infection, and a chronic stage, developing over many years. Detecting Chagas in both stages is particularly difficult.

In the acute stage—the first few weeks after infection—only mild symptoms appear and they are common symptoms of many other diseases. These can range from body aches and fatigue to fever and vomiting.

After the acute phase, Chagas goes into remission and no other symptoms may appear for many years.

About 20 to 30 percent of those infected will go on to develop the chronic form of the disease where life-threatening heart and/or digestive disorders will develop, causing irreversible damage to the heart, esophagus, and colon. Symptoms at this stage might include constipation, digestive problems, abdominal pain, and swallowing difficulties.

Diagnosing the disease is complicated. Doctors need to perform two or three blood tests to determine whether the patient is infected with the parasite and often these tests are inadequate, expensive, and in short supply.

MSF has called for the development of new diagnostic tests.

There are few drugs that can effectively treat the disease and the current line of treatment can be toxic, taking one to two months to complete. Just like diagnostic tests for Chagas, treatments for the disease are also inadequate and expensive.

In Bolivia and Guatemala, MSF’s most effective Chagas programs have focused on preventative measures, education, and screening in children.

The following excerpt is adapted from the 2014 MSF Activity Report

As many as one million people are estimated to be infected with Chagas disease in Bolivia. Chagas is endemic across 60 percent of Bolivia and is commonly transmitted by the vinchuca bug (Triatoma infestans), which lives in the cracks and roofs of rural adobe houses. Only four percent of those people infected get treatment, owing to a lack of access to care.

The government recognizes this as a major health issue and has been working to address it; however, Chagas treatment is not guaranteed or integrated into basic health care. MSF has set up Chagas treatment programs over the years it has been working in  Bolivia, particularly in Narciso Campero province in Cochabamba department, where the disease is especially prevalent. The health ministry has managed that program since 2013.

In 2014, MSF teams focused on another priority area: Chuquisaca department, Monteagudo municipality, in Hernando Siles province. Hardly any of the 61,900 residents of this region have access to treatment. In partnership with the health ministry, MSF is working on a model of prevention and treatment to be integrated into the basic healthcare system.

MSF also collaborated with the health ministry in partnership with Johns Hopkins University this year to prepare the launch of EMOCHA, an e-mobile surveillance application. Upon detection of a vinchuca infestation, a community volunteer will send a free SMS to a central information system, and a vector control team will be deployed. 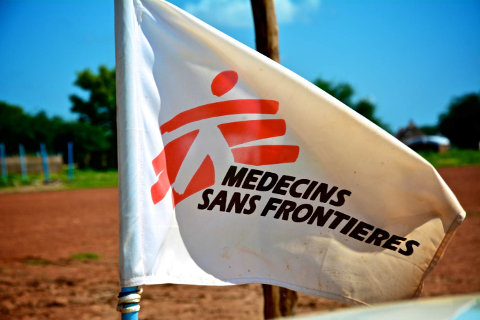 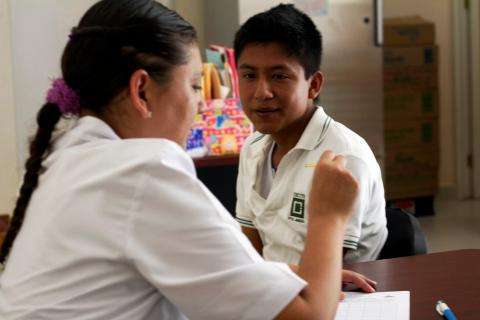 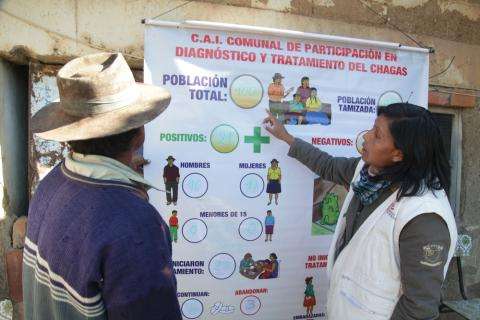