Medical practice does not and cannot have double standards. So as health professionals we’re constantly looking to provide the most effective health care possible for our patients. this is no easy task, and even if we’re continually making progress, there’s still a lot to do. 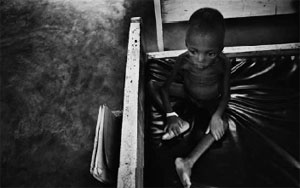 In 2006, MSF provided treatment for almost two million people with malaria. This disease is all too common in poor, tropical areas and remains responsible for large-scale loss of life, particularly among young children. In March 2007, we were pleased to see the launch of a new medicine combining two of the most effective molecules for treating this disease in one tablet. Named ASAQ, because it combines Artesunate and Amodiaquine, this new formulation is the work of the DNDi (Drugs for Neglected Diseases Initiative), of which MSF is one of the co-founders*. The DNDi should allow us access to another medicine in the next few months, this time combining Artesunate and Mefloquine – a combination required for the numerous regions where the most serious form of the malarial parasite has been highly resistant for some years.

At present we are treating 100,000 HIV/AIDS patients with daily antiretroviral therapy (ART) in over 30 countries. This is obviously insufficient given the rising needs generated by the pandemic. AIDS is a disease that currently necessitates lifelong treatment. The virus’ resistance to drugs after some years is a major concern for each of our patients and presents limitations to us as medical practitioners attempting to treat them. We have already observed this complication in South Africa, where 17 percent of our patients require a second line of medicines after only five years of ART. We need new medicines, and affordable ones, whether second-line drug regimens or access to a first-line that will remain effective over a longer period of time. This explains our mobilization every time we have the impression that access to new medicines at affordable prices is under threat – such as when the laboratory Novartis launched a lawsuit against the Indian government this year to try to strengthen patent rules that would effectively reduce generic production capacity. We buy 80 percent of our anti-retroviral drugs from Indian generic producers and would not be able to find an equally affordable source in the immediate future. 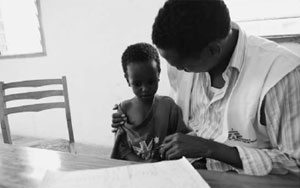 In our daily practice of medicine in the field, the domain of maternal-infantile health remains a cause for concern and requires considerable innovative efforts. Therapeutic nutrition is a good example. In last year’s report, we mentioned the increased number of nutrition cases treated in an emergency utilizing ready-to-use therapeutic food based on a nutrient-dense peanut-milk paste. With this we initiated an outpatient strategy, treating the vast majority of children affected by severe malnutrition in an area of Niger. We now know that the number of children we were able to treat increased about ten-fold and the cure rate was better than previous protocols requiring systematic hospitalization and using therapeutic milk or enriched flour. We now apply this strategy everywhere, from West Africa, where severe infant malnutrition is recurrent in countries such as Niger, through to the displaced or refugee populations in Darfur and Chad. A lot still has to be done to extend the use of these new therapeutic foods; to reduce the price of the raw materials they are made with, especially milk; and to get new compositions specifically for pregnant women and those with chronic illnesses. The availability of such a product is bringing a potential revolution for nutrition in resource-poor settings.

Overcoming this hurdle in the domain of nutrition should not, however, mask accumulated delays in the domain of preventive medicine, and two examples particularly stand out. First, vaccinations that could prevent deadly diseases such as meningitis are still too costly, or developed from pathogenic strains that bear no relation to those most commonly found in the poorest countries. Second, there is prevention of mother-to-child transmission of HIV. This issue is different in that the therapeutic protocol is known, involving medicines to be taken by mother and baby, but difficult to implement because of a lack of follow-up for pregnant women in countries with a limited health infrastructure. This presents a challenge for us, Doctors Without Borders, and we must take it on, because so far this prevention has been introduced in less than 15 percent of our missions involving more than 500 deliveries a year.

In addition to pediatrics and gynecology-obstetrics, we are trying to explore and make fuller use of technical advances in other medical specialties, such as surgery. Over the past few years, we have progressed from practicing a rather basic, so-called war and emergency surgery, to more programmed acts targeting reconstruction – a specialty of particular interest in the case of large-scale orthopedic or facial damage, or obstetric fistulas. This theme is developed further in the pages that follow in this report. The domain of infectious diseases is also important and takes up a large share of our practice, particularly in tropical areas. Here again, we need to revise our therapeutic tools. The antibiotic therapies currently in use should be reviewed to ensure ongoing and maximum effectiveness. This will require facilitating access to drug-sensitivity testing, whether for allowing the revision of protocols or for having a more specific impact on emerging and particularly drug-resistant strains of disease, such as tuberculosis (TB). We currently treat only one patient out of three for resistant forms of TB. This subject is also developed in the following pages as it amounts to a real emergency, including for our patients co-infected with HIV in Africa.

Whatever progress we bring to our medicine, it comes to nothing if we don’t manage to access people who need it. We constantly have to adapt ourselves to the contexts in which we work, particularly armed conflicts. We are currently absent from, or our presence is too sparse in certain major contemporary crises, including Iraq, Afghanistan and Chechnya. The difficulty in accessing victims of conflict is nothing new for us, but the so-called "war on terror" and launching of military/humanitarian integrated interventions, even by the UN, is hampering the independence of humanitarian action. We don’t consider this observation to be definitive, but we need to take it into account for the security of our teams and its impact on our ability to assist victims. Assisting populations caught in crossfire remains the core of our mandate, and there will be no way for us but to continue doing our best to reach them. Christopher Stokes offers an analysis of the situation in the following pages.

Darfur is incontestably one of the crises in which we have limited possibilities of deployment. This is despite the 2,000 people working in our different programs there. We’ve had to evacuate certain of our missions over the past year, and many of the roads where we underwent targeted attacks have become impassable, especially since the number of parties to the conflict has increased following the partial signature of a peace agreement in May 2006. It’s true we still cover the health needs of approximately half a million displaced persons throughout the region and that in the camps there has been no major outbreak because of an unprecedented deployment of aid. But, and Bruno Jochum reviews this situation in the following pages, most of these IDPs remain fully dependent on this external support and are subjected to a continuous threat of violence, both outside and even inside the camps. Moreover, we have only a limited access to the dispersed populations or those who stayed in their villages. This is one of our main concerns.

Our interventions will continue to focus on countries emerging from war and in emergency situations, despite the fact it is not easy to keep our maximum reactivity in these contexts. We have bigger but limited capacities. The association of our emergency specialty and our willingness to reach first and foremost the populations caught in crisis, leads us to hand over our activities when other actors are able to come in. Our actions and interventions are by essence temporary, and we have thus withdrawn from several countries this year. This does not mean these countries no longer need aid, but that we consider that the time has come for our responsibilities towards defined populations to shift into other hands, whether private aid organizations or public services. When the organization has had a massive presence in a country for many years, as was the case in Angola, these departures require a great deal of planning, and represent another area where we intend to make improvements.

In 2006, MSF undertook over 9 million medical consultations, and hospitalized almost half a million patients. For this work and commitment to remain constant, the massive support we receive from individual donors worldwide remains crucial. It allows us to preserve our humanitarian identity and to maintain our independence to make decisions about where and how we will work, guided by the needs of our patients and independent from any power other than the medical-humanitarian imperative. It allows us to carry on our actions de secours in more than 60 countries. We are at work, wholly committed but always conscious of our own limitations - and always trying to push them back.