On 26 December 2004 shortly after a tsunami ravaged the coasts of South Asia, leaving more than 300,000 people dead and thousands more injured and homeless, more than 200 MSF international volunteers and hundreds of national staff rushed to the hardest-hit areas, especially Indonesia and Sri Lanka. Within 72 hours, our first teams began working in conjunction with national efforts to provide emergency relief to thousands of people affected by the disaster.

MSF's response included providing medical staff and materials to existing health facilities, running mobile clinics where no health care was available, setting up emergency water and sanitation systems where displaced people were gathering, distributing essential relief items, and once initial medical needs had been met, giving psychosocial assistance to those traumatized by the event and its consequences. 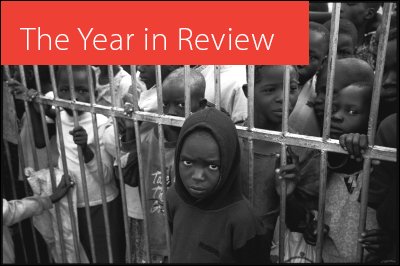 In sharp contrast to virtually every other catastrophe that humanitarian organizations addressed in the past year, the tsunami generated an exceptional outpouring of goodwill, solidarity and generosity on an international level. Less than a week after the tsunami, MSF estimated that it had received more than sufficient funds for its foreseen emergency medical activities in the region and asked donors to contribute to our work in other emergencies instead. On page 52 of this report, we explain why MSF took this – at the time – radical stance and how it reinforces our ideas about financial transparency and our own particular role in this type of crisis.

In addition, MSF approached its donors worldwide to request their permission to use their donations in other crisis situations such as Niger, Uganda, Somalia, Colombia or the Democratic Republic of the Congo (DRC), where huge numbers of people continue to suffer year after year in deafening silence. Our supporters were overwhelmingly positive and their donations are now being used in places like southwest Niger, where, by the end of 2005, MSF teams expect to treat as many as 50,000 severely malnourished children and where an adequate international response to the nutritional and medical crisis has failed to materialize.

It is the ongoing support of thousands of individuals that makes it possible for MSF to assess needs and provide medical relief within hours of a disaster or a crisis. MSF can start working without having to wait for the international community to wake up to the crisis or for institutional donors to release funds. Thanks to its supporters, MSF can retain its independence and intervene when and where our assistance is most needed. This impartiality and independence of analysis and action are crucial elements of MSF's identity that must be upheld despite the changing landscape of humanitarian aid. As described in an essay included in this report, MSF's identity and principles are what enables the organization to work in complicated contexts in which the effects of man-made crises are devastating for individuals.

One conflict in which MSF's neutrality has been crucial is in the DRC, where, for the majority of the people, the so-called transition from war to peace remained little more than a mirage in 2004 and 2005. Thousands continued to die from treatable diseases such as malaria and measles. Violence continued to f lare, trapping those living in the provinces of Ituri, North and South Kivu and Katanga.

In June 2005, the abduction of two MSF staff members by armed militiamen forced MSF to withdraw its teams from the outskirts of the town of Bunia, leaving thousands without medical care. Yet MSF continued its work in the city hospital, where surgeons operated on adults and children who had survived gunshot wounds, machete attacks, burning or sexual violence. Elsewhere in the DRC, MSF teams provided hospital and basic care to local populations and people displaced by violence.

In Colombia, people have been forced for decades to live amid violent confrontations among government forces, paramilitary groups and armed guerrillas, which have terrorized and targeted civilians in both rural and urban areas. In its projects around the country, MSF tries to alleviate some of the suffering by bringing medical services, including psychological care, to vulnerable and displaced civilians. Similarly, in the Haitian capital of Port au Prince, civilians have also been caught in the crossfire of political and criminal violence that has wracked their city in waves since September 2004. While living conditions in several of the poorest neighborhoods deteriorate and brutal attacks intensify, the number of people who have been injured by violent acts – and who have received emergency medical and surgical care from MSF – continues to grow. In July 2005, MSF spoke out about the worsening security situation and publicly called on all armed groups to respect the safety of civilians and to allow the wounded to obtain emergency medical care.

Today, approximately two years after violence broke out in Sudan's western region of Darfur, the conf lict has faded from the media. But the terror it inf licts on civilians remains ever-present. Many of those gathered in camps within Sudan or just across the border in eastern Chad see no end in sight to their plight, and repeated village burnings, sexual violence and attacks have made returning home an unrealistic option for most. Yet the camps or villages in which they have gathered are far from secure. People living in these areas continue to be subjected to repeated aggression and recurring displacement. During 2005, MSF continued to assist more than one million people forced to f lee their homes or otherwise affected by the violence and its consequences.

In addition to the medical care provided, MSF spoke out on a number of occasions, including before the UN Security Council, on what our teams have witnessed in Darfur. After having provided medical care to hundreds of women and girls who had survived rapes or other sexual violence in Darfur, MSF spoke out on violence against women in a March 2005 report. The report's stark findings led the Sudanese government to arrest two MSF international volunteers who directed MSF's work in Darfur. International outcry finally led to the men's eventual release. MSF staff members see it as a responsibility to make people and governments aware of the abuses they witness. To remain silent is impossible. How MSF can best assist victims of sexual violence remains a pressing issue and is highlighted in an essay within these pages.

Meanwhile, the inhabitants of wide areas of southern Sudan have started to suffer from malnutrition due to food scarcity. MSF teams working there are treating a growing number of children suffering from severe malnutrition as the precarious nutritional situation has been aggravated by the return of displaced people and refugees now that the peace agreement is in place.

Improving care for those with neglected diseases

Every day, in countries around the world, MSF confronts another form of violence that touches millions. Patients living with diseases such as malaria, tuberculosis (TB), HIV/AIDS, sleeping sickness and Chagas disease, to name only a few, die simply because the medicines needed to treat them are not available in sufficient quantities, are too expensive or do not even exist. An essay on malaria included here suggests that, because these diseases mainly affect poor people living in developing nations, there is little urgency to increase the supply of crucial medicines, find new treatments or develop better diagnostic tools. In recent years, there has been a timid resurgence of research on these diseases, however, considering the decades of neglect, these improvements are precarious and disproportionately minor for patients awaiting diagnosis and treatment today.

While MSF and many others have shown that it is possible to treat HIV-positive adults – even those living in very resource-poor settings – the same has not been true for the disease's youngest victims. Today our efforts to treat children infected with HIV/AIDS are severely hampered by a lack of appropriate drug formulations and diagnostic tools. Despite the fact that MSF is now successfully treating more than 45,000 patients in 29 countries, our field teams are forced to devise makeshift solutions, such as breaking adult pills in two or struggling to get young children to swallow syrups frequently, to treat them.

For HIV/AIDS patients who are also infected with TB (the most common opportunistic infection accompanying HIV/AIDS), the obstacles are just as big. Problems in diagnosing TB, high pill loads, drug interactions, and the lack of coordinated care are some of the difficulties facing our medical teams in various countries, especially in parts of southern Africa, where both diseases kill thousands every year. However, as a feature story in this report shows, it is possible to successfully integrate HIV/AIDS and TB care. In countries such as South Africa, some important headway has enabled extremely ill patients to regain their health and restart their lives.

Whether caring for an HIV/AIDS patient co-infected with TB, a gunshot victim in DRC or Haiti, or a malnourished child in Niger, MSF continues to strive to bring medical assistance to those who most need it. Yet our ability to gain access to people in need is challenged by the abuse of humanitarian symbols for political purposes, and the concurrent violence against humanitarian aid workers themselves. The responsibility of states in respecting the role of impartial humanitarian action is something explored in another essay included in this report. This essay discusses the need for action based on principles. MSF has been accused at times of being "old fashioned" and even extremist for reaffirming its basic principles in an evolving world. However, it is the use of these very principles to interpret and respond to a changing environment that allows us to carry out pragmatic actions under such conditions. We hope this report provides insight into the work MSF does, merging principles and pragmatism in many different contexts and different ways. However, we always have one goal in mind: to provide medical assistance to those who need it, whatever the circumstances.