In October, a cholera epidemic took on overwhelming proportions. In less than three months, MSF treated more than 91,000 patients for the disease, around 60 per cent of all registered cases (see pages 84 – 85). The operating budget for MSF in Haiti in 2010 came to almost 106.1 million euros. One year after the earthquake, however, significant needs were still not being met. As Stefano Zannini, Head of Mission for MSF in Haiti, said: “Our staff worked tirelessly over this last year, and in spite of that I feel uneasy and sort of uncomfortable about what is still a disaster situation for most of the population”.

The aftermath of the earthquake in Haiti has exposed serious deficiencies in the wider aid system, deficiencies that have also been revealed in Afghanistan and Pakistan, raising the question of whether the international aid system in its current set-up is really meeting the needs of the people it claims to help. 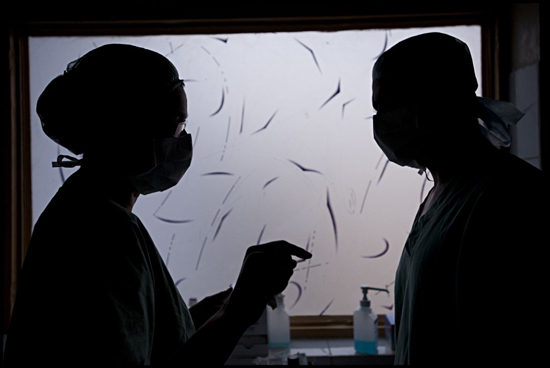 A year of natural disasters

The Haitian earthquake was not the only major natural disaster MSF responded toin 2010. In Pakistan, MSF staff carried out more than 80,000 medical consultations,treated more than 4,500 children for malnutrition and distributed 1.8 million litres of clean water every day to people affected by flooding in the provinces of Khyber Pakhtunkhwa, Balochistan, Punjab andSindh. Parts of Chad, Nigeria and Somalia also experienced the worst flooding in more than a decade. MSF distributed blankets, tarpaulins, plastic sheeting and mosquito nets, and set up clean water supplies to help the hundreds of thousands of displaced people. In central Chile, a powerful earthquake killed several hundred people and displaced more than a million others. Nearly every region of Guatemala was affected when a violent tropical storm hit just hours after a volcanic eruption. MSF assisted victims of both of these emergencies from project bases in Central and South America.

Elsewhere, millions of civilians living in conflict zones continued to suffer the effects of armed violence. In 2009, MSF returned to Afghanistan to respond to mounting humanitarian needs as conflict spread to almost every region of the country. MSF has worked hard to find the space to provide independent and impartial assistance in an environment where, as MSF’s Afghanistan country representative Michiel Hofman said, “seeking help amounts to choosing sides in the war”. In 2010, MSF staff worked in hospitals in the Afghan cities of Kabul and Lashkargah, and we are continuing negotiations with all warring parties in order to extend our operations further. In Pakistan, teams have been helping to improve the emergency response capacity of hospitals in conflict zones. On several occasions during the year, violent incidents resulted in massive numbers of casualties arriving at the District Headquarters hospital in Timurgara, near the border with Afghanistan. Its independence, impartiality and needs based approach have enabled MSF to reach and assist people living in conflict areas in Afghanistan, the Central African Republic,Kyrgyzstan, Pakistan and Somalia in 2010. Despite insecurity, MSF is generally able to assure the continuity of medical care. But incidents in parts of Sudan and the Democratic Republic of the Congo (DRC) have put MSF staff at unacceptable risk and restricted our ability to provide healthcare. Activities in Gumuruk in south Sudan had to be suspended after therapeutic food was stolen from the clinic and MSF staff were violently robbed while travelling to another health centre. In DRC, soldiers from the Congolese army entered a hospital in the South Kivu region and abducted four patients. The complete absence of respect for medical structures and access to medical care forced MSF to evacuate its surgical team from the hospital.

MSF was obliged to suspend activities in Turkmenistan in 2010 for very different reasons. Having worked in the country since 1999, MSF decided it could no longer provide effective assistance in a country where national health authorities hide the true state of public health and disseminate misinformation, and where the system prevents health workers from providing adequate care. MSF drew attention to the problems facing people in need of medical care in Turkmenistan in the report Turkmenistan’s Opaque Health System.

Other countries where MSF works simply do not have the resources to provide adequate care. Measles is endemic in many developing countries, but in 2010 a number of countries that had seen a decline in
cases were subjected to serious outbreaks of the disease: Malawi suffered its biggest epidemic in 13 years. MSF led a campaign that vaccinated 3.3 million children, and our staff provided care for 23,000
patients. Teams also provided assistance in responding to massive outbreaks of measles in Chad, DRC, Nigeria, South Africa, Swaziland, Yemen and Zimbabwe, continued The Year in Review supporting the immunisation of more than 500,000 children and treating thousands of patients. Measles is not the only disease recurring. Faced with a “new” disease, people may be afraid or unaware of how to respond, and local medical staff may lack experience in treatment. Cholera had not been seen in Haiti for more than a century before the epidemic in 2010. Papua New Guinea also experienced its first cholera outbreak in 50 years; MSF treated thousands of patients and trained more than 1,000 health workers and volunteers in clinical management and infection control.

A global polio eradication campaign, begun in 1988, had met with significant success, and the disease remained endemic in only Afghanistan, India, Nigeria and Pakistan. However, in 2010 serious outbreaks have occurred in DRC, the Republic of the Congo and Tajikistan. MSF teams assisted with treatment and vaccination campaigns in DRC and the Republic of the Congo. We faced new emergencies too. MSF treated almost 400 children for lead poisoning, after seven villages in northwestern Nigeria were found to be contaminated with lead from small-scale gold mining activities.

2010 saw the roll-out of a new vaccine that could prevent the worst meningitis epidemics in Africa. MSF took part in vaccination campaigns in Niger and Mali and is actively advocating for widespread use of the vaccine (see pages 18 – 20). And after campaigning for improved food aid for several years, we are at last seeing international donors start to review and adjust their food aid policies. (To see the effect of the improved policies, see the report on Niger, pages 44 – 45.) 2010 also saw the establishment of the Medicines Patent Pool, which will allow generic manufacturers to produce patented medicines in exchange for royalty payments. For the mechanism to work, however, we need drug companies to step up and make their patents available. Unfortunately, efforts to improve access to HIV/AIDS treatment are facing a setback. International donors are shifting their focus away from HIV/AIDS and funding is stagnating, while new evidence demonstrates that providing better treatment earlier prevents severe illness and helps reduce transmission. MSF is urging governments to create reliable funding mechanisms to ensure that the progress made over the last decade is not put at risk, and that more patients can be treated more effectively.

In recent years, more and more migrants have embarked on a long journey to escape violence, persecution or poverty, in search of a more secure life, only to find themselves in a prison cell. In 2010, the conditions in detention centres in Greece reached critical levels: undocumented migrants were being forced to live in converted warehouses or police cells crowded to three or four times their capacity. “No human being should be subjected to such treatment”, said Ioanna Pertsinidou, MSF’s emergency coordinator.