2011 was a year of multiple, complex, humanitarian emergencies, and almost all challenged our capacity to respond.

Protracted war, drought and restricted access to medical assistance or relief all contributed to a worsening of the crisis across south-central Somalia. From May to December, Doctors Without Borders/Médecins Sans Frontières (MSF) treated more than 95,000 people for malnutrition and over 6,000 for measles in south-central Somalia and in refugee camps in Ethiopia and Kenya. We vaccinated almost 235,000 children against measles and held more than 450,000 consultations.

Yet we still had enormous difficulties reaching the people we suspected to be in the greatest need. For the most part, we were limited to scaling up existing operations. In many places, we were blocked from opening new programs, while in others, insecurity prevented us from expanding. On October 13, 2011, two of our colleagues, Blanca Thiebaut and Montserrat Serra, were abducted from one of the Somali refugee camps in Dadaab, Kenya. At the very end of the year, our colleagues Philippe Havet and Dr. Andrias Karel Keiluhu were both killed while working in Mogadishu. Dedicated humanitarians, Philippe and Andrias had each worked for MSF for more than a decade. (For more on the challenges of working in Somalia, click here.) 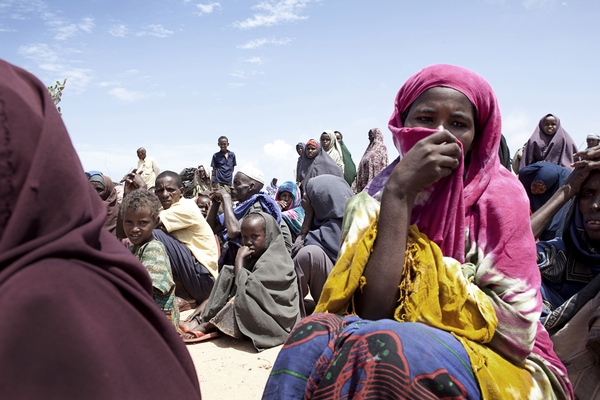 When the presidential election led to full-scale military conflict in Ivory Coast, clinics and hospitals were abandoned as people fled violence. "Many of the medical facilities in the western part of the country are not functioning because health staff have not returned to work and because they lack medicine," said Xavier Simon, MSF’s head of mission, at the time.

MSF teams provided healthcare through hospitals and fixed and mobile clinics across western Ivory Coast and in the city of Abidjan. They also brought medical assistance to Ivorian refugees in Liberia.

In the Democratic Republic of the Congo (DRC), violence and insecurity persisted throughout the year. Our medical staff tended to hundreds of thousands of people who had no other access to healthcare.

The DRC gained a new neighbor in 2011, as South Sudan achieved independence, but it too was afflicted by insecurity and an inadequate health system. MSF teams worked in seven of the country’s 10 states.

When conflict erupted in Libya, MSF supported health facilities in a number of towns with surgery, basic healthcare and psychological support. Teams also assisted some of the thousands of people who fled to Italy and Tunisia. However, it was weeks before we were able to work on both sides of the front line.

In Pakistan and Afghanistan, MSF teams continued to bring medical assistance to people caught up in violence, focusing on emergency medical care and surgery, as well as maternal and paediatric services.

In Bahrain, MSF staff brought basic healthcare to the homes of some 200 people, who were unwilling to run the risk of seeking assistance in public health facilities. But our movements were restricted. We spoke out against the arrest of patients and staff in hospitals and clinics, and called on the Bahraini authorities to respect their obligations regarding the provision of healthcare to the sick and injured.

The situation in Bahrain represented a new kind of context for our work: emergencies in middle-income, even wealthy, countries, which have good health systems. We adapted our response accordingly, providing short-term emergency assistance and filling specific gaps. In Egypt, MSF supported national health workers by donating supplies and training staff in emergency preparedness and response.

An earthquake and tsunami wreaked havoc in northeastern Japan in March. Again, MSF adapted its response to a new context. "The set-up with these very flexible mobile teams is responding to the needs," said Eric Ouannes, general director of MSF Japan. "Most urgent needs are covered...there are some gaps, and we are here to try to fill those gaps." Our teams targeted their support, helping to build a temporary clinic, conducting medical consultations and providing counselling.

In Latin America, MSF brought assistance to people displaced by flooding in Brazil, Guatemala and Honduras, donating relief supplies and operating mobile clinics. We also supplied aid in southeast Asia, after a typhoon in the Philippines and floods in Thailand. When Van province in Turkey was hit by earthquakes, we offered relief and mental healthcare.

MSF responded to many emergencies, but also continued to work in places where people endure situations of chronic crisis. In both Haiti and South Sudan, MSF is responding to a pressing need for specialist healthcare by investing in hospitals, in order to improve access to surgical care and other lifesaving secondary health services.

Basic healthcare still remains a priority. In the Central African Republic, we are supporting nine hospitals as well as 36 health centers. But both government and donor funding for health in the country is declining, although studies in 2011 revealed excess mortality rates in the town of Carnot—which has not suffered any particular crisis—to be three times the emergency threshold.

The high rates of mortality in the Central African Republic are caused by a high prevalence of diseases that can be prevented, and treated. Indeed, globally, outbreaks of some of the more common, treatable, infectious diseases, like measles and cholera, are increasing. However, our approaches to prevention and treatment have changed little in decades. MSF vaccinated over five million people against measles in 2011, and treated nearly 139,000 for cholera. But our response is inadequate: three million measles vaccinations in the Democratic Republic of the Congo could not prevent 129,000 people falling ill, and 1,500 dying.

We are advocating for a system that effectively anticipates and prevents outbreaks, and for improved treatment options, in order to be able to provide effective, good-quality care.

Our standards of care reflect the respect in which we hold our patients, but assuring these standards can be a challenge.

In Paraguay, our team temporarily had to stop screening for Chagas disease, as production of the drug used to treat it was halted. Chagas disease affects some 14 million people and kills 50,000 every year. Yet only one company, based in Brazil, produces benznidazole, the most commonly used medicine for Chagas. An international outcry prompted the Brazilian Ministry of Health to ensure production restarted. However, at the end of the year, there were still interruptions in supply.

As governments raise more regulatory barriers to imports, and ministries of health or other organizations frequently have their own sources of supply, quality assurance is becoming more of an issue in relation to the medicines we use. The increased risk was brought home to us when falsified antiretroviral (ARV) drugs, which had been purchased from one of the most reputable distributors in Kenya, one of the most highly regulated countries in East Africa, were found at an MSF clinic. MSF introduced a drug quality assurance system in 2002, but cooperation at a global level, with governments and other medical organizations, is required if we are to ensure that patients receive the quality medicines they need.

We also need the unprecedented international solidarity, which has resulted in improved treatment for millions of HIV, malaria and tuberculosis (TB) patients, to continue. With adequate funding, we can halt the spread of these diseases. But funding is declining. Just as we are poised to win the battle against some of the biggest problems in global health, obstacles are being thrown in our way. Safeguards in India’s patent law, which permit the production of affordable generic medicines, which in turn have enabled India to become the supplier of 80 percent of ARV drugs, are being challenged in the courts. In addition, the EU is trying to negotiate a free trade agreement that protects intellectual property at the expense of public health.

An alternative means of producing adapted, affordable medicines, voluntary licensing, is not proving to be the breakthrough we had hoped for. The first pharmaceutical company has joined the Medicines Patent Pool for ARV drugs, but so far every licence granting the right to produce generic medicines includes restrictions that prevent prices from being pushed as low as they could be. (For more on HIV care in 2011, see pages 22–24.)

2011 saw the closure of our longest-running mission: MSF left Thailand after 35 years in the country, as our team was unable to provide medical assistance to the undocumented migrants who needed it most. Since 1976, our programs in Thailand have been the scene of innovations and developments that have improved our emergency response worldwide (see pages 18–21).

2011 was also MSF’s 40th anniversary. Over the past four decades, MSF has grown to include some 30,000 people working in more than 60 countries. At our International General Assembly in December, we welcomed four new associations to our Movement: MSF Brazil, MSF East Africa, MSF Latin America and MSF South Africa. MSF now numbers 23 associations worldwide. Expansion has made us change the way we work. We have reformed our governance structure in order to improve our decision-making.

Our intention is to make sure that MSF remains both true to its founding principles and fit to respond to the humanitarian emergencies of the 21st century. The core values of humanitarianism, independence, neutrality and impartiality, first affirmed in 1971, continue to drive and inspire us to work for what ultimately matters: being there in the field, reaching that one person in crisis, and assisting their survival.