MSF is looking to expand the services and training it is providing at Ahmed Shah Baba Hospital in Eastern Kabul. 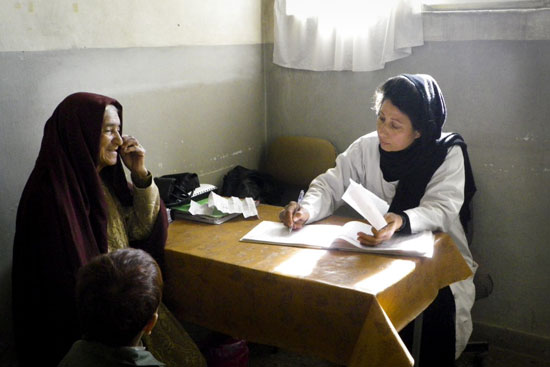 Doctors Without Borders/Médecins Sans Frontières (MSF) has been supporting the district hospital of Ahmed Shah Baba in eastern Kabul since October 2009. The population of Kabul has tripled over the last 10 years. Some people are fleeing conflict-torn areas for the relative safety of the capital, while others, pushed by poverty, are trying to make a living in Kabul. Returnees from Pakistan and other provinces of Afghanistan have also made their way back to the city. As a result, an already fragile health system suffering from almost 30 years of conflict has been stretched to its limit, leaving a great many people without access to medical care.

Beneath her iridescent blue burqa, Nasreen* from Ahmad Shah Baba Mena, is smiling because today, her one-year-old daughter, Laila, received complete vaccination for free. “Here, [seeing a] doctor is free and medicine is free,” she says. “I don’t even have my own home, but still, I was able to get my one-year-old child vaccinated and examined in this hospital. I am happy.”

Ahmed Shah Baba hospital is located in an area which, like the rest of Kabul, has seen a rapid increase in population over the past 10 years. However, other than private clinics, which most people cannot afford, the provision of basic health services remains lacking.

“It is written here on the card when I have to come back again, to make sure that Laila does not get sick,” explains Nasreen. All the necessary information is included on a card that allows the doctors to keep track of the child’s vaccination history. “There are so many people like me, who don’t have money, and can’t pay for help that they need. I used to ask people for money to go to the Bazaar [market] to buy medication, but now, I come here,” says Nasreen.

For the last five months, MSF expatriate and national doctors, midwives and nurses have been working together with the hospital’s medical staff to improve the quality of care that is being provided in this facility, with a particular focus on improving treatment protocols and emergency room and maternity services. Dr. Maria, an MSF pediatrician, has been part of the team supporting activities in Ahmed Shah Baba from the start: “For a doctor, this is definitely a different way of seeing a hospital. We have to balance hands-off with hands-on work, to combine supervision with management and direct support. The idea being to strengthen, reinforce and refresh without substitution. This is their hospital,” she adds, referring to the Afghan staff at Ahmed Shah Baba, “and these are their people.”

A crucial component of the work that MSF is doing involves taking the time to coach and train the staff of the hospital. In the maternity ward, for example, an MSF midwife conducts weekly training sessions for four midwives from the hospital’s team, covering topics like sterilization and correct material preparation.

An average of 400 consultations and 10 deliveries are currently taking place every day. “When we started, no patients were being seen after 11:30 am,” says Dr. Maria. “The situation is different nowadays. After a break from 12:00 pm to 1:00 pm, the consultations resume until 2:30 pm. At least 170 patients are being seen in the afternoon daily.”

In the early morning, hundreds of patients are given registration cards by a health promoter and a registrar who are trying to put a triage system in place. In order to ensure the quality of the consultations, no more than 60 patients are seen by each of the seven doctors working in the hospital. A quick glance reveals that women and children represent the majority of the patients. Dr. Maria explains that, “The two pediatricians are overwhelmed; they are seeing a lot of children. It is very difficult to turn people away, but we reassure them by saying that the hospital is open every day except Friday.”

One of MSF’s top priorities has been to get the emergency services running around the clock with doctors and nurses on duty every day and night of the week.

Chronic over-prescription of drugs is a challenge facing the MSF team in the hospital. “Changing prescription habits takes time,” says Dr. Maria Sarte. “It is not uncommon for six or seven drugs to be prescribed to patients who don’t need them. Today, an average of three drugs is prescribed per patient. We are hoping to reach a stage where, if someone is not sick, they are not given any drugs. Here, paracetemol is like candy.” The poor quality and counterfeit medication that is easily found at the market means that a lot of patients are spending the money they have on medication that does more harm than good.

Since the arrival of the MSF drug supply in January, 10,000 patients were seen in three weeks. “It is not just about giving out free drugs,” explains  project coordinator Sylvie Kaczmarczyk. “We want to provide quality treatment. The medication that is widely available here is suspect.”

In order to get the hospital to function fully as a district hospital, MSF has also been involved in repairing and rehabilitating key elements of the infrastructure. Still, addressing the logistical challenges of the building has not stopped the medical work from taking place; both construction and consultations are ongoing.

Soon, MSF will open a 30-bed inpatient facility with separate wards for males and females as well as an operations theater, which will have the capacity to carry out Caesarean sections. MSF is also looking to introduce a mental health component to the services provided at the hospital. This means that approximately 200,000 people from the area surrounding Ahmed Shah Baba will be able to receive a more comprehensive package of health care. “In the new building, we will put a proper triage room in place. Children waiting to be seen by a doctor will be ushered into a warm room where they will be weighed and measured. This will help us screen for malnutrition,” explains Dr. Maria. “We also plan to work with the health promoter in the hospital in order to use the waiting room as a way to raise awareness and promote health education. This means that the time the patients spend waiting will not go to waste.”

“Many people are coming to the hospital,” exclaims the hospital’s director Dr. Sattar, “Because drugs [are] free. Examinations, free. Doctors, free. OPD, free.” And he adds, “emergency, 24 hours [per day].”

MSF chooses to rely solely on private donations for its work in Afghanistan, and does not accept funding from any government. In addition to its support to Ahmed Shah Baba hospital in Eastern Kabul, MSF also supports Boost hospital in Lashkargah, Helmand province. In both locations, our aim is to provide life-saving and free medical care using effective drugs, working in all areas including maternity, pediatrics, surgery and emergency rooms.

MSF plans to extend its support to hospitals and rural health centers in other provinces in Afghanistan in 2010.

(* Names have been changed to protect the anonymity of the patients.)