MSF is supporting the regional Boost Hospital in Lashkargah, the capital of Afghanistan's Helmand province. 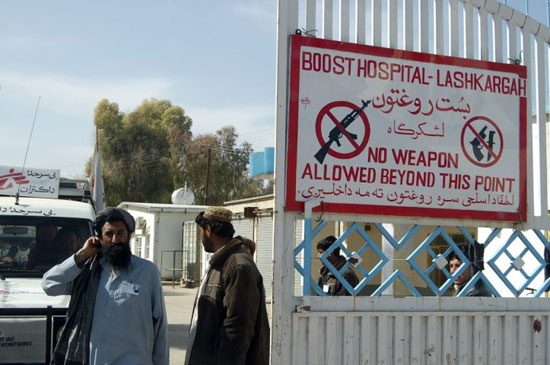 MSF's hospital in Lashkargah, Helmand Province, is a "no weapons" facility.

Doctors Without Borders/Médecins Sans Frontières (MSF) is supporting the regional Boost Hospital in Lashkargah, the capital of Afghanistan's Helmand Province. Our aim is to provide free, life-saving medical care in all areas, including maternity, pediatrics, surgery and emergency room service. Although the recent Coalition and government offensives into Marjah and Nad Ali have garnered a great deal of attention, the rest of Helmand has also been hit hard by the ongoing conflict. One of the most alarming consequences of the conflict has been that people across Helmand are being prevented from accessing medical care they desperately need.

“I arrived this morning at Boost hospital with my sick child,” says Fatima* while sitting in the pediatric ward with a baby in her arms. She is from the neighboring Nawa-i-Barakzai district. “I have three children, and this one is sick. She is five months old. My breast milk is finished. She is hungry, and I just don’t have anything to give to her at home.” 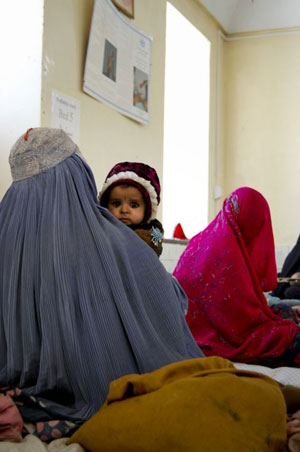 Inside the pediatric ward.

MSF began supporting the Boost hospital last November. Lashkargah’s roughly one million inhabitants have been among the people most affected by the conflict between Coalition and Afghan government forces and various opposition groups. The population has been trapped for years in conditions of poverty and has been generally unable to access medical treatment facilities, particularly those offering secondary health care. Public hospitals don’t function and private clinics are often prohibitively expensive. This has made it almost impossible for people to access proper health services. Boost hospital is one of only two remaining public referral hospitals in southern Afghanistan.

At first sight, the hospital seems to be in good shape, and medical staff can be seen going about their work. “But if you take a closer look inside, you find out that the hospital hasn’t been functioning and hasn’t been accessible to patients for a number of reasons,” explains Volker Lankow, coordinator of the MSF project here. There was a marked absence of free drugs in a place where the cost of medicine discourages people from going to the hospital for the care that they need. MSF has now started to support the provision of health services in the hospital, including maternity, pediatrics, surgery and emergency rooms, by providing free drugs. “I already hear from the community that it makes a big difference for the local population,” says Lankow.

Fatima’s presence at Boost provides a case in point: “I went to a clinic in town before but I had to pay for the medicines,” she explains. “I don’t have any money. Then a woman told me that I would get free treatment drugs here. That’s why I came.”

Now that free and quality drugs are available, effective systems of drug prescription need to be developed. One of the most important parts of MSF’s work supporting the Boost hospital will be to help the staff improve their treatment protocols. This will improve the efficiency of the whole operation and is urgently needed. An expatriate surgeon, an anaesthetist, a doctor, a midwife and a nurse are now working together with the hospital’s medical staff to improve the quality of treatment and to provide patients free and comprehensive medical services. “We have reorganized the waste zone and worked on the sterilization system for the operating theater. We have also set up a new room dedicated to ante- and post-natal care for women, as well as family planning. And there is still a lot of work to do to improve the sterilization and the global management of hygiene inside the hospital,” notes Lankow.

“But this is not only about implementing free care and reorganizing the hospital,” he adds. “We will also take time to train and coach the staff on how to use these facilities.” MSF’s goal is not to take over the 120-bed hospital. Instead, the objective is to ensure that staff is always present, and that high quality medical care and appropriate medicines are available free of charge. “For care to be comprehensive, it needs to be readily available,” Lankow says. “One of our goals is to propose a hospital that runs 24 hours a day, seven days a week. We need to ensure a permanent presence of medical staff and functional, free-of-charge services.”

An essential aspect of MSF’s work in Boost has been to ensure that the hospital is a safe environment. This has been one of the greatest barriers for people who would otherwise seek medical care. Fatima, who is staying at Boost for a couple of days to get treatment for her baby, says armed men are now staying in some clinics near her town, and that she is afraid to go there.

“One of our top priorities here has been to work on the No Guns policy inside Boost hospital,” explains Lankow. “Every day, people tell me that they are suffering from the war raging in the province, and that they have been afraid to enter a hospital full of people walking around with guns. Every patient has the right to be treated and to recover in a safe place, and we are working hard to ensure that the no weapon policy is respected.” At the entry gate of the hospital, a sign reading “no guns allowed” stands next to guards who make sure that all patients and visitors leave their weapons behind.

Today, Boost hospital no longer looks like a battlefield. No guns enter the health compound, and harassment of any kind is not tolerated. The inside of the hospital compound looks and sounds tranquil, despite the sounds of war that fill the air as helicopters maintain a constant presence in the skies. In the male ward, 45-year-old Nadeem* lies on his bed. He managed to leave Marjah in a Red Crescent taxi in the middle of the armed offensive. The car was transporting casualties in urgent need of surgery. He was not wounded in the conflict, but he does suffer from severe stomach problems and needed treatment. “There were no drugs or healthcare available in Marjah,” he explains. “The entire way I thought I was going to die—not because of my disease, but because of the shelling and the landmines. My wife and my children are in Marjah. As soon as I get better, I need to go back there. But it will not be easy to go back, since leaving to get treatment is so dangerous. I am very worried.”

“Insecurity has been a barrier for access to healthcare for a long time,” says Lankow. “The ongoing armed offensive in Marjah and Nad Ali will only make it more difficult, and we fear a lot of patients—war-wounded as well as all other patients who urgently need appropriate and affordable treatment—can’t access health structures like Boost hospital. Today, less than 50 percent of the beds of Lashkargah hospital are occupied, even though we know that the district hospitals in Helmand Province are barely functioning, if at all.”

While all attention during the last three weeks has been focused on Marjah and Nad Ali area, the ongoing conflict has been felt across Helmand, preventing people accessing adequate health care. MSF requests that all parties involved in the conflict allow all people in need of medical care access to functional medical facilities.

MSF chooses to rely solely on private donations for its work in Afghanistan, and does not accept funding from any government. In addition to its support to Boost hospital in Lashkargah, MSF currently supports Ahmed Shah Baba hospital in eastern Kabul. In both locations, our aim is to provide life-saving and free medical care using effective drugs, working in all areas including maternity, pediatrics, surgery and emergency rooms.

MSF plans to extend its support to hospitals and rural health centers in other provinces in Afghanistan in 2010.


* Names have been changed to protect the anonymity of the patients.