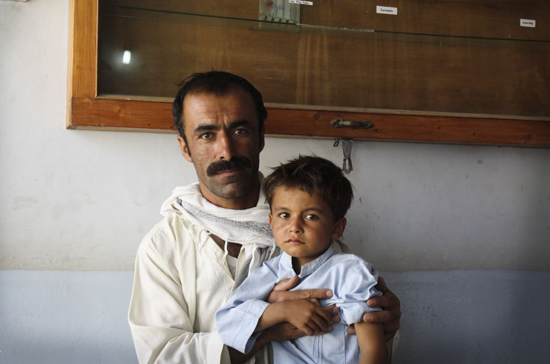 A father and son wait in the emergency ward at Ahmed Shah Baba hospital in eastern Kabul.

After leaving Afghanistan five years ago, Doctors Without Borders/Médecins Sans Frontières (MSF) has started working again in the country's capital, Kabul. The organization’s return this year was motivated by indications that the overall situation for Afghans was getting worse rather than better. Insecurity in Afghanistan has increased, and access to health services is problematic for many Afghans.

MSF is currently working in eastern Kabul in Ahmed Shah Baba hospital, which will be developed into a district hospital that provides a wide range of medical services, including emergency care. The hospital is located in an area that is experiencing rapid population growth as people seek relative safety from the conflict and hope to find work, as is the case for Kabul as a whole.

Soon, MSF will also support the ailing hospital in Lashkargah, the capital of Helmand province in the very heart of the conflict. Because of the hospital’s lack of staff and medicine, few people use it, despite the fact that it is one of only two remaining referral hospitals in the south of Afghanistan.

MSF left Afghanistan in June 2004 after the brutal killing of five of its staff in Badghis province. At that time, many had hoped that Afghanistan was on its way to recovery thanks to a major international investment in development aid. Today that hope has been crushed. The need for emergency medical assistance has once again become acute.