MSF is helping to provide much-needed emergency care for a growing number of patients in Helmand province. 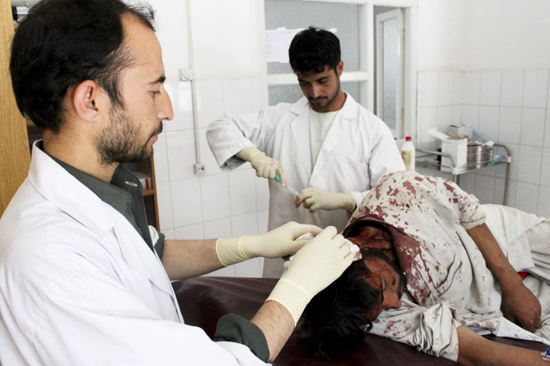 In southern Afghanistan, Helmand province’s one million inhabitants continue to suffer the effects of the ongoing conflict between NATO and Afghan government forces and various opposition groups. In Lashkargah, Helmand’s capital, where MSF has supported activities in Boost Hospital since November 2009, the need for emergency medical assistance remains acute.

Volker Lankow, MSF’s field coordinator in Helmand, explains that in the past, “The emergency room [at Boost] was only open for four hours in the morning, after which patients had to go to the inpatient department in the main hospital. There was also a huge shortage of medicines and functional equipment.”

That has changed, and now the emergency room, which was recently upgraded, is seeing and treating a growing number of patients. Dr. Khalid Rahman, a surgeon at Boost for the past four years, currently spends two days a week on rotation in the emergency room. In just two hours on a recent morning, Dr, Rahman and two nurse assistants saw 31 patients. “We get around four to five war-wounded a day, sometimes more, not to mention serious injuries from traffic accidents or domestic incidents."

“Lashkargah is a dangerous place but we don’t allow weapons in the hospital," Dr. Rahman adds, which makes it a refuge from the strife in the surrounding areas. Aasif, 40, brought his wife and 10-month-old daughter to Boost from the district of Marjah. (Patient names have been changed to protect anonymity.) As he watches Dr. Khalid remove his crying daughter’s stitches, Aasif explains: “My wife and child were travelling near Marjah when their car came under fire. My wife was shot in the leg, and my daughter was hit by a bullet in the leg and waist. They’ve been in Boost hospital for a month now, and my daughter’s getting her stitches removed today. We’re finally going home. It’s difficult to see my child still in this much pain.”

Boost is one of only two remaining public referral hospitals in southern Afghanistan. This means that those who need urgent medical care often have to travel long distances at great risk and expense. “I have had to spend a lot of money on transport,” confirms Aasif, “so it was a relief to be able to get my family treated for free.”

In another bed lies Nair, 40, a farmer from the outskirts of Lashkargah. He is barely conscious after he was attacked by a group of men, leaving him with deep wounds in the head. After Dr. Khalid sutures his gashes, he is given a change of clothing and dispatched to the hospital’s inpatient department for a few nights of observation.

Emergency response is a crucial part of a hospital’s services, particularly in a conflict area. “It is a 24-hour frontline that can stabilize patients and give them immediate care, after which they can then be referred to other departments for monitoring or specialized treatment,” asserts Lankow. Clearly there is a need: More than 4,000 patients have been seen in the emergency room since just this past May.

MSF chooses to rely solely on private donations for its work in Afghanistan and does not accept funding from any government. In addition to its support to Boost hospital in Lashkargah, MSF currently supports Ahmed Shah Baba hospital in eastern Kabul. In both locations, MSF aims to provide life-saving and free medical care using effective drugs, working in all areas including maternity, pediatrics, surgery and emergency rooms. MSF is planning on extending its support to hospitals and rural health centers in other provinces in Afghanistan towards the end of 2010.