MSF staff in Lashkargah have treated more than 1,500 children already this year. 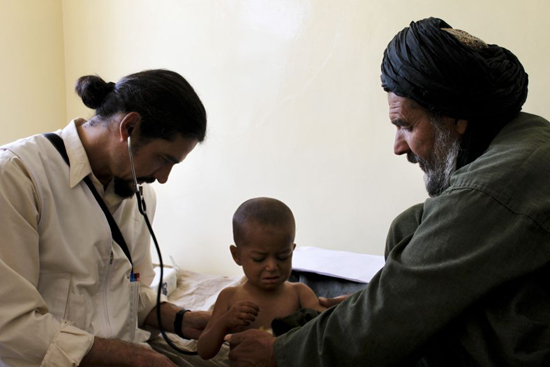 An MSF doctor tends to a sick child in Lashkargah's Boost Hospital.

In November 2009, Doctors Without Borders/Médecins Sans Frontières (MSF) began supporting Boost Hospital on the outskirts of Lashkargah, the capital of Helmand province in southern Afghanistan. At present, 300 patients are coming in every week to take advantage of the maternal, pediatric, and surgical services that are offered. Quality drugs are available as well.

The pediatric department admits nearly half of the hospital’s patients, 5 to 10 percent of whom are newborns requiring special attention. Overall, more than 1,500 children have been treated this year. “Pediatrics is one of the most important components of the hospital’s services,” says Dr. Dorian Job, MSF medical coordinator. “In Afghanistan, we often talk about the high levels of maternal mortality, when in fact child mortality can be up to 10 times higher.”

“We’re seeing around 20 children a day,” says Dr. Sergio Cabral, MSF’s pediatric doctor. “With only 16 beds in two wards, we’re stretched to capacity, so we put nine extra beds in the corridors. Clearly, this situation is far from ideal, which is why we are hoping to expand the pediatric ward soon.”

To that end, Dr. Cabral has been focusing on training the pediatric staff to carry out proper diagnosis and treatment. “Even simple coaching can help to change the way patients are managed here,” he says.

Fourteen-month-old Guhl was admitted in early July suffering from severe dehydration, malnutrition, and an infection (names have been changed to protect the anonymity of the patients). Her mother Jamila, 30, describes a pattern common among desperate parents in Helmand: “My daughter has had diarrhea for the last four months. We tried many private clinics that prescribed lots of different medicines which were very expensive, but nothing worked. When she became unconscious, they told me to bring her here.”

On arrival, Guhl was immediately put on a drip containing a mixture of salts, lactate and glucose, along with oral rehydration salts and special milk. “It’s a really simple treatment, but with a child as fragile as Guhl, it has to be given and monitored properly,” stresses Dr. Cabral.

“We advise staff here that simply giving antibiotics for diarrhea can be potentially fatal if they are prescribed incorrectly, whereas careful rehydration and feeding can be very effective,” he adds. Though the forms of treatment are not always mutually exclusive, in this case, “Guhl is awake and stable now. With children, small changes can mean big improvements.”

MSF chooses to rely solely on private donations for its work in Afghanistan and does not accept funding from any government. In addition to its support to Boost Hospital in Lashkargah, MSF currently supports Ahmed Shah Baba Hospital in eastern Kabul. In both locations, MSF aims to provide life-saving and free medical care using effective drugs, working in all areas including maternity, pediatrics, surgery and emergency rooms. MSF is planning to expand its support to hospitals and rural health centers in other provinces in Afghanistan towards the end of 2010.