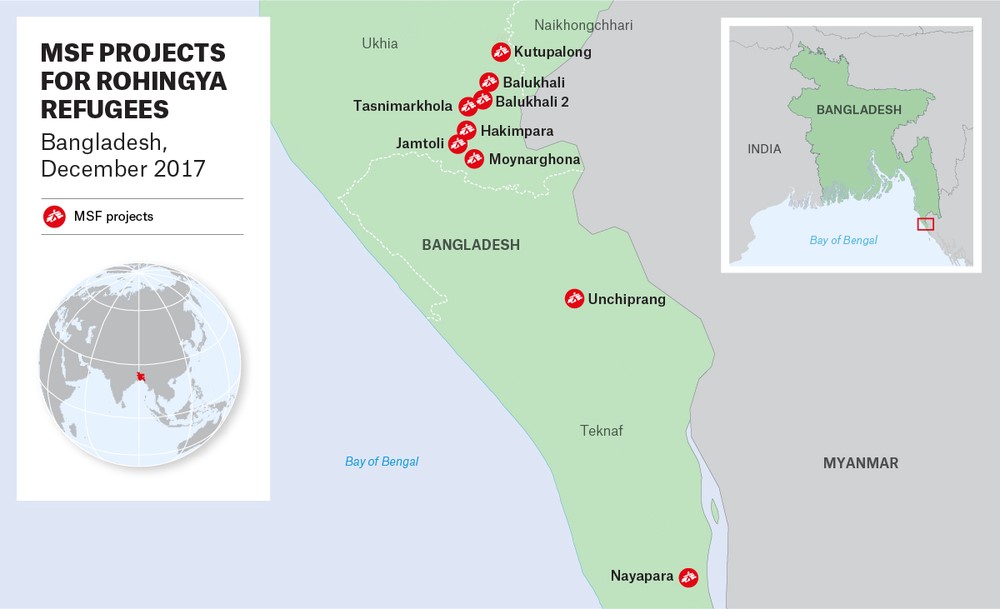 Since August 25, 2017, MSF has massively scaled up operations in Bangladesh’s Cox’s Bazar area in response to the escalating Rohingya refugee crisis. MSF teams are mainly treating respiratory tract infections, diarrheal diseases, and an increasing number of cases of infant malnutrition, which are directly related to the poor living conditions in the refugee settlements. As of the end of November 2017, MSF also recorded 2,165 cases of measles across all of its health facilities and more than 77 cases of jaundice.

The number of suspected diphtheria cases presenting to MSF health facilities has also increased sharply, with more than 2,000 cases treated as of December 21. The majority of patients are between five and fourteen years old. Without the diphtheria antitoxin (DAT), the disease can result in a high case fatality rate. There is a global shortage of DAT, and only a limited quantity of the medication has recently arrived in Bangladesh.

MSF has begun active case investigation to collect epidemiological data in most of the settlements where teams are working. Patient contacts are being treated prophylactically with antibiotics via MSF health facilities. Preparation and establishment of a reserved isolation area for suspected cases are ongoing. MSF has also expanded isolation capacity for measles and other infectious diseases in most of its facilities. The appearance of vaccine-preventable diseases like diphtheria in the Bangladesh settlements illustrates just how little access the Rohingya population had to routine health care in Myanmar.

To address the needs for inpatient capacity, MSF increased the number of beds at its existing facilities in Kutupalong and its newly built health facility in Balukhali and opened a new 25-bed inpatient facility in Tasnimarkhola settlement. This new facility is the only inpatient center in the area, with another planned to open near Moynarghona makeshift settlement. It is currently being used as a temporary diphtheria treatment center with an 85-bed capacity.

As part of its preparedness plans for potential outbreaks of cholera or other diarrheal diseases, MSF has identified sites for diarrhea treatment units in Balukhali, Hakimpara, Jamtoli, and Unchiprang. Site preparations are ongoing.

There are now more than 547,000 Rohingya refugees living across Kutupalong makeshift settlement (KMS), Balukhali makeshift settlement, and the KMS expansion area. MSF’s Kutupalong health facility, its largest in Cox’s Bazar district, has been operating since 2009. Services in this clinic include a 24-hour emergency room; an outpatient department (OPD); an inpatient department (IPD), including a pediatric and neonatal ward; isolation beds; a diarrhea treatment ward; sexual and reproductive health care services; a mental health department; and basic laboratory services.

Since August 25 IPD capacity has been expanded from 50 to 79 beds to cope with increasing numbers of patients. Isolation capacity was also expanded in preparation for the potential outbreak of communicable diseases. The OPD currently treats more than 300 patients per day.

MSF plans to further increase the number of beds available and improve the overall infrastructure in the hospital to meet the needs of the area’s growing population. Construction began in November and will continue into 2018.

MSF also built and manages three health posts in the KMS expansion area. These posts, located throughout the settlement to provide access to newly arrived refugees, treat over 300 patients per day.

At the end of October, MSF opened a 40-bed mother and child inpatient facility in Balukhali, near the existing outpatient clinic. In early December this new facility was converted into a diphtheria treatment center in response to the rapidly growing outbreak. MSF currently maintains 70 beds for treating diphtheria patients there. MSF also runs three health posts in the settlement.

Since October 1 MSF has run a health post in Balukhali 2, which is home to 285,000 people. This post provides basic primary health care, treating more than 18,100 patients from October 1 to December 11. On November 18, MSF opened a health post in the so-called SS zone for newly arrived refugees that treats an average of 170 patients per day.

More than 58,000 refugees live in Tasnimarkhola makeshift settlement, formerly known as Burma Para. MSF opened a health post in the area on October 26 and has since treated 12,400 patients (as of December 11). Around 30 percent of consultations are for children under five.

On December 3, MSF launched sexual and reproductive health activities (antenatal and postnatal care, treatment for survivors of sexual and gender-based violence [SGBV], gynecological consultations, and family planning). On November 26 MSF opened a 25-bed inpatient facility focused on pediatrics (care for children under 15 years old), inpatient treatment of severe acute malnutrition (10 percent of hospitalized patients), and the management of measles cases (55 percent of hospitalized patients). To accommodate the high number of measles cases, MSF increased the number of isolation beds to 36. By December 11, 320 patients had been treated in the emergency room, 171 (53 percent) of whom were hospitalized.

MSF also completed the drilling of four deep production boreholes to provide water to the health posts and IPD.

More than 23,300 refugees live in Unchiprang makeshift settlement, where MSF runs a primary health center that initially opened as a health post in mid-September 2017. The facility provides primary, sexual and reproductive, and mental health services with 24-hour capacity and 10 hospitalization beds. It is the main health care provider in the settlement, carrying out over 150 consultations daily. MSF also opened a second health post in Unchiprang and another in nearby Nayapara.

There are 48,400 refugees living in Jamtoli makeshift settlement. MSF opened a health post here in September, which was later expanded to a primary health care center. Up to 250 patients are treated at the clinic daily, and 24-hour primary health care service with a delivery room and 18 hospitalization beds are available. MSF also runs two health posts in Jamtoli.

There are more than 33,000 refugees living in Hakimpara makeshift settlement. MSF opened a health post here that was later upgraded to a primary health care center offering 24-hour service and 14 hospitalization beds. Teams at this facility treat around 150 patients per day. MSF also runs two more health posts in Hakimpara.

More than 19,500 refugees live in Moynarghona makeshift settlement. MSF opened a mobile clinic here in September, which has since been upgraded to a health post. Teams at this facility see 200 patients per day on average. MSF soon plans to open an IPD with a 63-bed capacity outside the makeshift settlement; the facility will offer an emergency room and a pediatric and inpatient therapeutic feeding center (ITFC) for both Rohingya refugees and the host community. This site has functioned as an 85-bed diphtheria treatment center since December 11. Construction work is ongoing.

MSF launched a mobile clinic at the border point in Sabrang on October 8, offering nutritional screening and basic primary health care and monitoring. These services have been integrated into the reception center.

MSF is supporting the Bangladeshi government in expanding routine vaccination in the camps by initiating vaccinations for children and pregnant women at MSF facilities. Staff at all MSF health facilities will have the capacity to administer immunizations for measles and rubella, oral polio, and tetanus, according to national protocols.

The Bangladeshi Ministry of Health launched a 12-day measles and rubella vaccination catch-up campaign on November 18 that targeted more than 336,000 children between the ages of six months and 15 years. MSF supported this campaign with community mobilization, site identification, logistics, and transportation of vaccines. A December vaccination coverage survey evaluated the success of this campaign.

Since August 25, MSF has treated 113 survivors of sexual violence at MSF’s Sexual and Reproductive Health Unit in Kutupalong. Thirty-three percent of these survivors were under the age of 18, including one patient under the age of ten.

Estimating the number of survivors is not possible. However, sexual violence is often underreported due to stigma and shame, fear of reprisals, lack of knowledge about the medical consequences and the need for timely medical care, and lack of awareness about the medical and psychological support available. Given these barriers, it is likely that the number of SGBV survivors MSF has treated so far is just a fraction of the true figure.

However, MSF teams are starting to see more survivors seeking medical care as some women and girls have become pregnant as a result of rape.

MSF has specialized staff on the ground to treat survivors who are referred for treatment as a result of trauma, including sexual assault and rape. MSF’s local community outreach workers visit the settlements to inform people about the free services the organization offers, including treatment for sexual violence.

In addition to the medical response, improving water and sanitation is a major part MSF’s efforts to prevent the spread of disease in Cox’s Bazar. According to the World Health Organization, 91 percent of household and 60 percent of source water samples were contaminated with Escherichia coli (E. coli). Due to the lack of a drainage system, stagnant water is present in around one quarter (26 percent) of all tube wells. As for sanitation, 39 percent of emergency latrines installed by WASH partners, mostly at the early stage of the emergency response, are no longer functional. De-sludging and decommissioning of these latrines remains a priority to improve the inadequate sanitation environment.

MSF is targeting its water and sanitation response in the most difficult-to-reach areas, building 1,247 latrines, 157 water wells, and a gravity water supply system in settlements located in the north and  south of the district.

MSF aimed to install a total of 400 boreholes and 1,000 latrines in the Balukhali and Kutupalong makeshift settlements by the end of December. However, given that the shallow aquifer—the main water source, abundant in quantity and easy to access—is contaminated with fecal coliforms throughout the camps, teams were forced to drill deep production boreholes (up to 200 meters deep) to reach clean water. Four such boreholes have been drilled so far.

MSF plans to start hygiene promotion to clean latrines and educate people about the importance of hand washing, as well as to provide soap and other non-food item distribution in MSF facilities. To ensure that vulnerable populations can access clean drinking water, MSF plans to distribute water filters in its clinics in Tasnimarkhola and Balukhali 2 for malnutrition and measles patients and pregnant women. In the southern settlements of Unchiprang and Jamtoli MSF aims to construct 56 more latrines and 43 wells in the coming weeks.

MSF also includes water supply and sanitation in its emergency response for new arrivals. MSF has deployed teams to arrival, transit, and settlement locations to ensure that newly arrived refugees have access to safe drinking water and adequate sanitation facilities.