Bangladesh: Rohingya Face a Resurgence of Abuse and Displacement 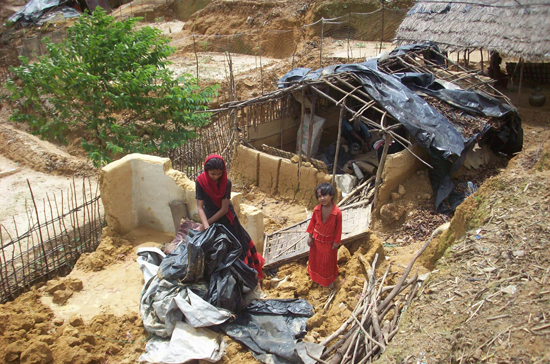 Bangladesh 2009 © MSF
Rohingya people from Myanmar pick up the what is left of a shelter in Kutupalong makeshift camp after police destroyed more than 250 homes.

On Tuesday, July 14, Doctors Without Borders/Medecins Sans Frontieres (MSF) witnessed a group of approximately 30 police officers and local officials enter the Kutupalong makeshift camp in Cox’s Bazaar, Bangladesh, and destroy 259 homes, looting people’s possessions in the process. Other residents of the makeshift camp were told that they had 48 hours to leave or their homes would be burned down.

The camp is home to thousands of unregistered Rohingya, a Muslim ethnic minority originating from Myanmar, who are denied citizenship and suffer persecution and discrimination in Myanmar.

The incident is another in a series of aggressive and abusive moves by the authorities against the Rohingya. In late June, thousands of people were forcibly displaced from their homes, some of them violently. During this time, MSF treated numerous people for injuries in its clinic at the camp, the majority of whom were women and children. MSF released a press release on June 18. “The systematic use of intimidation, violence, and forcible displacement against residents of the makeshift camp is absolutely unacceptable,” said Paul Critchley, MSF head of mission in Bangladesh.

The Rohingya population at the Kutupalong camp have been told that they cannot live next to the official refugee camp, supported by the Bangladesh Government and the United Nations High Commissioner for Refugees (UNHCR). Nor can they legally live on adjacent Forestry Department land.

“This vulnerable population has fled persecution and discrimination in Myanmar, only to be left unrecognized and unassisted in Bangladesh,” Critchley said. “They have gathered in Kutupalong, one of many unofficial makeshift camps to have formed in recent years, to seek refuge and in turn found only fear and abuse.”

Officials claim to be clearing areas of the makeshift camp in order to create a 100-foot buffer zone between the official UNHCR refugee camp and the makeshift camp. This zone has since expanded, threatening the living space of thousands more people. Unable to move onto the adjacent Forestry Department land, people are left with nowhere to live and nowhere to go.

A durable and dignified solution for the Rohingya must be found, not only in countries where they seek asylum, but at their origin in Myanmar.

Over the last 20 years, hundreds of thousands of Rohingya have fled their homes to seek refuge abroad. Few have been granted refugee status. The majority struggle to survive, unrecognized and unassisted, in countries such as Bangladesh and Thailand.

MSF has worked in Bangladesh since 1992, most recently setting up a basic health care program in the Chittagong Hill Tracts, assisting victims of Cyclone Aila, and implementing an emergency intervention to assist unregistered Rohingya in Kutupalong makeshift camp.  MSF also provides services to the host community.