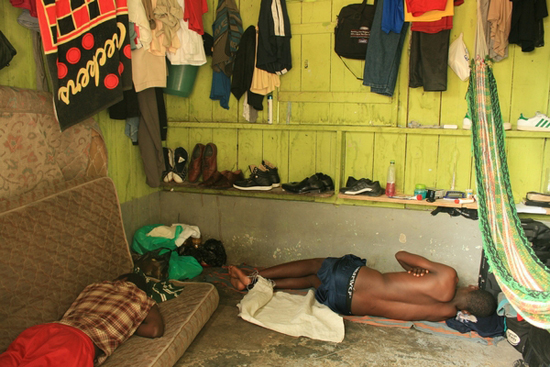 This small room, part of a 12-room compound, is home to five Haitian asylum seekers who are not allowed to work or leave Tabatinga.

Doctors Without Borders/Médecins Sans Frontières (MSF) is providing humanitarian aid to Haitian asylum seekers in Tabatinga, a town in the state of Amazonas, Brazil. MSF teams have been monitoring the situation of Haitians in this small town, located at the border between Brazil, Colombia, and Peru, since November. In December, MSF started distributing more than 1,300 personal hygiene kits and other relief items.

The Haitian asylum seekers first began arriving in Tabatinga in March 2010, escaping a country devastated by a massive earthquake. More than 1,200 Haitians are currently staying in the town, two-thirds of whom say they were directly affected by the earthquake and came to Brazil in hopes of helping other family members who stayed in Haiti.

“Before the earthquake, the situation was already difficult in Haiti. Now, there is nothing left, there are no opportunities. But having to wait in Tabatinga is even worse,” says 32-year-old Olga, from the small room she shares with four other Haitians.

While they wait for an interview with the Federal Police in Manaus, the Haitians are not allowed to work or to leave Tabatinga. Many are living in extremely poor conditions, after spending all their savings on the journey to Brazil.

“I visited a house where 40 people are sharing one latrine. In another residence, there are a lot of tiny rooms, without proper light or ventilation, where up to five people have to sleep. It is really hard to maintain minimal hygiene in conditions like this,” says Renata de Oliveira Silva, MSF’s project coordinator in Tabatinga. “Our biggest concern is that these living conditions are having serious effects on the physical and mental health of these people, such as stomach infections or psychological disorders.”

Without any assistance from government authorities, the Haitian asylum seekers are reliant on the goodwill of local people and the help offered by a few civil society organizations.

“The federal government needs to take responsibility for providing aid to these people, who are not allowed to work while they have to wait in Tabatinga,” said Tyler Fainstat, executive director of MSF Brazil. “Also, local and state authorities should proactively help to find a solution to the situation of Haitians in Tabatinga.”

After the plight of the asylum seekers was raised at the national level, the Brazilian Justice Ministry announced that some 4,000 Haitians who had arrived in the country since the devastating quake would be granted residence and work visas. This includes 1,600 migrants that had already been authorized to stay and some 2,000 more that are in the country illegally.

MSF launched the largest emergency aid operation in its history in the aftermath of the January 2010 earthquake in Haiti, in which it attended more than 358,000 patients, carried out about 16,000 surgeries and assisted the birth of 15,000 babies. In the 12 months after cholera broke out in Haiti in October 2010, MSF treated more than 160,000 cholera patients, or 35 percent of the total cholera cases reported in the country.