MSF’s diagnosis was that incidence of the disease is indeed higher, which prompted the organization to reinforce its response in the area. 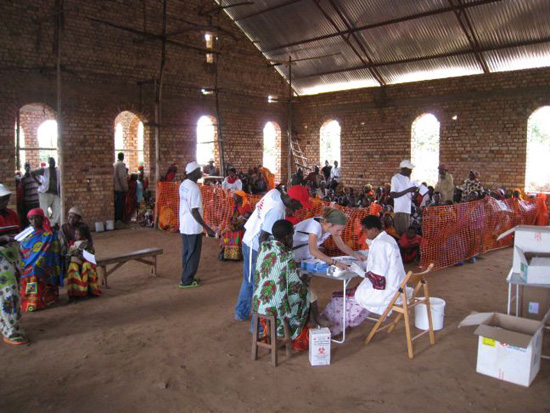 MSF teams in Burundi's Kayanza province assessing and treating patients in the midst of a rise in the incidence of malaria.

In recent months, as heavy rains have fallen and mosquito populations have grown, malaria has been on the increase in the northern province of Kayanza, on the border with Rwanda. At the end of December, health authorities called upon Doctors Without Borders/Médecins Sans Frontières (MSF) to conduct an assessment. MSF’s assessment was that incidence of the disease is indeed higher, which prompted the organization to reinforce its response in the area.

Since mid-January, three MSF teams have been running mobile clinics in six sites, in three affected districts, Kayanza, Gahombo and Musema. These teams offer on-site diagnoses (using a rapid malaria tests), provide treatment, and refer severe cases to the hospital. Thus far, the teams have seen 2,000 patients. Nearly two-thirds tested positive for malaria. More than a quarter of the positive cases were children.

“Symptoms of the disease include high fever, body aches and headaches,” says Goddy Efula Bomana, MSF Emergency Coordinator in Burundi. “However, this can quickly evolve in some patients into severe malaria with convulsions, coma and possible death. That’s why treatment within the first 24 hours is so important, especially for children.”

“However, it’s quite remote here,” she continued. “Some have to walk up to 10 kilometers”—six miles—“just to get the simple test in their nearest health centre. For that reason, mobile clinics are the quickest way to reach people, and [they] allow us to refer patients to the hospital.”

Distance is not the only barrier to accessing healthcare. Cost is also an issue. Malaria treatment in clinics and health centers is not free for adults, so many people simply can't afford it. Poorly protected families, who often lack prevention means such as mosquito nets, adds also to the problem. The public hospital in Kayanza is overloaded, with more than 100 children in a pediatric ward that normally has a capacity of 40. At the request of the authorities, MSF will increase the hospital's capacity in the coming days, and both are discussing free access to malaria treatment. The number of mobile clinics teams will be doubled, as will be the number of sites covered.

MSF has worked in Burundi since 1993. In addition to its Centre for Obstetrical Emergencies in Bujumbura Rural province, MSF responds to medical emergencies in the country, as in 2009, when a nutritional crisis hit the province of Kirundo.