CAR: A Day in the MSF Hospital in Paoua

Follow Dr. Frédérique Eygonnet through one day at MSF's Paoua hospital, the only hospital serving the approximately 120,000 residents of this subprefecture in the Central African Republic. 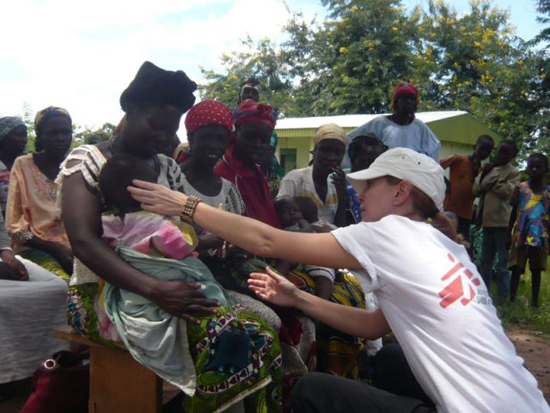 An MSF staff member and patient at the Paoua hospital.

Doctors Without Borders/Médecins Sans Frontières (MSF) manages the only hospital in Paoua, Central African Republic (CAR), which has a population of approximately 120,000. MSF teams work with the Ministry of Health in all hospital departments, which include pediatrics, surgery, maternity, emergency, hospitalization and outpatient care, and treatment of tuberculosis and HIV.

It is 7:30 a.m. at the MSF hospital in Paoua, a town in northwestern Central African Republic. This is the time when the night shift updates the arriving day team on the night's developments. The doctor on duty explains the cases of the patients hospitalized during the night in the different units. He asks his colleagues' advice and opinions regarding any problems.

After this briefing, around 8:00 a.m., Dr. Frédérique Eygonnet heads to the pediatrics department, which she oversees. "Paoua is the only hospital in the region," she explains."Patients come from the city, but also from health centers located on the outskirts, about two hours away. On average, we receive four to five patients every day who have been transferred by motorbike from our health centers."

The hospital has approximately 155 beds. It includes several buildings that house the medicine, surgery, maternity, malnutrition, and pediatrics departments. One wing has been designated the "TB village," and is reserved for patients with tuberculosis. Another is dedicated to patients living with HIV.

A dozen motorcycles are parked in the central courtyard under a tree. They are used to transfer patients from the clinics that MSF manages in the bush near the Paoua hospital.

Dr. Eygonnet and Dr. Neema Kaseje, the surgeon, visit the patients who have had or are awaiting surgery. Dr. Kaseje tells her colleague that she was called twice the previous night: "Around 11:00 p.m., I was called in to see a patient who suffered a skull fracture in a fall. I came back later that night to perform a caesarean. But that's pretty standard. I don't have anything special to report today."

Next, accompanied by the nurse and the nurse's aid, Dr. Eygonnet visits the pediatric intensive care unit and the neonatology unit. She asks about each patient, speaking to the mother and the night nurse. She is particularly concerned about a newborn in the neonatology unit. This little girl was born three days earlier and suffers from respiratory insufficiency. Dr. Eygonnet asks the nurse to do an X-ray exam.

A bit further off, two newborns lie in bed under the worried, watchful eye of their mother. They are both ill with malaria, and the destruction of their red blood cells by the malaria parasite has caused them to become anemic. They need blood transfusions. Malaria is one of the leading causes of hospitalization here. When left untreated, it causes anemia and many deaths among children under five years old.

"The visits take a long time," she says. "The department is very crowded and there are often two children to a bed. My visits are regularly interrupted by emergencies. Most of the time they involve children with severe malaria anemia, who must be transfused very quickly."

Gaspard, a two-year-old boy, lies in another bed in the ward. He was admitted for severe anemia brought on by malaria. He also presented with marasmus, a severe form of malnutrition. He needs a transfusion right away and treatment for the malaria.

"In certain cases of severe malaria—the neurological form, for example—children have convulsions or sometimes fall into a coma," Dr. Eygonnet says. "When I started my mission, everything was very intimidating and stressful. It felt like we couldn't manage anything, that we were courting catastrophe. And then, very soon, we realized that we were developing automatic responses and we would perform cardiac massage on infants, calmly, without even breaking a sweat."

It's almost 3:00 p.m. and time to walk back to the MSF base, located not far from the hospital. Dr. Eygonnet is on duty tonight. She is making preparations to go back to the hospital in case of emergencies—but if she returns she'll have to drive there, as it’s not safe to go out on foot at night.