CAR: "The town and the hospital felt completely deserted"

We brought therapeutic foods, milk, medicines and logistical supplies, such as tents, because we had no idea what we would find there. When we arrived, the hospital team greeted us warmly. They seemed very relieved to see us. We got to work the next morning. 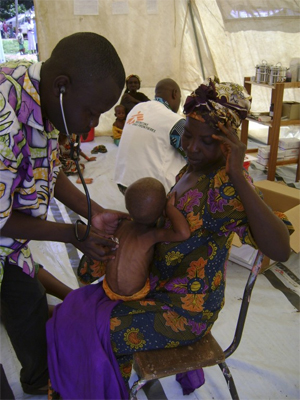 A mother and child are treated at a MSF feeding center in Boda in the country's southwest.

Doctors Without Borders/Médecins Sans Frontières (MSF) teams have been treating malnutrition in the Carnot area, a city in southwestern Central African Republic (CAR), since late July. By the end of August, nearly 530 severely malnourished children had been admitted into the project, and more than 190 of them required hospitalization. Three outpatient treatment centers were added to the original facilities. Annie Gadan was part of the first team that established the project. She describes the first phases of that visit and shares some of her impressions.

How did you learn that the nutritional situation in the region was cause for concern?

In mid-June, the physician-director of the Carnot hospital issued two warnings on the local radio station. The previous month, when he had assumed his position, he found that the nutritional situation in the region was very serious and that the hospital was seeing cases of severe malnutrition. Many people came to the hospital after hearing his radio messages. The medical teams treated several dozen severely malnourished children at no charge. In CAR, patients typically pay for health care, including medicine, nursing services, and, possibly, doctor's fees and hospital expenses.

The Ministry of Health held a meeting in Bangui for several aid actors working in the country. Action Against Hunger and MSF decided to conduct a rapid nutritional assessment in early July and found that the rate of severe malnutrition, above 20 percent, was very troubling. Although this figure cannot be generalized to the subprefecture's entire population, the rate of severe malnutrition is, nonetheless, quite disturbing. The crisis is thought to affect the entire prefecture. Additional activities are underway in neighboring subprefectures.

"As I made my rounds, I discovered a sort of ghost town. Most businesses were closed and the town was nearly deserted."

What happened when you arrived in Carnot?

We arrived there on the night of July 22, with enough supplies to treat approximately 72 children, both in the hospital and on an outpatient basis. We brought therapeutic foods, milk, medicines, and logistical supplies, such as tents, because we had no idea what we would find there. When we arrived, the hospital team greeted us warmly. They seemed very relieved to see us. We got to work the next morning. The logisticians set up the hospitalization facilities for children; the doctors met their first patients; and I visited the authorities. As I made my rounds, I discovered a sort of ghost town. Most businesses were closed and the town was nearly deserted. Before arriving, we had studied the region and had heard that Carnot, known for its diamonds, was in the midst of a difficult economic situation and that diamond mining and the diamond trade were in a state of crisis. That became clear as I traveled through the city. While Carnot might have been a boomtown once, that's no longer the case today. The town and the hospital felt completely deserted.

What happened when you set up operations at the hospital?

We already have 42 severely malnourished children, with their families, at the hospital. The doctors made a first round of visits. Nearly half the children they saw could be treated at home and did not require hospitalization. We organized a therapeutic feeding center for those who did. Since the first days, the medical consultations and admissions increased. We decided to assess the nutritional situation starting on August 1, both in the town of Carnot and in rural areas. We found a 10 percent rate of severe acute malnutrition in Carnot, but the statistics gathered in the surrounding villages revealed a much lower rate. A nutritional survey, with a retrospective mortality study and a food security evaluation, are currently underway.

How do people describe their situation?

Everywhere we went, people referred first to their economic problems. They talked about the global crisis and the collapse of diamond prices. Many people earned their living from mining, but everything suddenly came to a halt at the end of last year when many of the diamond-buying offices were closed. The situation worsened sharply in early January, which prompted people to redirect their energies to farming. In this region the primary crop is manioc and most people did not have the resources to diversify their planting by adding beans, squash, peanuts, and other crops. During busy mining periods, huge quantities of food, including manioc and vegetables, are imported from other regions, but the market is flooded with local manioc now and prices have collapsed. The people’s diet is quite limited and is composed primarily of manioc and leaves cooked in water. Meat is out of reach in the market. Other key ingredients, like oil, are very expensive. Access to food for households affected by the economic crisis is certainly problematic.

What other factors explain this worsening of the nutritional situation?

The rainy season began in June, one month late. The women said that May was very dry, which harmed the crops. Other than manioc, households currently have few, if any, food reserves. People who planted peanuts and corn at the beginning of the year harvested in August.

The other problem is livestock. You don't see many animals here. It's not always easy to find eggs and when they are available, they're expensive. However, meat would be part of people's regular diet. In the dry season, the Fulani used to graze their herds in this region. They stopped in 2007 when roadside banditry was prevalent around Carnot. It seems that people suffered considerably under those unsafe conditions. Many people living in rural areas fled to Carnot at that time and never went back.