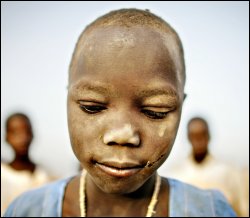 Around 110.000 refugees from Darfur have crossed the border into Chad. Medecines Sans Frontieres provides help in small mobile clinics, both to the refugees and to the local population. Photo © Espen Rasmussen

New York/Ndjamena, May 11, 2004 - Hunger and disease are severely endangering the lives of tens of thousands of Sudanese refugees in Chad, according to the international medical aid organization Doctors Without Borders/Médecins Sans Frontières (MSF) today. Malnutrition is rising, camps are overcrowded, food and water are scarce, and many people remain at risk from violent cross-border attacks by Sudanese militia. The refugees have fled extreme violence and massacres in the Darfur region of western Sudan, where a massive mobilization of humanitarian aid is also urgently needed.

Even though the United Nations High Commissioner for Refugees (UNHCR) and international non-governmental organizations (NGOs) have had teams in Chad for months, progress has been painfully slow as the crisis escalates.

"We have been urging the international aid community to make a more determined effort in Chad since January," said Donatella Massai, coordinator of MSF's programs in Chad. "It seems that the message has not been heard, so we are repeating it louder. People's health has deteriorated because the organization of water, food, and shelter has not been sufficient. If dramatic measures are not taken immediately, there is a very great risk that the situation will worsen, especially given the approaching rainy season."

"The level of malnutrition is now climbing every week," said Jean de Cambry, who just returned from the Chad/Sudan border as MSF's emergency field coordinator. "In mid-April, we were admitting three or four children in Iriba with severe acute malnutrition* into our therapeutic feeding center (TFC) each week. Now we admit nearly twenty-five. Paradoxically, the nutritional situation for many refugees is generally worse inside refugee camps, several of which are operating way beyond capacity. Some camps designed for 6,000 people are holding twice that number, which means that food supplies intended to meet the needs of 6,000 people now have to stretch much further and are not nearly enough."

Thousands of refugees also have no access to clean drinking water, according to de Cambry. "In our health facilities in Tine, Birak, and Iriba we are seeing rising numbers of patients with bloody diarrhea," he continued. "The situation is very dangerous, especially for the many children and adults who are already malnourished. This is exacerbated by inadequate sanitation facilities. In one camp, there is only one latrine for every 400 people - 20 times greater than the international standard of a maximum of one latrine for 20 people. Its just unacceptable."

Tens of thousands of refugees still have not been moved to safer areas away from the border and remain at risk of attacks that often turn violent. Sudanese militias cross the border from Sudan into Chad and loot refugees' possessions and steal cattle. "Many people are injured or killed in these cross-border raids," de Cambry said. "They have no protection whatsoever. People have also been killed trying to return to their homes in Sudan searching for food."

MSF again calls for a significantly more determined and urgent relief effort in Chad and Sudan's Darfur region. "More supplies, more staff on the ground, greater efficiency by UNHCR and international NGOs, whatever it takes," said Donatella Massai. "The plight of people in Darfur and Chad should be the absolute top priority of the international aid community right now."

* Severe Acute Malnutrition is defined by: weight/height < 70%; a Mid-Upper Arm Circumference (MUAC) measurement () of < 110mm; or the presence of bilateral edemas.

MSF has been working in and around the border towns of Tine and Birak since October 2003, and started working in Iriba, 50 miles west of Tine, in April. MSF teams are also working in the Adre region and south in Daguesa. Doctors and nurses at the MSF health center in Tine perform 350 consultations per week. Teams perform more than 300 consultations every week with mobile clinics to surrounding villages hosting pockets of refugees and to refugee camps in Iridimi and Touloum. A meningitis vaccination campaign that began in mid-April vaccinated 40,000 people within two weeks. At Iriba hospital, MSF provides secondary health care for refugees and native Chadians, and runs a Therapeutic Feeding Center (TFC) and a Supplementary Feeding Center (SFC). MSF is also running a health clinic, TFC and SFC in Birak, performing over 300 consultations in the clinic each week. A mobile clinic is sent regularly to Senette, a settlement outside of Birak. Around Adre, MSF works in four clinics along the border and supports Adre hospital, where three surgical interventions are performed every day. MSF also provides medical care and is setting up a water distribution system at the Farchana relocation site. In Daguesa, MSF has set up a nutritional center and is supporting the health center.