BANGUI, CENTRAL AFRICAN REPUBLIC/NEW YORK, JUNE 20, 2017—Despite a peace agreement signed yesterday between the government of the Central African Republic (CAR) and different political and military groups active in the country, Doctors Without Borders/Médecins Sans Frontières (MSF) teams are witnessing renewed fighting today in the town of Bria, in the east of the country, amid ongoing tensions elsewhere. Violence flared as international donors were meeting in the capital today to discuss funding urgently needed humanitarian efforts.

The latest fighting in Bria comes after clashes in the town a month ago that led to the displacement of 41,000 people out of a total of 47,000 inhabitants. Left with little assistance, most have not returned home: about 6,000 people sleep overnight in the hospital compound, while about 25,000 stay at a site called PK3, near a UN base.

MSF teams in Bangassou and Alindao also reported gunfire today. The security situation in the country remains extremely volatile. CAR has been sliding back into a humanitarian emergency with renewed and intense fighting in several locations across the country, provoking massive displacement on a level not seen since 2014.

As institutional donors meet in Bangui, MSF reiterates its call to scale up the provision of emergency humanitarian assistance in the country, as the needs are greater than ever. (MSF is not raising funds at the Bangui meeting as it relies on private donors to fund its work in CAR.) In the areas affected by violence, the provision of aid needs to be switched from a long-term approach to urgent humanitarian assistance. Funding of emergency humanitarian aid has been reduced in CAR in favor of development, while only a fraction of the emergency funding promised to the country has reached it.

Read More: Central African Republic: “I’m a Civilian, Not a Fighter. Why Did They Attack Me?”

The medical and humanitarian consequences of the renewed conflict are becoming more apparent. Civilians are victims of attacks and counterattacks based on their ethnicity or religion, as they are perceived as supporting various armed factions. There is a blatant disregard for international law in the conduct of hostilities, particularly the targeting of civilians, the burning of houses and villages and the unprecedented level of panic being inflicted on communities.

Whereas 20 percent of the population was already displaced inside or outside CAR before this phase of renewed conflict, 68,000 additional people have been displaced within the country and 20,000 more have crossed into Democratic Republic of Congo since mid-May, according to the UN refugee agency UNHCR. This has brought the number of internally displaced people nationwide to over 500,000, the highest number since August 2014.

New sites for displaced people are not adapted to their needs and lack basic services such as water, latrines and shelters, increasing the risk of epidemics.

People are seeking refuge in hospitals, churches and mosques, but are also hiding in the bush for long periods of time. In addition to the most visible victims of the conflict (such as wounded people), MSF sees the direct consequences of violence on the health of the civilian population: children are not able to reach medical facilities during malaria season; regular vaccination campaigns and HIV and tuberculosis treatment are interrupted, and pregnant women are left without assistance when they deliver.

MSF calls for unhindered access to those affected by the violence and calls for respect of the neutrality of health facilities, including ambulances and referral systems.

MSF has worked in the Central African Republic since 1997 and provides life-saving medical care to those who need it across the country. MSF is a neutral, independent and impartial organization which relies on private donations to fund its work in CAR. 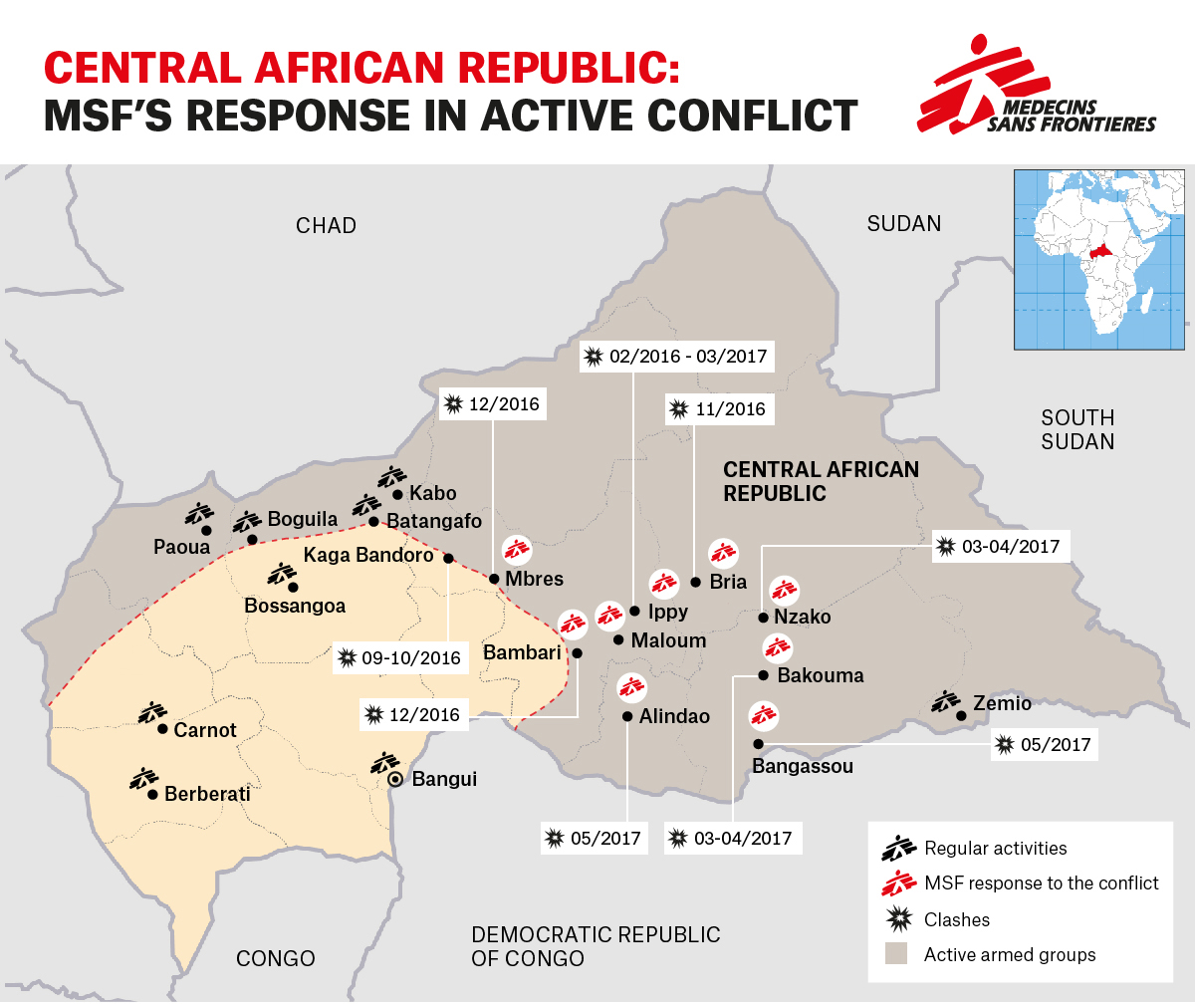