In eastern Chad, MSF assists thousands from across the border 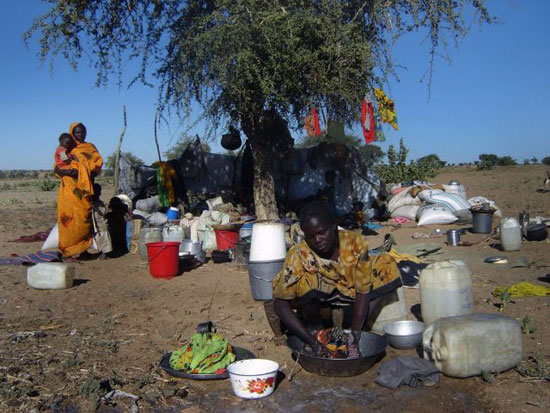 In Birak, a displaced mother and her children have set up camp under a tree.

In February, bombings and attacks on villages in parts of West Darfur, Sudan, led to an influx of thousands of refugees into the Birak region of eastern Chad.

Doctors Without Borders/Médecins Sans Frontières (MSF) teams have been providing assistance by distributing essential relief items to the refugees, including: more than 2,500 blankets; 1,600 plastic sheets; 1,600 jerry cans for water; 2,000 mats; soap; and nutrient-fortified, ready-to-use foods (RUF) to prevent and treat malnutrition. By the end of February, the MSF team had treated 51 wounded people in the Birak health center. For now, morbidity and malnutrition rates are normal for the area.

Now, the MSF team is preparing a complementary distribution of essential items as a new wave of refugees has arrived in Birak from the Jebel Moon region in Darfur. Mobile clinics will be carried out to provide access to medical care. Additionally, MSF will organize a measles vaccination campaign alongside a distribution of RUF for moderate and severely malnourished children under five years of age.

“Each of us escaped alone. You were lucky if you had enough time to take your child with you. We left without looking back.”

— Fatima, a 60-year-old grandmother in Birak

They just escaped bombings in Darfur, but have no other choice than to return home in order to get the most urgently needed supplies. Sudanese refugees who recently arrived in the Birak area of eastern Chad remain in a critical situation. Indeed, their villages were burnt down, their goods plundered, and their family members killed or wounded. They escaped and took refuge a few kilometers across the border, hoping to find a secure place to stay. Nevertheless, assistance in this unstable region is extremely restricted. Today, they have limited resources, so they risk their lives going back to look for food in the ruins of their villages in Darfur.

“It was Friday; we went praying,” says Ibrahim, from Seleah village in northern Darfur. “Suddenly, airplanes started bombing. Right after, army pick-ups and men on horseback entered the village. They started shooting people and pillaging. We took refuge in our bedroom, but some of the militias followed us and took everything. When they tried to take my wife’s blanket, she refused to give it , saying that it was for the children. They shot her. Then they took everything, even our horse, and they left.”

“Bombings started on Tuesday with airplanes and helicopters,” explains Zara, a 26- year-old woman from a village in the foothills of the Jebel Moon. “We took refuge in the mountain, but militias followed us and killed many people. I was hiding in a cave. One of them entered to have a look. When he saw me, he shot. I got a bullet in my leg and one in my arm. My son died on my back. He was 18 months old.”

They left without anything 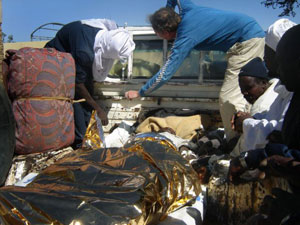 MSF workers transfer a wounded person to a health center in Guereda.

In the panic that followed, several families were separated.

“Those who died, we left them behind. We even had to leave behind some of the wounded,” remembers Fatima, a 60-year-old grandmother who arrived in Birak on February 20. “Each of us escaped alone. You were lucky if you had enough time to take your child with you. We left without looking back.”

Gradually, some families reunited on the Chadian side of the border. But one week after the attacks, some parents are still looking for their children. Families affirm that many old people who weren’t able to move remain in Darfur.

Most of the refugees couldn’t bring anything during their escape. Once in Chad, they gathered in different sites along the border. Because they are scattered over more than 30 kilometers, it is difficult to estimate their number: around 10,000, maybe more. They set up camp under the trees, in the wadis (seasonal rivers), or behind branches. Some of them receive assistance from the local population and the organizations present on the ground—among them, MSF—but the majority of the refugees survive in very precarious conditions. Their situation is unfortunately not going to improve as long as they stay close to the border, since transporting relief supplies in this isolated and unstable area is extremely difficult.

A dangerous return in Darfur

Without a real choice, some people are returning to their villages in Sudan in order to find food, often risking their lives because of the militias still present in their village. Generally, women return; men claim they would be killed if they returned. The women enter their villages during the night in order to avoid armed groups, but the trip is very risky.

“Militias whipped us,” say Hawa and Fatima who recently went back to Gosmino in Darfur. “If you only take a small millet bag then you can go through, but if you take a big bag or something else, then they take it. Some women suffered a lot.” 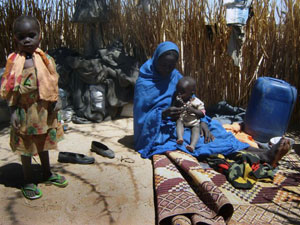 Refugees from Darfur make their home on a patch of land in Figuera.

During the last week of February, the MSF team working in the heath center of Birak treated a man who was shot during his attempt to get food in Seleah. “Normally women go there because it’s less dangerous,” explains the man’s uncle. “However, he had no choice. He didn’t have anything left to eat, and his wife is sick.”

Despite these very precarious conditions, the refugees’ health status remains stable. Nevertheless, it could deteriorate quickly if no assistance is given.

“As for now, we just suffer from the cold and our stomachs hurt a bit, nothing serious,” says Abdallah, a man who came from the Jebel Moon with his 13 children. They have survived up to now with the help of the local population. “But in a couple of days there could be a real problem,” he says.

Caught in this buffer zone, the refugees’ situation seems to be deadlocked. Many of them believe that being transferred to a refugee camp in a more secure area is the solution.

“We cannot return to Sudan because of insecurity,” says one refugee. “We cannot stay here because we don’t have any food and water. If some organization brings us to a camp, we will go.” However, not all of them share the same opinion, particularly some sheikhs (community leaders) who prefer to remain close to the border in order to go back to Sudan as soon as the situation will permit.

For many of them who are tired of this endless war, to go back home is, for the moment, out of the question. For the vast majority of the refugees who recently arrived in Chad, unfortunately, this is not the first attack they have had to endure. Almost all of them claim to have been displaced in 2003 or 2004 following militia attacks.

“Darfur is too bitter, I don’t want to go back,” declares Fatima, the grandmother who arrived in Birak a couple of days ago. “Previously, I was living in my village, but in 2004, militias made us go to a camp. And now, they made us come here. I don’t want to leave one more time.”