MSF has integrated Chagas screening and treatment into the primary healthcare services offered by its mobile clinics in Colombia's Arauca region. 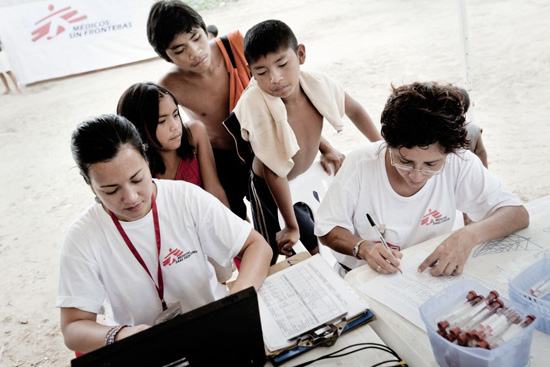 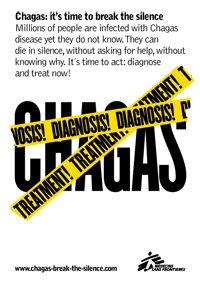 Chagas: It's Time to Break the Silence

Angela lives in Genareros, an indigenous community in Colombia’s Arauca region. A month ago, Yosney and Maryeli, two of Angela’s seven children, completed treatment for Chagas, a disease transmitted by an insect common in rural areas such as Genareros, where people live in houses made of clay and straw. But before Angela could celebrate the end of their treatment, she found out that two more of her children also had the disease.

Chagas is endemic in most Latin American countries. In Colombia, Arauca is one of the most affected regions. The disease is caused by the Trypanosoma cruzi parasite and transmitted mainly by the “kissing bug,” a blood-sucking insect known in Colombia as “pito.” People with the disease may live for years without showing any symptoms. If it goes untreated, however, Chagas can lead to serious health problems−mainly heart and intestinal complications−and even death.

At the end of 2009, Doctors Without Borders/Médecins Sans Frontières (MSF) integrated Chagas screening and treatment into the primary healthcare services already offered by its mobile clinics in Arauca, a conflict-affected region bordering Venezuela. This is the first time MSF has carried out Chagas treatment in a conflict context. “It is a real challenge, because the treatment requires constant follow up for a period of two months, and there is always the concern that we will be unable to reach a community due to security constraints or because an armed group has stopped road movements in the region,” said Patrick Swartenbroekx, MSF field coordinator in Arauca.

The first community to undergo screening was Genareros, where Angela lives with her seven children. Eleven of the 97 blood samples taken from children between 9 months and 18 years old were confirmed positive. “We were surprised to find such a high rate in Genareros,” said Dr. Rafael Herazo, medical focal point for MSF’s project in Arauca. “Fortunately, we didn’t find the same rate when we extended the screening to other communities.”

Thus far, the MSF team in Arauca has collected 1,617 blood samples in 10 different communities and completed laboratory tests for 514 samples. One out of every 28 samples came back positive for Chagas. Confirmed patients are given a medical check-up before they start the two-month treatment. This is important to determine whether or not the patients have already developed the disease. “If the person has developed a serious cardiac complication, for example, there is little we can do to treat the disease,” said Dr. Herazo.

During the treatment period, MSF visited Genareros once a week. Many patients experience side effects from the treatment, meaning that it is crucial to provide follow-up care and to encourage patients to adhere to the regimen. According to Dr. Herazo, “People say, ‘my child was doing fine, then you gave them these drugs that are triggering these skin rashes, this pain in his legs.’ So the health promoters visit patients and their families and stress yet again that Chagas is a deadly and silent disease. They insist that it is important to continue the treatment and that the side effects will go away. If they stop treatment, the child may have serious heart problems later in life. They may be unable to work in the fields, to walk. They will get tired all the time and some may even die.”

Even After Treatment, Challenges Remain

In April 2010, all of the initial 11 children diagnosed with Chagas in Genareros completed their treatment successfully. In one year, Yosney and Maryeli, Angela’s children, will have to do another test to confirm that they are free of the disease. Because they continue living in the same ‘pito-friendly’ houses common in Arauca’s indigenous communities, re-infection is a concern. To reduce this risk and to reduce the overall transmission of Chagas, MSF is lobbying health authorities in Arauca to spray insecticide regularly into the places where the bugs live (while the families are a safe distance away). “All 60 days of treatment, all this awareness raising, the side effects and the community visits will have been worthless if the houses still host the pitos and people get re-infected,” said Dr. Herazo. “We are putting pressure on health institutions to strengthen vector control and at the same time showing that treatment is possible.”