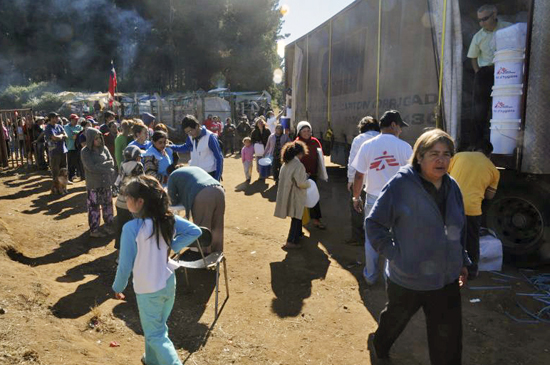 The numerous tremors that followed the February 27 earthquake in Chile have added new levels of stress to an already shaken population. Médecins Sans Frontières (MSF) has therefore made mental health care a priority in its response to the disaster. Simultaneously, as the nights grow colder and the chance of rainfall increases, MSF is speeding up its distribution of plastic sheeting and blankets for people whose homes were damaged and who are now often camping outdoors.

The MSF psychological team is providing direct counseling and psychosocial workshops for various groups, and debriefings for medical staff. It is also lending support to local authorities by training volunteers who will be deployed to provide mental health care in the affected areas.

It’s now been 15 days since the earthquake, but the tremors continue. Several have been powerful and have deeply impacted a population that seems relive the first quake every time a new tremor hits. María Eugenia Mesa works in the Hualañé Hospital, which was badly damaged and now has only one functioning wing, meaning many patients who require hospitalization must be referred to health centers in neighboring towns. She says that more people are arriving at Hualañé suffering from panic attacks than physical wounds. “I am also in a state of panic due to the tremors,” she adds. “At night, if there is a tremor a little stronger than average, I immediately start running outside and continue sleeping outdoors.” The emotional impact of this ongoing situation on María Eugenia and her colleagues is clearly visible, which is why she participated in an MSF group workshop for staff members at Hualañé designed to help attendants express their anguish.

“The medical staff is particularly affected by this catastrophe, as health personnel has to manage both its own emotional distress and that of its patients,” explains Lina María Peñaranda, an MSF psychologist. “In the group activities that we organized, the participants were able to realize that they were not the only ones fostering these feelings, and in this way they could validate their own emotions. They can learn to regard what they lived through as an opportunity and stop seeing themselves as victims.”

A similar dynamic exists in many sectors of the population. MSF conducted psychosocial activities at a nursing home where a building had collapsed and a resident had been killed. Psychological interventions were also carried out in the camps along the coast with children, women and fishermen who reported that they were having trouble eating and sleeping and were afraid to go back into their own houses.

Another concern, especially for teachers, is how to deal with the earthquake’s psychological impact on children once the school year begins, as it will in the coming weeks. Alejandro Cabello, a religion teacher that visited the coastal town of Iloca, says, “The children are very upset. Many are living in tents in the higher hill area because their homes have been devastated. We the teachers ask ourselves how we are going to manage the students in class. On the other hand, we have a strong desire to start the school term as soon as possible.” In a situation like this, says Peñaranda, the MSF psychologist, teachers must let the children express their fears. MSF will hold a workshop for teachers in Licantén that should give them tools to recognize and address various types of behavior they can expect from the children.

Prolonged psychological stress can have serious physical implications as well. “The stress that tremors have generated in the population has also affected the physical health of patients, especially in people who suffer from conditions like epilepsy, diabetes or hypertension,” explains Dr. Franking Frías, a member of the MSF medical team in Chile. “In these kinds of events, this type of patient tends to decompensate. An added problem is that many of them have also lost their medicines.” Likewise, an MSF team providing medical consultations in camps in the coastal area of Concepción found many people exhibiting symptoms that are commonly linked to anxiety.

Though many hospitals in the affected areas were damaged, most have good response capacity and are adequately staffed. In these places, MSF medical workers are attending to some specific medical care needs, performing at-home consultations with patients who don’t want to leave their houses to visit health centers, and donating certain medical supplies to avoid any potential shortages within the health system.

Additionally, after speaking with local authorities and working with local populations to identify needs, MSF is conducting targeted distributions of hygiene kits, plastic sheeting and blankets in areas previously assessed by its staff. A man named Eugenio, who received an MSF kit, lives with his wife, his father and three small children—a nine-year-old, a three-year-old, and a one-year-old—in a house beside the road on the outskirts of Licantén. Even though his home is still standing, many rooms show cracks. The stability of the structure hasn’t yet been checked by engineering experts, so Eugenio and his family sleep in a small tent outside their house. “We get very nervous with each new tremor. The little ones keep crying,” he says.

Volunteers from the same devastated towns are helping distribute donated supplies to people who have been impacted. Most of these volunteers have been materially or psychologically affected as well; staying active can help them in the road to recovery. “It is always recommended to people in these contexts to occupy themselves with an activity or help others, so that they don’t have that much free time on their hands to get upset or think that an earthquake can happen again,” explains Peñaranda.

One can see the solidarity and collaborative spirit of the Chilean population throughout the affected areas. Along the road from Santiago to Talca, many trucks and private cars draped with Chilean flags travel south carrying supplies and collected products. Volunteer doctors, nurses and psychologists are joined by college students and the inhabitants of the affected towns as they provide all kinds of help. “All the country is committed to reconstruction,” says Carlos Haro, the general coordinator of MSF’s intervention in Chile. “The population will go ahead and push forward.”