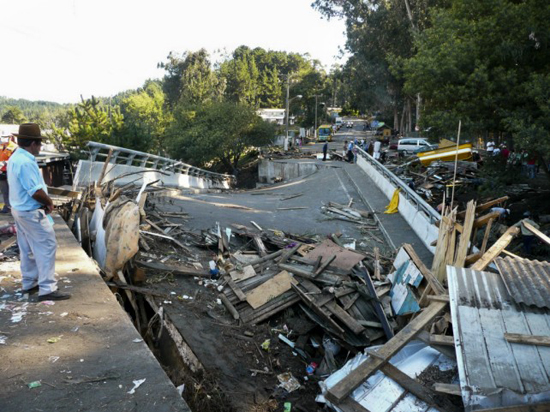 Ten days after an 8.8-magnitude earthquake struck central Chile, the Doctors Without Borders/Médecins San Frontières (MSF) teams that have travelled through the affected areas are focusing their interventions on the most urgent needs: supporting health structures that are caring for large numbers of patients, re-establishing primary health care services, distributing basic necessities, and offering mental health assistance to the affected population.

MSF teams have distributed medical supplies to hospitals in the heavily impacted regions of Maule and Bío Bío. They have also carried out several mobile clinics, particularly in the coastal areas of Maule, which was hit by huge waves caused by the earthquake, and in the inland region of Curepto. Additionally, a team of two MSF doctors are providing medical assistance and supplies to the island of Santa María, which lacked any medical personnel to look after its local population.

MSF has commissioned the production of 3,000 sanitary kits for distribution and is awaiting the arrival of a plane from Panama carrying another 2,000 sanitary kits (which will benefit 25,000 people) along with 2,000 plastic sheets that can be used for temporary shelters. Two medical kits designed specifically for disasters, containing medicines and medical supplies, are also expected to arrive tomorrow from Colombia.

This past weekend, a team of psychologists arrived in Chile to assist people affected by the earthquake, many of whom are suffering from post-traumatic stress disorder, according to our staff. Ongoing tremors in the days following the earthquake have generated widespread panic in the population and made it necessary to pay especially close attention to the psychological impact the disaster had on people in the affected areas.

Since its arrival in Chile, MSF staff has been in constant touch with Chilean authorities and has been sharing with the Minister of Health relevant information, gathered during the exploratory phase, about the state of the country’s health structures. MSF teams based in the cities of Talca and Concepción are coordinating the distribution of aid material and providing medical care and mental health support in the surrounding areas.

MSF teams on the ground have been struck by the solidarity of the Chilean population. Many Chilean doctors and psychologists are doing volunteer work while others have been collecting food and clothes to distribute to their affected countrymen.

At present, the MSF team in Chile consists of 18 staff members, including doctors, psychologists, nurses and logisticians from Argentina, Bolivia, Panamá, México, and Spain, as well as Chile itself.