MSF is battling a cholera epidemic along the border between Sierra Leone and Guinea. 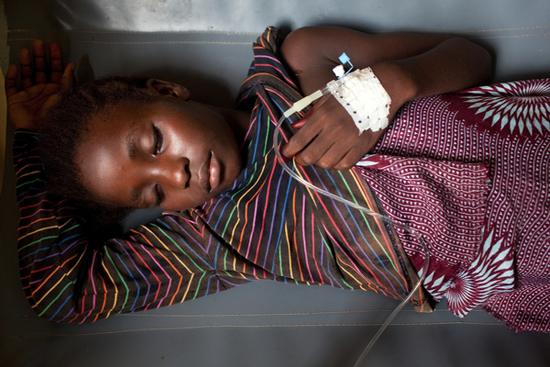 The onset of the rainy season in West Africa has caused an increase in cholera cases on both sides of the border between Sierra Leone and Guinea. More than 13,000 people have been admitted to hospitals in the capital cities of Freetown and Conakry since February, when the disease was declared an epidemic. Doctors Without Borders/Médecins Sans Frontières (MSF) currently has more than 800 beds available to treat cholera patients and is opening additional cholera treatment centers and rehydration points in collaboration with local authorities.

Cholera, which spreads through contaminated water and flourishes in unsanitary conditions, causes days of diarrhea, vomiting, and stomach cramps, and leaves patients visibly emaciated after. It is a punishing affliction. "I want to die," whispers a patient in MSF’s treatment center in the Mabella slum in Freetown, Sierra Leone. "I'm tired, tired of this disease."

Mabella, where clean drinking water and toilets are scarce, is rife with the disease. Here, MSF health promoters are educating the community on what they can do to avoid catching the disease and advising them on what treatment is available.

Since the start of the epidemic, MSF’s medical teams have treated nearly 4,600 patients in Sierra Leone and Guinea, which share a reservoir near the coast that is a breeding ground for the disease. “This ‘coastal cholera’ has already killed some 250 people," says MSF epidemiologist Michel Van Herp. "The water reservoir allows the Vibrio cholerae bacteria to survive and go on to infect the population."

Once people are infected through contaminated water or food, the disease spreads quickly, accelerated by poor hygiene practices, lack of latrines, and mismanaged wastewater. Cholera can only be halted by improving hygiene conditions.

Since the region’s last major epidemic in 2007, cholera has flared up sporadically in Guinea and Sierra Leone. Despite this, many people have gradually lost their immunity to the disease. This year, people in the region are particularly vulnerable. "The current number of cases in Conakry is almost double that of the same period in 2007," says Charles Gaudry, country representative for MSF in Guinea. "The resurgence of the epidemic shows clearly that it is essential to maintain prevention activities both during and between the outbreaks."

While eliminating cholera altogether may still be impossible in many African countries, targeted vaccinations play a role in the fight against the disease. "The oral vaccine used recently by MSF on the coast of Guinea has, until now, prevented an outbreak of cases in this region,” says Gaudry. However, he warns, “vaccination [alone] is not a panacea. In-depth work on water and sanitation networks is the only way of controlling the disease in the long term.”

According to the World Health Organization, there were 85,000 cholera cases and 2,500 deaths from cholera recorded in Africa in 2011. MSF has extensive experience dealing with the disease, treating more than 130,000 cholera patients worldwide in 2011. Between late-April and mid-May 2012, MSF vaccinated 143,000 people against cholera along the coast of Guinea in collaboration with the Guinean Ministry of Health.