Dadaab Briefing Paper: Back to Square One

"Dadaab: Back to Square One" takes stock of the current humanitarian situation in the world's largest refugee camp. 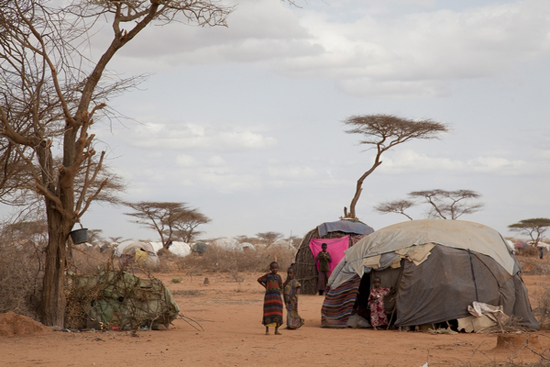 Somali refugees settle at the edge of Dadaab, the world's largest refugee camp.

In the Dadaab camps of northerastern Kenya, which collectively form the largest refugee camp in the world, life is becoming more difficult every day and hundreds of thousands of refugees are facing a humanitarian emergency. Their health is at risk of deteriorating rapidly but humanitarian aid agencies are struggling to provide meaningful assistance on an ongoing basis.

In October 2011, in the wake of the kidnapping of two Doctors Without Borders/Médecins Sans Frontières (MSF) staff and amid a climate of worsening security, MSF halted all "non-lifesaving activities" in the Ifo 2 camp, where the kidnappings took place, and official registration of new arrivals was stopped. Today, for many refugees, services have not been restored. There is an urgent need to ensure that protection and assistance is provided, even though efforts are being made to guarantee that food aid is distributed in the current environment.

The relocation of families to the newly opened camps of Ifo 2 West and Ifo 2 East continues, but work to ensure sufficient services has been slow to restart. Today, a limited number of people remain on the outskirts of the camps in so-called "self-settled areas," where living conditions are still extremely poor. Such conditions have profound consequences for the health of these refugees, as confirmed in a detailed survey conducted by MSF’s epidemiological branch, Epicentre, in September 2011. The health situation in Dadaab is alarming, with recent outbreaks of measles, acute watery diarrhea, and cholera.

Unfortunately, there is little hope of improvement in the short term. While media and political attention has been focused on the situation inside Somalia itself, the striking needs of thousands of people who live in inhumane conditions in Dadaab should not be ignored. The international community is failing to provide those men, women, and children fleeing conflict and drought in Somalia with more than the bare minimum.

MSF continues to run its hospital and four health posts in Dadaab's Dagahaley camp. At the height of the emergency, from October 2011 to January 2012, the 300-bed hospital in Dagahaley was operating beyond its capacity, reaching a peak of more than 350 patients in the first week of January. Today the situation has improved and medical activities have been restored in Ifo 2. However, the number of severely malnourished children requiring hospitalization is still high compared to the same period last year, with nearly 100 children being admitted to the intensive therapeutic feeding center every week.

MSF is constantly adapting to the exceptionally difficult humanitarian and security challenges in the camps. Despite limited international presence in the camp due to security concerns, MSF staff are still providing high quality medical care.

A Year of Emergency Response

MSF staff first witnessed a deterioration in the health and nutritional status of newly arrived refugees at the beginning of 2011. A survey in January 2011 in the self-settled area outside Dagahaley camp known as Bulo Bacte ("the carcass dump") showed malnutrition rates bordering on the emergency threshold. Over the next six months, malnutrition rates in Bulo Bacte doubled, and by June 2011 one in five children under the age of five were acutely malnourished. Older children were also affected, a clear sign of the extremely poor health status of refugees living on the outskirts of the camps.

MSF responded to the emergency by doubling the size of its hospital in Dagahaley to accommodate a 200-bed inpatient therapeutic feeding center. MSF also built a new health and nutrition post in Bulo Bacte itself and provided ready-to-use supplementary food for moderately malnourished children to prevent their condition from further deteriorating.

MSF shared the results of its 2011 surveys with the main organizations working in the camps. As a result, the United Nations Refugee Agency (UNHCR), the World Food Program (WFP), and other aid agencies scaled up their targeted interventions for new arrivals. These included providing food rations to refugees as soon as they reached the reception center and improving supplementary food distribution.

However, there has been a large increase in the number of severely malnourished children admitted to MSF’s hospital in Dagahaley since the end of this past November. Most of them arrive from the new extensions of the Ifo camp where MSF halted its medical activities after the kidnapping. The Kenyan Red Cross is currently expanding its activities in order to cover the massive needs of the population. These efforts are reducing some of the burden in MSF's Dagahaley hospital. However, more than 2,400 severely malnourished children are currently enrolled in the nutritional program, which indicates that one in 12 children in the camp is severely malnourished, which means they are at immediate risk of dying.

In addition to the nutritional crisis, several disease outbreaks affected the camps in 2011. In Dagahaley alone, MSF treated more than 380 cases of measles and vaccinated 113,796 people against the disease. In November 2011, acute watery diarrhea, along with some confirmed cholera cases, posed a new serious health risk in the camps. MSF opened a 50-bed cholera treatment center in Dagahaley hospital to combat the outbreak.

In June 2011, temporary reception centers were set up in each camp to implement medical screening and provide food and essential items to the newly arrived refugees. In September 2011, the capacity for registration in Ifo camp was increased so that refugees could be fully registered when they arrived. The system, though complex, at least provided new arrivals with access to full registration on the same day of arrival. Since the October kidnapping of two MSF staff members, however, there has been no official registration in the camps.

In August 2011, the shelter situation was markedly improved by the opening of the Ifo 2 West and East camps. Cambios, a new camp in Fafi district with space for more than 180,000 people, was planned as well, but as of today basic services in the Ifo 2 West and East extensions are still under construction, and Cambios only hosts 12,000 refugees. Since the beginning of February, only 60,000 refugees in total have been relocated.

Families arriving in Dadaab are currently forced to choose between settling on the camps’ outskirts,  sharing overcrowded accommodations with refugees living in the “old” camps,or living in the new camps that are not fully operational and are equipped with only the most basic services.

The deteriorating security situation in the Dadaab area affects both refugees and humanitarian workers. Today the capacity of humanitarian actors to protect and assist newly arriving refugees is significantly lower than it was in 2011.

Since returning to Dadaab in 2009 to take over health care in the Dagahaley camp, MSF has repeatedly spoken out about the refugees’ desperate living conditions and their need for humanitarian aid, protection, and dignity.

In July 2011, as a result of public awareness and media attention on Dadaab, the dire situation of refugees started to improve. There was a positive response from the international community and aid organizations and assistance to both the people living in the camps and refugees on the outskirts was increased.

Unfortunately, since October 2011 the situation has changed. Humanitarian aid has been scaled down, and all registration of new arrivals has stopped. The deterioration of the security situation in the area threatens to reverse all the positive gains. Dadaab is still an emergency situation.

The refugees living in Dadaab—and others on their way—need the continuous support of the UNHCR, the Kenyan government, and humanitarian organizations to survive. It is the responsibility of these decision makers to find solutions to reverse the current trends in the camps. If conditions in the camps do not improve, refugees risk becoming victims of the system that should be assisting them.

Refugees need immediate protection and care while living in the Dadaab camps. While longer-term solutions should be considered, today’s reality is that hundred of thousands of refugees depend on the aid system and the host government to ensure that their human rights are respected.

Until this happens, the health of the refugees will continue to deteriorate with mortal consequences, and aid organizations will be powerless to do anything but watch.