Overlooked by the international community, the already-dire situation in Kenya's overcrowded Dadaab refugee camps is worsening. 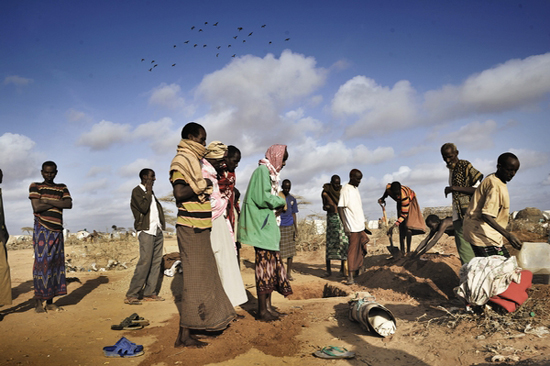 Family members and neighbors prepare a grave in Dagahaley for a girl who died of complications from malnutrition and a weakened immune system. 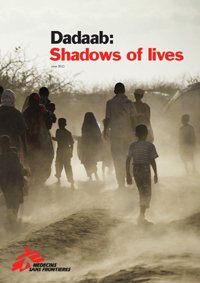 Dadaab 20 Years On: Shadows of Lives

Kenya’s Dadaab holds the shameful title of the largest refugee camp in the world. Its five camps (Dagahaley, Hagadera, Ifo, Kambios, and Ifo 2) are home to 465,611 registered refugees[1] as well as thousands who are not yet registered. Three-quarters are children under 12, women, and the elderly.[2]

Envisaged as a temporary solution to house refugees from Somalia’s civil war, the Dadaab refugee camps are now 20 years old, and have become a permanent home for the majority of those who have sought shelter there.

Forgotten for years by the international community and the media, for a brief moment during the summer of 2011 Dadaab was in the public eye, when images of its exhausted refugees and malnourished children made front page news all over the world. Emergency funding was released, aid agencies scaled up their efforts, and two additional camps were opened.

But the attention was short-lived, and many of last summer’s gains have already been reversed. Since the summer, the conflict in Somalia has spilled over into the camps, and Dadaab is no longer a place of safety.

Following a number of serious security incidents, including the kidnapping of two Doctors Without Borders/Médecins Sans Frontières (MSF) staff, the relief efforts in Dadaab were drastically scaled back in October 2011, and all “non-lifesaving activities” were suspended. This included the registration and medical screening of newly arrived refugees, with the result that those seeking asylum in the past nine months have received no official recognition and little assistance.

Refugees are still arriving from Somalia in reduced numbers, though no official figures are available to confirm this. Most appear to be women and young children. Many are highly vulnerable and have limited coping mechanisms. Although some have received tokens for food rations and essential relief items from the UN’s refugee agency (the UNHCR) and the World Food Program (WFP), they have not been provided with materials to build shelters, and so are dependent on the goodwill of fellow refugees for a place to stay.

Kenya’s Department of Refugee Affairs (DRA) has recently announced a month-long window for registering refugees (running from June 5 to July 4, 2012). While this is a welcome development, it remains a temporary and limited measure, and one for which many refugees have had an excessively long wait.

Relocation of refugees to the new camps of Ifo 2 and Kambios is ongoing, but these camps are not yet fully operational and lack many basic services. For example, because there is no food distribution in Kambios, its 13,413 residents have to make their way to Hagadera to receive food rations.

The problems in the camps are being exacerbated by a lack of funding, which has forced the UNHCR and its partner organizations to continue to prioritize lifesaving activities at the expense of other activities.[3]

With the violence in Somalia intensifying, the security environment in Dadaab is not improving. Continuing clashes in the border areas and bomb attacks and assassinations within the camps are making life for the refugees increasingly difficult.

Insecurity has also left humanitarian organizations struggling to do their work. With the situation changing daily, planning and delivering aid is a major challenge. Compared to a year ago, there are now fewer aid staff—both international and local—on the ground, which has had an effect on the quality of assistance provided. For example, over the past few months, health posts have had to function for weeks at a time without qualified
medical staff.

Most refugees in Dadaab have already suffered violence, hunger, and terrible loss in Somalia. They have made the dangerous journey to Kenya in search of safety, shelter, and assistance, only to discover that the camps no longer offer refuge.