Displaced By Violence, Stalked By Illness

Fighting in DRC's North Kivu province has forced more than 100,000 people to flee their homes and live crowded in camps near Goma. 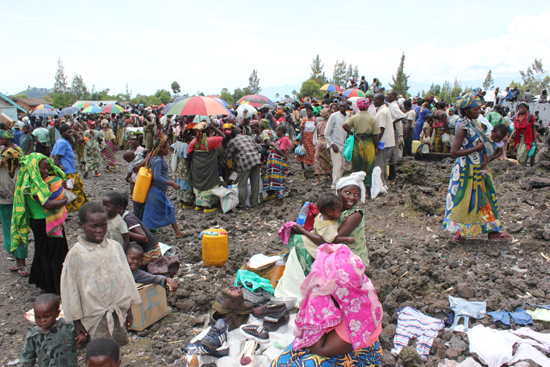 More than 100,000 people are living in extremely precarious conditions in the area around Goma. Since mid-November, clashes between the DRC’s armed forces (FARDC) and M23 rebels have resulted in a massive new wave of displacement. The populations of North Kivu, which are in constant flight along the roads, are very familiar with this situation as violence has been commonplace in the region for nearly 20 years.

A crowd disperses briefly as a vehicle approaches, gathering again after it passes. It’s food distribution day at Mugunga III camp, and what seems like the entire population of the camp has converged at this very spot.

Several people stand apart at the bend of an alley, watching the hustle and bustle at the entry to the camp. “My bloc received its food rations already, but everything was stolen,” says one. Two days earlier, the day after rations were distributed in the area of the camp where Venatie lives, armed men plundered the camp in the middle of the night, she says. “It was 11 p.m. The men forced their way into the shelters and took everything - blankets, food, cooking pots. They took everything they found.”

Charline is the president of Mugunga III camp. She is overwhelmed. Everyone needs her help. She manages the camp and its problems with boundless energy. “The population more than doubled within a few days,” she says. “It’s very complicated to manage but I fight to defend our interests because like everyone else here, I know what it’s like to be displaced and experience violence and suffering.”

As the rebels advanced on Goma, displaced persons who were already in the Kanyaruchinya camp after M23’s July attack on Rutshuru moved to the camps west of Goma, swelling their numbers. Some remained, not knowing where to go. But when the first fighters arrived with a loudspeaker mounted on a truck blaring warnings that they should flee to Mugunga camp, they made up their minds. They fled so quickly that one woman was unable to stop and care for her son after he fell on the road. She could only pick him up and keep going. When she arrived at the Mugunga III camp health center several days later, his upper lip was still swollen and his teeth were still battered. “He fell as we were fleeing,” she recalled. “I barely had time to scoop him up and keep running.”

Roaming from one camp to another, more than 100,000 people live in extremely precarious conditions. “When the rebels arrived, I fled with the other displaced persons,” explains Béatrice, a 22-year old woman who is alone here with a young child. “We left so quickly that I couldn’t take anything with me. I have nothing here, not even shelter.”

Assistance is being organized in the camps, but it remains inadequate. Food distributions do not cover all needs. Few people therefore prefer to risk returning with no certainty of getting back home.  They often end up being housed with host families—themselves victims of violence—where living conditions are scarcely better.

MSF is working in five camps around Goma, providing basic medical care to displaced population and monitoring and treating malnutrition and cholera. Measles vaccinations have been administered in some of the camps. The teams also offer treatment for victims of sexual violence and staff mobile clinics to provide care to persons returning home.

In addition to medical activities, MSF has distributed water and basic supplies and is building and restoring health facilities. However, the needs are still great, particularly for food, tarps and utensils for daily living.