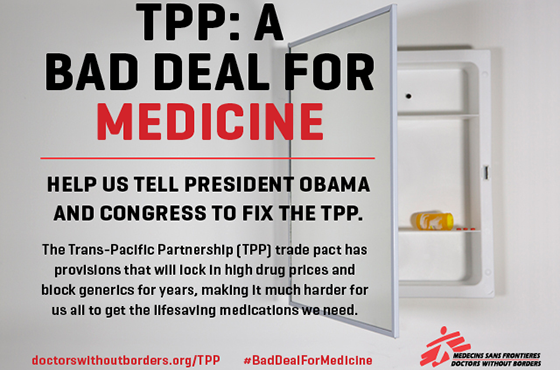 NEW YORK/WASHINGTON, DC—As negotiators reportedly meet in the Washington, DC, area to finalize the Trans-Pacific Partnership (TPP) trade deal, and as Congress considers legislation on the matter, the international medical humanitarian organization Doctors Without Borders/Médecins Sans Frontières (MSF) this week launched “A Bad Deal for Medicine," a web and print advertising campaign highlighting how the secret trade agreement will lock in high prices and block millions from accessing the medicines they need.

If approved in its current form, the TPP, which is being negotiated between the US and 11 other Pacific Rim countries, would lower the standard for which medicines deserve a patent and extend patent monopolies for modifications to existing drugs. It would also delay the availability of affordable versions of biologics, a new class of drugs that includes everything from cancer medicines to vaccines.

"The TPP is an extremely damaging trade deal for access to medicines," said Judit Rius Sanjuan, manager of the MSF Access Campaign in the US. "Whether you are one of our patients in a developing country or an American who depends on affordable medicines, the TPP is what will stand between you and your ability to access affordable generic medicines."

A Bad Deal for Medicine: Join the Campaign

The ad campaign will run through May in Roll Call, the Economist and the Nation, and billboard advertisements will appear in metro stations and trains, and on the sides of buses throughout the DC area. The ads will drive the public to a campaign page about the TPP, and encourage them to contact their representatives and promote the issue on social media.

"The TPP is a major agreement touching on hundreds of topics, but we can’t allow the potentially devastating health consequences of the trade deal to remain a peripheral issue," said Rius. "Access to affordable medicines affects people in all TPP negotiating countries. It’s time that the public and the US government really pay attention to the health ramifications of this trade deal."

MSF has repeatedly expressed its concerns to members of Congress, the US Trade Representative, and President Obama. But damaging provisions for health remain in the text.

One of the most concerning provisions in the TPP has to do with biologics; if pharmaceutical companies have their way in the TPP, generic producers of biologics would be blocked from entering the market for at least 12 years, and patients, governments and treatment providers like MSF would be forced to endure astronomical prices during that time.

There is simply no evidence that extended periods of market exclusivity are necessary to promote medical innovation, Rius said.

"We are calling on the public to let their representatives in Congress and President Obama know that the current TPP is unacceptable for health," said Rius. "Tell the U.S. government to drop provisions that would be harmful to affordable access to medicines. The well-being of people in need of medicines should be the driving concern as these negotiations come to a close."