MSF and the DRC's Ministry of Health is vaccinating more than a million children to stem a measles outbreak in Katanga Province. 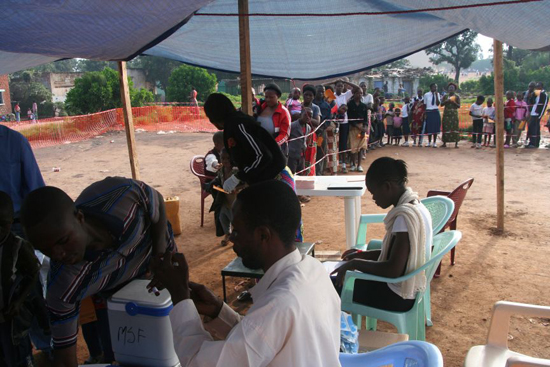 In late January, Doctors Without Borders/Médecins Sans Frontières (MSF) and the Ministry of Health of the Democratic Republic of Congo launched a measles vaccination campaign in Katanga Province. The plan was to vaccinate approximately 1.2 million children in order to halt the spread of an ongoing epidemic.

"The epidemic began to appear in scattered fashion," says Dr. Northan Hurtado, an MSF primary care physician. "At the start, in mid-October, rural areas were most affected. Then the cases started increasing in urban areas." By mid-January, as the disease spread, 3,885 children in Likasi district contracted measles and 31 died. The city of Lubumbashi, the provincial capital, was not hit as hard, but 791 children still fell ill.

The Logistics of Vaccination

Measles can be fatal among children, and vaccination remains the only form of prevention. It was necessary to start vaccinating quickly to halt the epidemic, but organizing a major vaccination campaign is no simple task. The strategy was developed in consultation with national authorities and partners such as the World Health Organization—although approaches differed.

The health authorities wanted to organize a large number of five-person teams, like those that would be assembled for a monitoring or catch-up campaign. MSF, however, recommended a smaller number of teams made up of 12 people each. "Our strategy is based on a rigorous approach to quality," Dr. Hurtado explains. "By deploying fewer teams, we can better supervise the quality of the teams' work—administering the vaccine, for example—and keep better control of the cold chain, which is critical to preserving the vaccine." Eventually, an agreement was reached, and when supply delivery problems were resolved, the campaign got underway in Likasi.

Fifty-four teams were assembled, and between January 25 and January 31, the Congolese Ministry of Health and MSF vaccinated 190,733 children. Under the guidance of a nurse/team leader, three nurses prepared the vaccine and performed the inoculations. A registrar completed the vaccination record, a nurse's aide administered Vitamin A (a critical supplement for preventing possible complications from measles), and a recorder noted the number of children vaccinated. Drivers were also needed for the vehicles transporting staff and supplies, and security guards were necessary, too.

After finishing their work in Likasi, the teams set out for Lubumbashi. On February 4, teams went into several neighborhoods to begin vaccinating nearly 920,000 children between 6 months and 15 years old.

The Importance of the Cold Chain

In logistical terms, maintaining the cold chain is essential in order for the vaccinations to be effective. The vaccine is supplied freeze-dried and transported in coolers along with the solvent needed to prepare it. The teams traveled in vehicles carrying a huge cooler that held 2,500 doses of vaccine and the equivalent amount of solvent. When they arrived at the pre-arranged sites, they set up supplies, tables, chairs, and vaccine carriers—smaller coolers that hold the vaccine that has been reconstituted with the solvent.

A line was set up to avoid crowding. Mothers were already there with their children; they had heard announcements about the vaccination campaign on the radio and or through megaphones in their neighborhoods and heeded the instructions to bring their children to the designated location. Teams vaccinated an average of 1,200 to 1,300 children per day in Lubumbashi, where the effort should last about 10 days, time during which a two-person team composed of a logistician and a nurse will oversee the operations, ready to step in in the event of a problem.

These methods have been tried and tested over the course of past campaigns MSF has run in many countries. Before vaccinations even begin, medical personnel are trained on how the campaign will be conducted. The last phase is a vaccination coverage survey, which identifies any remaining at-risk areas where people have not been vaccinated. If such pockets are identified, a team must administer more vaccinations in those areas to reach the goal of vaccinating at least 90 percent of children and stemming the spread of the virus. This goal was achieved for Likasi district, where the vaccination coverage rate topped 99 percent.