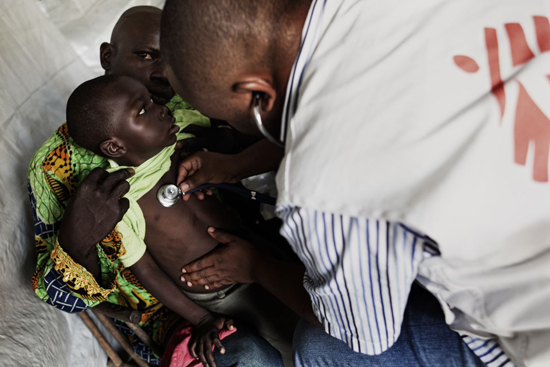 Day In, Day Out: Delivering Basic Health Care in DRC

Decades of conflict and a lack of government investment have made it hard for people in the Democratic Republic of Congo (DRC) to access basic health care. Epidemics have spread unchecked and treatment of deadly diseases has been neglected.

Eastern DRC is still a volatile place, marked by shifting alliances between armed groups, ongoing military operations, instability, insecurity, banditry, and violence. The frequency of attacks against civilians and aid organizations are rising, making both the population and humanitarian aid workers increasingly vulnerable.

Rape, murder, kidnapping, and random acts of violence are daily occurrences for millions of people. The instability continues to push people from their homes and at times limits MSF’s ability to provide free and lifesaving healthcare.

Little investment put into the healthcare system has resulted in a lack of infrastructure and properly trained medical staff throughout the country. While medical needs are enormous, people struggle to access the most basic level of healthcare services.

“For patients to get access to health care, they often have to walk for many hours,” explained MSF Head of Mission Christine Buesser. “Imagine you are a pregnant  woman, and you may even have to carry another child on your back. These distances are very difficult to overcome. This is a daily challenge—just to get to a heath facility.”

Decades of neglect of the health system in DRC have resulted in a rise in infant and maternal mortality rates across the country. Life expectancy here is among the lowest in the world.

Logistical constraints due to the country’s enormous size, a lack of investment in healthcare facilities, and the poor training of health workers all contribute to weak national disease-prevention measures.

The Expanded Program on Immunization, an initiative to provide standardized child vaccination schedules by the World Health Organization, to be carried out by individual countries, is dysfunctional in DRC. There is also a lack of sustained vaccination strategies in the country, which creates a permanent health emergency in the country. Preventable epidemics, including cholera, measles, and malaria, take a heavy toll on the Congolese population.

Malaria is the leading cause of illness and death in DRC, and MSF medical teams continue to treat large numbers of patients in 2011. Malaria treatment represents one-third of consultations at MSF clinics.

Since late 2010, there has been a measles epidemic in DRC. More than 14 million children have been vaccinated—more than three million by MSF. However, these urgent efforts have not halted the epidemic, and four out of 11 provinces have not yet been covered by the immunization follow-up campaign.

MSF has been responding to cholera outbreaks along the Congo River and in the capital, Kinshasa, since April 2011, treating patients and building treatment facilities. The threat of a cholera outbreak, combined with the onset of the rainy season in August, is especially worrying in densely populated urban centers without proper sanitation systems.

Commitment Is Needed to Fight AIDS

In DRC, only 12 percent of HIV-positive patients are receiving antiretroviral (ARV) drugs, and 95 percent of women living with AIDS don’t have access to treatment that can help prevent the transmission of the disease to their unborn children.

The country is currently facing a serious challenge in funding the fight against HIV/AIDS. In 2011, the World Bank stopped funding its HIV/AIDS programs in DRC; and several other donors are working with extremely limited funds. In addition, the Global Fund to Fight AIDS, Tuberculosis and Malaria, the largest financing mechanism in the fight against HIV/AIDS, is facing a major funding shortfall from donor countries.

The current donor retreat could leave 10,000 patients in DRC without treatment and prevent more people from accessing treatment, which would threaten to undermine all the progress made since the introduction of ARVs in the country. MSF is continuing its lobbying efforts for donors to maintain their support.

Half of all cases of the neglected and fatal disease Human African trypanosomiasis—also called sleeping sickness—occur in DRC, particularly in the Haut-Uélé and Bas-Uélé districts of Orientale Province in the northeast. Prevalence can reach five percent in some areas, well beyond the threshold of 0.3 percent needed to consider it a public health problem.

The disease is transmitted to humans through the bite of infected tsetse flies and is fatal if left untreated. Displacement and instability have contributed to its spread, and the lack of roads makes accessing patients difficult.

Since 2007, MSF has treated an average of 1,000 patients per year. For the next three years, teams are planning further exploratory missions to reach more patients and diminish the prevalence of sleeping sickness in the region.