Epidemics, rape, and constant movement to escape violence in North Kivu province, Democratic Republic of Congo, have taken their toll on the population. "These people are exhausted, increasingly weak, and consequently, increasingly ill," says an MSF coordinator in Masisi. 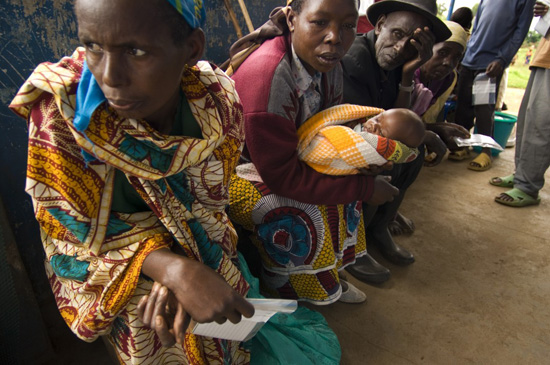 More than four months after the peace agreements were signed at the end of the Goma conference, Josephine and her seven children are still struggling daily for survival in the Masisi refugee camp.

Last October, when the sound of gunfire first broke out in her village near Kitchanga, Joséphine fled, taking her children with her. After walking for two days, the 50-year-old woman and her children were among the first to arrive in Masisi, where a camp for internally displaced persons (IDPs) was swelling as the days passed.

"Since October," Joséphine explained, "we have been forced to live in these difficult conditions. We were given tents, and latrines and showers were built. But our life here is still very hard. Food isn't distributed regularly."

To make up for this, Joséphine and the other members of the 2,300 displaced households in Masisi cultivate small plots of land that are provided to them. She grows beans and manioc, and three times a week, Joséphine and many others like her walk three hours to till their little piece of land. "Sometimes," she says, "security is good. Sometimes it isn't."

“Some women are afraid of coming for treatment, because rape is still taboo in the community. Others don't know that medical care is needed and that it's available for free at the Masisi hospital. Still others live too far away.”

For many women who risk going to the fields, insecurity is another word for rape. "Each month, we receive on average ten women who are victims of sexual violence," explains Francine Bayanga Bora, the nurse handling cases of sexual violence at the Masisi hospital, supported by Doctors Without Borders/Médecins Sans Frontières (MSF). "This figure does not at all reflect the actual situation. Some women are afraid of coming for treatment, because rape is still taboo in the community. Others don't know that medical care is needed and that it's available for free at the Masisi hospital. Still others live too far away, in places that are too remote and closed off, with no medical facilities."

For these reasons, last May MSF launched a vast informational campaign for women in Masisi and four other areas. Women villagers are brought together, and MSF's speaker explains the importance of medical treatment within 72 hours of a rape, during which it is still possible to give HIV/AIDS prophylaxis and emergency contraception.

She also tells them about the Masisi hospital, where treatment is free. Even after 72 hours, women who are victims of sexual violence need to be treated for sexually transmitted infections. The speaker reassures them that treatment is provided in full confidentiality, in the women's health department of the Masisi hospital. Moreover, mother-counsellors are identified and trained. They are the ones who, on a daily basis, continue to give this information to the women in the region. 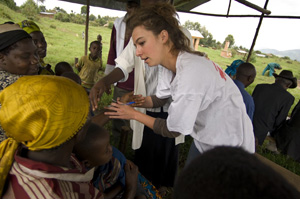 An MSF nurse speaks with patients waiting to receive medical care at a mobile clinic in North Kivu.

For the inhabitants of North Kivu, insecurity is also illustrated by daily clashes between armed groups, stray bullets, and ransacked villages. Over three months ago, thousands of people fleeing combat and forced conscription into armed groups set up a camp for displaced persons a few hundred meters from the village of Bukombo, northeast of Masisi. They received no assistance. Faced with almost unbearable living conditions, some of them settled in the surrounding villages with local families. All in all, more than 1,500 households were added to the local population.

"As the months go by, their survival mechanisms are reaching the limit. These people are exhausted, increasingly weak, and consequently, increasingly ill."

The repeated departures and weakness fling the door wide open for epidemics, such as measles, which is once again making an appearance in the Masisi region. MSF is responding by treating children who have contracted the disease and holding vaccination campaigns.  "We vaccinated more than 30,000 children in March," says Halford. In response to a recent outbreak southeast of Masisi, MSF plans to vaccinate 45,000 children.

In Lushebere, several kilometers from Masisi, the displaced persons camp is in front of the market, which is organized twice a week. The food, the shouts of vendors, the clothing stands give the impression that daily life is going back to normal in this area, which is no longer in the front line of combat.

But in Masisi's surgical department, the MSF medical team continues to operate on patients with bullet wounds, such as one man who was hit in the lung as he was coming back from the Lushebere market.

Displaced to the Masisi camp for eight months now, Joséphine and others live in tents. Going home remains a dream: "It would be much too dangerous. Battles continue to rage there. But we're really not proud of having to stay here."

MSF has been helping the Masisi hospital since August 2007. The hospital has 180 beds, divided between pediatrics, labor rooms, surgery, measles beds, a center for cholera treatment, and a therapeutic nutrition center, managed by a partner NGO. Every month, 400 patients are hospitalized and 4,500 consultations are performed at the hospital and at the Masisi health center, also supported by MSF.

A program to support and build awareness of medical treatment for victims of sexual violence was started in May at Masisi and in the areas of Lushebere, Kitsule, Buguri, Bukombo, and M'bitsi. A host village for women with at-risk pregnancies is being constructed. A vaccination campaign for 45,000 children in the area around the village of Langira, in the southeast, is currently being launched.