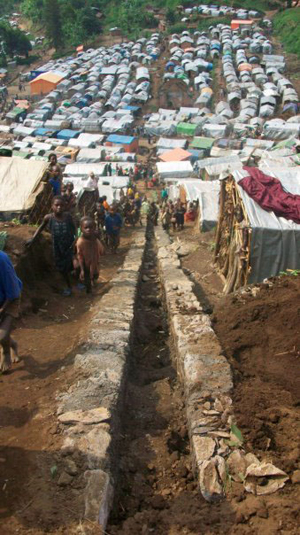 Children stand at the bottom of a hill in Kilimani camp in Masisi, where 10 people, mostly children, died after two landslides

Two children had been killed in another landslide just days earlier.

In addition to the loss of life, the mudslide destroyed dozens of huts sheltering some of the 4,500 camp residents. Affected families have lost most of their belongings.

Doctors Without Borders/Médecins Sans Frontières (MSF) responded immediately, travelling to the camp and transferring five injured people in need of urgent treatment to the MSF-run Masisi hospital. An MSF psychologist is meeting with affected families. as well, providing psychological support.

Kilimani camp, where the landslide hit, is located in the center of Masisi town. The initial camp population of 2,000 has now nearly tripled following intensified fighting and insecurity in the region over the past two years. Most of the displaced population is living in small huts on muddy hillsides.

MSF is also working in a health center in Masisi and running mobile clinics in the region. Over the past few months, MSF has constructed urgently needed water points in Kilimani camp. However, current heavy rains could provoke additional deadly landslides in the camp. Hundreds of people, already displaced by war in North Kivu, are now living in fear of new landslides.

MSF is currently the only humanitarian organization still continually present in Masisi, a region at the heart of the war in Eastern DRC. Close to 90 Congolese and 11 international staff are working for MSF in Masisi.