In DRC, MSF Adapts Response to Ebola to Respect Dignity 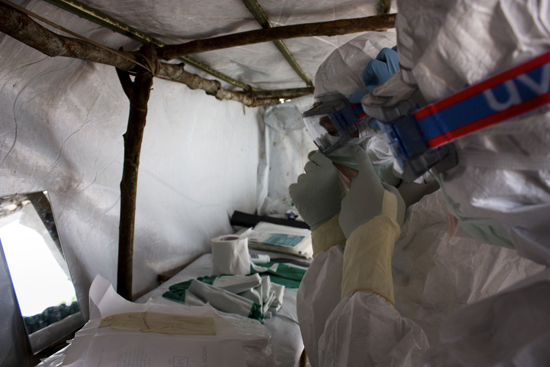 MSF staff put on their protective gear inside an isolation unit for patients with suspected Ebola hemorrhagic fever.

Luis Encinas recently returned from Kasai Occidental province in central Democratic Republic of Congo (DRC), where he led the Doctors Without Borders/Médecins Sans Frontières (MSF) team fighting an epidemic of Ebola hemorrhagic fever. A nurse by profession and the operations coordinator for this MSF project, Encinas spoke about the situation on the ground and how MSF has changed its way of responding to Ebola.

Is the Ebola epidemic spreading?

It’s difficult to say, at present. Our team on the ground is still carrying out research to gain a better understanding of the epidemic. To date, a total of 42 people have developed symptoms resembling those of Ebola haemorrhagic fever, and 13 of them have died.

Where is the epicenter of the epidemic?

“Over the years, as we gain more experience of hemorrhagic fever epidemics, we’re adapting our practices to make them more humane, and to respect the dignity of those affected.”

The epicenter is probably in a village called Kaluamba, 65 km (40 miles) south of Mweka, the main town in the area. There are also places where patients suspected of suffering from Ebola have been observed—in the villages of Kabau and Kalombayi, and in Mweka.

In September and October 2007, MSF responded to an Ebola outbreak in the same area. At that time, 46 patients were admitted to the isolation ward and 186 died in the space of a few months.

Given that there is no cure for Ebola, what role can the MSF team play?

Our work is structured around four main activities. First of all, we must isolate the patients, so they don’t infect anyone else, but also so they can receive palliative medical care.

Meanwhile, others in the team go into communities to look for sufferers, and monitors people who have been in contact with infected patients.

Then, there’s all the social mobilization work—in other words, raising people’s awareness of the disease, its symptoms, the modes of transmission and prevention methods.

Finally, we must make sure that healthcare is free throughout the epidemic. Why is that so important? Much of the population can’t afford to pay for healthcare. It’s a very unstable region; poverty is everywhere. Free care removes the financial barrier that prevents people from getting treatment. This makes it easier for us to identify people infected with Ebola, and to diagnose and treat other fatal diseases. I’m thinking particularly of malaria, respiratory infections, and even viral or bacterial diarrhea. For example, a case of shigellosis—diarrheic disease—has been confirmed in recent weeks. 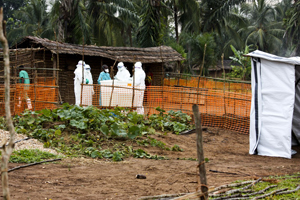 MSF staff outside of an isolation unit in Kaluamba, Western Kasai province.

We mainly base our diagnosis on clinical signs and on what we call the patient’s history: ‘Has he or she been in contact with other suspected sufferers?’ We systematically give patients a treatment against malaria and shigellosis, in case they’ve been infected with those diseases. This is because definitive confirmation of Ebola can only come from a laboratory.

Around 20 blood and stool samples from patients have been sent to laboratories in the Congolese capital, Kinshasa, as well as in Gabon and South Africa. Unfortunately, we’ve only had ten results back. Three patients tested positive and all three have survived the disease. The length of time it takes to obtain the lab results is a problem.

Supernatural causes are often attributed to anything for which there is no known explanation. Things are explained using beliefs about good and evil. Some people take advantage of this superstitious mindset, claiming that they are healers. And some sufferers are afraid to go to health centers, which they perceive as places where people go to die.

So, the awareness-raising work is crucial …

Yes it is. The awareness-raising team, coordinated by a sociologist, sends out messages through 35 outreach contacts within the local communities. They also organize lots of meetings with local leaders and circulate information via posters or on the local radio. The aim is to explain that Ebola is a problem that affects everyone—whether black or white, rich or poor, man or woman, from one religion or another—and the disease must be fought by everyone. The awareness-raising team also plays an important role at funerals, as funerals must be carried out in accordance with very strict protection rules, which often go against local customs.

Does the local population easily accept these rules imposed by MSF? 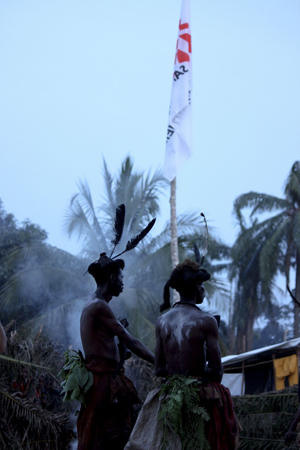 People wait outside of an MSF isolation unit for Ebola in Kaluamba, Western Kasai province.

That’s the whole point of the awareness-raising work—to explain the importance of the protection rules. Certain funerary rites are very deeply rooted, for example: the head of the deceased is shaved, his nails are cut, and he is washed …

We go to the funeral in our everyday clothes and explain to the family why we are there and what we do. One member of the family will perform, with us, all aspects of the ritual that involve physical contact, and will ask the rest of the entourage not to touch the body. Along with that person, we put on protective gear, then place the body of the deceased in a body bag, taking care to leave it open at the face. For around a quarter of an hour, the friends and family walk around the deceased before we can close the bag. We ask the designated member of the family to disinfect the body himself or herself, with chlorinated water, before the burial takes place.

The challenge is to make these dramatic situations more humane.

We must avoid psychosis. For example, we only wear the full protective gear inside the isolation center or when medical staff are treating sufferers. A few years ago, we would have gone about dressed like spacemen the whole time! And the isolation center itself is no longer completely enclosed. If they are well enough, patients can go out onto a little terrace to chat with visitors. Friends and family visiting patients in the isolation center wear light protective equipment.

Over the years, as we gain more experience of hemorrhagic fever epidemics, we’re adapting our practices to make them more humane, and to respect the dignity of those affected. The aim is to find a subtle balance between safety and local cultural rites.

What are the current priorities for the MSF team in this Ebola epidemic?

We must identify the transmission chains of the disease and step up the measures to control the epidemic. This work will shape the future course of the epidemic. It’s essential to understand where and how the virus is spread. That will enable us to isolate infected households and have a major impact. The incubation period of Ebola hemorrhagic fever is 21 days. So, before we can talk about the end of the epidemic, we must wait three weeks after the discovery of the last infected patient.