DRC: MSF Steps Up Medical Assistance to People Affected by Violence in the North 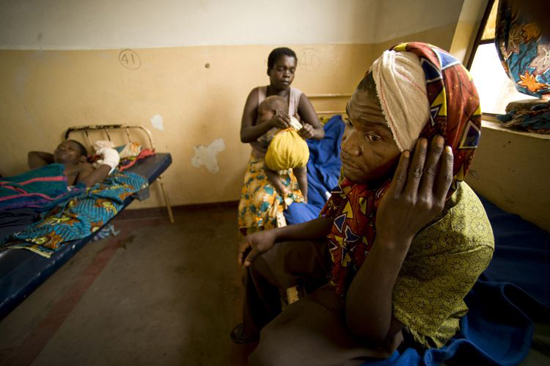 At right, a man recovers in the MSF-supported Dungu Referral Hospital after he was attacked by Ugandan rebels from the Lord's Resistance Army.

In the areas of Haut-Uélé and Bas-Uélé, in the northeast of the Democratic Republic of the Congo (DRC), Ugandan rebels from the Lord’s Resistance Army (LRA) have committed violent attacks in response to military operations launched by the armies of Uganda, DRC, and Southern Sudan.

MSF is providing assistance to this abandoned population, which has been left to its fate in a highly isolated region. For this reason, MSF has opened two new projects, providing support to a health center and two referral hospitals in Faradje and Niangara.

MSF has been working in this region since last September, notably at the hospital in Dungu, in Haut-Uélé district. Now teams are stepping up activities in light of increased attacks on the civilian population, which has resulted in an influx of displaced people who have no access to medical assistance.

“In February, our teams carried out evaluation missions in different parts of the region, focusing on areas receiving little or no coverage from other humanitarian organizations, at least from a health aspect,” said Amaury Grégoire, MSF emergency coordinator. “The situation is critical. Health structures are either non-existent or in a deplorable state. There are few or no medicines available and those that are, are simply not affordable. We have also had to cope with a lack of medical staff; the majority have fled the violence along with the rest of the population.”

The nutritional situation is also cause for concern. “In addition to a number of crops being destroyed by severe rains, the displaced populations, far from home, are not in a position to grow any food at all,” said Grégoire.

In Niangara, close to 10,000 displaced people have found refuge in the town center and 15,000 refugees have settled in the outskirts of the town. The MSF teams are providing support to the referral hospital and an outlying health center, mainly treating malaria, acute respiratory infections and sexually transmitted infections, and seeing some 250 people a day in the hospital. Special consultations have been set up for victims of sexual violence.

In Faradje, not far from the Sudanese border, several thousand people have taken refuge in three different sites. The MSF team has started supporting the general referral hospital, carrying out some much-needed refurbishments to bring it up to standard. It has also installed water tanks, providing the hospitable with safe drinking water.

“Directly affected by the atrocities”

According to the United Nations High Commissioner for Refugees (UNHCR), the total number of refugees in Haut-Uélé and Bas-Uélé currently stands at around 190,000.

“These people have fled terrible violence and lived through the worst horrors,” Grégoire said. “They have lost a father, a mother, a husband, a wife, or a child. Most of their villages have been burnt to the ground. They have been directly affected by the atrocities. Thousands of people are suffering from the violence they have lived through or seen: some have been kidnapped, raped, beaten up, or simply killed.”

MSF has introduced special consultations for the victims of sexual violence. An MSF psychologist will join the team soon to train the local personnel on providing psychological care to victims.

It is not only the displaced who need urgent humanitarian assistance in Haut-Uélé and Bas-Uélé. Many of the resident families offering them shelter are in an increasingly precarious situation themselves.

“The displaced people have been offered shelter and help by the local families,” said Emmanuel Lampaert, MSF medical coordinator. “Initially, this is a positive thing, as it helps new arrivals to survive. However, in the long term, this system undermines the overall standard of living for both the displaced and the host families. And so it is an even bigger group of people who need help and their needs are huge.”