“We are worried that they are sleeping out in the bush with no shelter, no food, no way of getting medical care, and much more vulnerable to attacks." 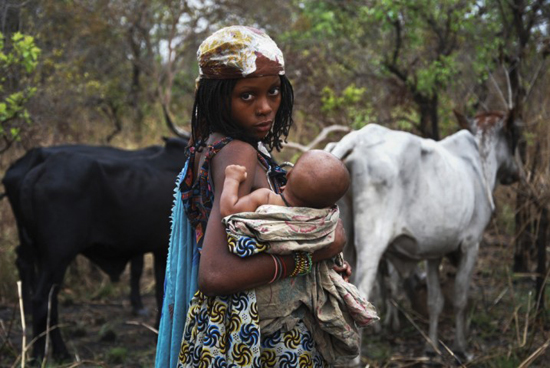 An Mbororo woman near the village of Nambia, having been forcibly ejected from a sanctuary several hundred Mbororo women, children, and elderly had built this past December.

Over a recent three-week period, a Doctors Without Borders/Médecins Sans Frontières (MSF) team in the northeastern reaches of the Democratic Republic of Congo carried out more than 500 consultations for a group of 600 nomads?women, children, and elderly people?who had gathered in a makeshift camp they?d hoped would provide some sanctuary from militia groups in the area. But they were then forced to leave the camp and fled into the forest, putting their safety and health at even greater risk, MSF fears.

?When 600 women and children arrive suddenly and set up camp next to a town in northern Congo, an alert signal flashes in your brain,? said Azaad Alocco, MSF project coordinator in the town of Niangara, in the Haut-Uélé district. ?The terrible thing about the area where we are working is that people deserting their villages and fleeing for their lives is not uncommon. Lord?s Resistance Army rebels are known to operate in this area. But this new group that came in early December was clearly different.?

Attacked in the Bush

Since May 2009, MSF has had a team based in Niangara that supports a Ministry of Health reference hospital and runs medical clinics in two nearby villages. This is a relatively remote, heavily forested part of DRC, not far from the country?s borders with southern Sudan and the Central African Republic. ?Most of the villages around here are empty, houses and fields overgrown, the only sign of life is a rare patch of manioc plants where a farmer has ventured out to try to grow some food for his family," said Azaad. "Virtually everyone has come to Niangara town, and they?re too afraid to return home.?

At the start of December, a group of 600 women, children, and elderly people arrived in the area and started to build makeshift shelters on the outskirts of town. They were nomadic herders known as Mbororos, who have for years moved through several central African countries. But they were new to Niangara.

?They told us that they had been driven out of the neighboring district and were now afraid of being targeted by FARDC (Congolese Army) soldiers here in Niangara,? explained Azaad. ?They said that the women, children, and elderly had come to Niangara to avoid being raped or kidnapped in the bush. Even for nomads used to a hard life, the conditions in their makeshift camp were bad, with no water, no hygiene facilities, and even the few bits of plastic sheeting they had for making shelters were stolen.?

In the next three weeks after the Mbororos arrived, the MSF team conducted 541 consultations for the them in the hospital and in their camp. ?For a group of 600 people, 541 consultations in a three-week period is a very high number and clearly demonstrates that these people need access to medical care,? said Dr Morten Havdal, an MSF doctor in Niangara. ?We treated many severe malaria cases, intestinal parasitosis, respiratory infections, skin infections, and other pathologies.?

On the morning of December 21, some people in the area informed the MSF team that they had heard gunshots in the direction of the Mbororo camp. The team later found that an adolescent Mbororo boy had been shot in the groin. ?We stabilized the patient and drove him directly to the hospital for surgery,? said Dr Havdal. ?The surgery went well, and, luckily, the bullet had passed through his pelvis without creating too much damage. Two weeks after the operation he could get up and walk out of the hospital himself.?

On the afternoon of January 5, the MSF team went to the makeshift camp to prepare the clinic they were planning to run there the following day. ?We found the camp almost empty, nearly 600 people suddenly gone,? said Azaad. ?Armed forces were ordering the last few Mbororos to leave the camp immediately. It was very sudden and unexpected.?

Numerous people witnessed FARDC soldiers entering the camp earlier that morning, ordering the Mbororos to leave, and seizing all their possessions and animals, leaving them with only their donkeys for transport.

That evening, an MSF team found a group of a hundred or so women and children huddled by the roadside just north of the river Uélé, without any shelter or food. Night falls quickly in the forests of Haut-Uélé, so there was only time to organize a rushed emergency food distribution for them.

Concerns for the Future

At present, the women and children who were driven from the camp are living with several hundred Mbororo men in the bush around the town Nambia, where MSF runs a medical clinic when it is safe enough to do so. ?We are worried that they are sleeping out in the bush with no shelter, no food, no way of getting medical care, and much more vulnerable to attacks and harassments than when they were in their camp at Niangara,? says Azaad. ?It seems these people meet a hostile reception from authorities and local civilians wherever they go. They are currently hiding in places where we cannot reach them. We hope that those who need medical attention can get themselves to our mobile clinics at the Nambia health center.?

In the Haut- and Bas-Uélé Districts in northern DRC, MSF provides primary and secondary health care in and around the towns of Dingila, Doruma, Dungu, Duru, Faradje and Niangara. At Dingila and Duruma, MSF also runs dedicated sleeping sickness programs. The medical teams conduct more than 10,000 consultations per month in hospitals and health centers and provide hundreds of mental health consultations for people affected by violence. The insecurity in the region means that there is regular displacement of entire communities; the MSF teams therefore conduct emergency distributions of food and survival material when necessary.