Despite difficult logistical challenges, MSF has begun an emergency response to the measles epidemic in Maniema. 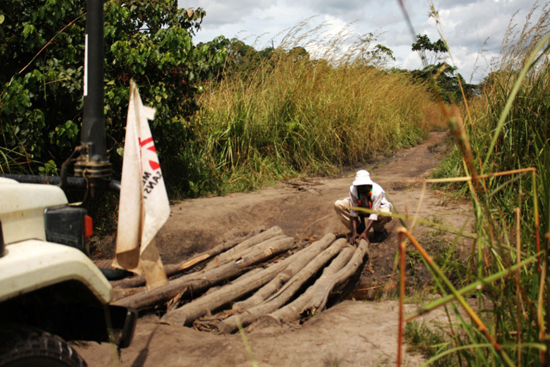 MSF logisticians transport staff and medical materials for a measles intervention over difficult roads between Kindu and Kibombo in Maniema Province.

A measles epidemic that has began in the Democratic Republic of Congo (DRC) in late 2010 reached the remote province of Maniema in March 2011. Despite difficult logistical challenges, Doctors Without Borders/Médecins Sans Frontières (MSF) teams have begun an emergency response there.

Organizing and Treating In an Emergency

Since launching its activities in March, MSF has treated more than 2,000 patients across 12 sites in Maniema Province. Nearly 250 of these patients required hospitalization. 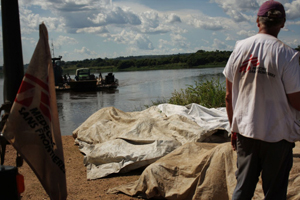 To reach some remote areas, MSF must transport materials and staff by boat.

"We had to rely on community networks and medical staff to inform the population that we were here because most people did not seek treatment at medical facilities," said Dr. Bobo Makoso, MSF medical coordinator in Maniema. "The community awareness efforts worked well. In Likeri, for example, patient visits rose from approximately 30 to more than 100 per day."

MSF teams, working with the Ministry of the Health, have set up eight outpatient treatment sites for patients with simple measles cases and three treatment centers for complicated cases in the regions of Kibombo and Samba, which are the most affected areas in Maniema Province. A team also provides regular support to the Tchuki referral center, in the Kabambare health zone, in the eastern part of the province.

The infrastructure in Maniema is in poor condition, which makes it difficult to reach the sites and discourages many health care actors from organizing programs in this part of the country. MSF is among the few present in the province today.

The teams rely on an array of transportation methods—canoes, motorcycles and cars—to reach the furthest populations and deliver medical supplies. “Maniema is a logistical challenge,” said MSF logistician Roudy Jeantal. “You’ve got to be prepared for every eventuality.  The roads are impassible, cars get stuck in the mud when it rains, and the bridges are destroyed. You’ve always got to be creative.”

MSF sets up outpatient treatment centers and sends medical personnel in mobile clinics to provide greater coverage, since some patients do have the transportation to reach a health center. "Our mobility has allowed us to reduce the mortality rate in the areas where we are working," said Dr. Makoso. 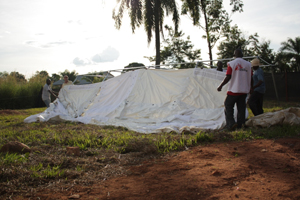 MSF staff put up a tent where they will store materials on site during a measles intervention.

A mass vaccination campaign is the only way to stem the measles epidemic, but the national response has been slow. MSF teams are prepared to assist the Ministry of Health by providing logistical support, including transporting vaccines and maintaining the cold chain in Kibombo, Samba, and Tunda regions.

"Treatment is critical, but vaccination is essential to prevent cases from spreading," Dr. Bobo says. "The vaccination campaign is in the organizing phase, but we have to continue to provide treatment while we are waiting to launch prevention efforts, so that's what we're doing now."