DRC: An Update on MSF Activities in North Kivu 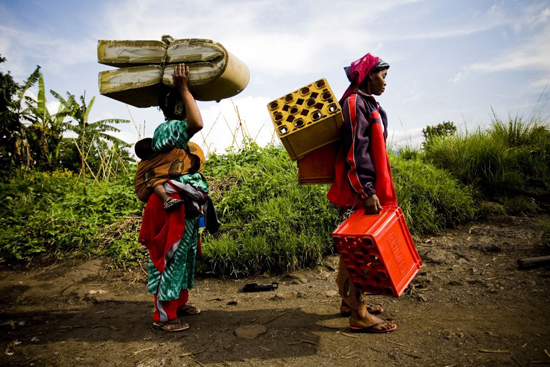 Displaced women leave the Kabaya area with their belongings during an outbreak of violence in North Kivu province.

Doctors Without Borders/Médecins Sans Frontières (MSF) teams are continuing to work in Goma and in other parts of North Kivu. The organization remains very concerned about the many people still on the move, fleeing ongoing fighting. Many of the displaced and local residents continue to be in urgent need of food, clean water, healthcare, and basic items, including blankets and shelter materials.

Teams continue to work at a hospital and health centers in Rutshuru and Kiwanja, where the situation is now stable. Activities in the hospital are becoming routine; on average, ten surgeries are now performed per day. There are a number of requests from health centers to transfer patients from Kinyandoni and Kibututu to the hospital in Rutshuru. Among these patients, there are several children affected by severe or moderate malnutrition.

At the health center in Rutshuru town, there were 863 consultations last week—a quarter of them for malaria, and almost a third for respiratory infections.

In total, in October surgical teams performed 406 surgeries at Rutshuru hospital; 110 of these surgeries were for gunshot injuries.

West of Rutshuru, in Nyanzale, the situation has been calmer recently. MSF is trying to increase its international staff presence at the health center, where there are 25 children being treated for malnutrition, and 19 inpatients.

To the north, in Kayna, security is poor and MSF teams was unable to remain at the hospital or to send mobile clinics to Kanyabayonga. They made a short visit to Kanyabayonga on November 15, but as there was still fighting in the area as of November 18, the team has not yet returned.

In Kibati, just north of Goma, the MSF cholera treatment center reported about eight to ten new cases per day for the week ending November 14. In the past few days, there has been an increase to about 16 cases per day. Another MSF cholera unit in Goma treats, on average, seven to ten cholera patients per day. MSF continues to truck clean water to Kibati camp.

Cholera consistently recurs in parts of North Kivu. As usual, MSF is treating cholera throughout the province. Recent fighting has led to an increase in the number of cholera patients because the risk factors include poor sanitation, lack of clean water, the constant movement of the population, and crowded conditions in displaced camps.

An MSF surgical team just started working in one of two operating theatres at Goma general hospital. On November 17, five surgeries were performed.

West of Goma, MSF is working at the hospital in Kirotshe and supporting health facilities in three locations beyond the frontline: in Mushake, Karuba, and Rubaya. In the past week MSF mobile clinic teams have performed some 390 consultations. Over the same period, there were 227 outpatient consultations at Kirotshe hospital and 92 patients were admitted.

In nearby Shasha camp, an MSF psychologist has trained local staff to counsel people suffering psychological problems as a result of the conflict. The counselors will start seeing people today.

Northwest of Goma, in Kitchanga and Mweso, MSF is continuing to provide primary and secondary healthcare and run mobile clinics.