More than a week after several natural disasters in the East Asia and South Pacific regions, MSF mental health staff are beginning to train local counselors, as well as give direct psychological support. 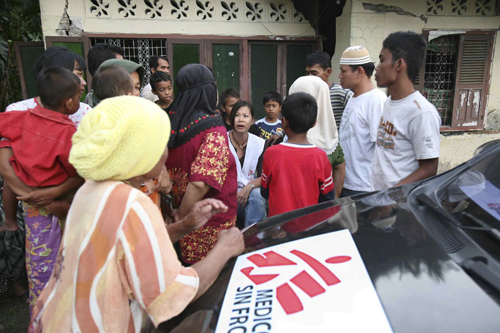 An MSF aid worker speaks with residents in the city of Padang a week after an earthquake ravaged parts of the city and surrounding areas.

Doctors Without Borders/Médecins Sans Frontières (MSF) teams currently providing medical and relief aid in East Asia and the South Pacific after several natural disasters are integrating mental health care into their activities. More than a week after the traumatic events, mental health staff are beginning to train local counselors, as well as give direct psychological support.

Mourning without corpses in Indonesia

In Indonesia, many people have disappeared and any hope of finding survivors has almost vanished. Bodies are still trapped under the rubble and relatives are waiting. Marlene Lee, an MSF psychologist, provides support to some families in the most affected areas.

“Yesterday, we went to Tandikat, one of the most affected areas, in the hills north of Pariaman where several villages were destroyed by a landslide,” Lee said. “People who have lost family members are still waiting for the bodies to be retrieved.”

But because most of the roads have been destroyed, it is especially difficult to bring in the heavy machinery needed to search the rubble. People go back to the site each morning and sit the whole day waiting for the search teams. “It’s very important that people are able to give their loved ones proper burials as soon as possible,” Lee said. “A lot of these people are in a difficult state now. Most are still in shock, they are grieving, they have not slept for a long time, they have lost their appetite, and they have many worries about the present and the future. There are a lot of unanswered questions.”

Counseling by local volunteers in Samoa

There were fears of more devastation when a tsunami warning was issued on the morning of October 8, after earthquakes struck off Vanuatu in the South Pacific. Thankfully, there was little damage but there was panic on several islands. In the Samoan islands, part of the population again sought refuge on higher ground. It was a week after an earthquake and subsequent tsunami which took 137 lives and destroyed many houses.

“Obviously, people are traumatized,” said Veronique de Clerck, the emergency coordinator in Samoa for MSF, after spending several days evaluating the area that took the full impact of the tsunami on the southern coast of Samoa. “They have lost all their assets and some people have lost a large number of relatives. There was one family who lost 13 members. People need time to mourn and to bury their relatives and friends, but after a few days, they are probably more ready for counseling.”

Psychosocial support is currently being delivered via mobile clinics where people are living out in the open. “There have been a lot of volunteers—Samoans themselves have been putting up their hands and saying they want to help, which is great,” de Clerck said. “However, they lack the experience to address such specific problems.” In the next few days, an MSF psychologist will train a team of Samoan counselors who will be able to offer psychosocial support, and to identify people who need more professional counseling and refer them to psychologists.

Difficult living conditions in the Philippines

There are also urgent worries facing people in the Philippines—some of who have not yet received adequate aid or are living in difficult conditions. Thousands of people are still sleeping in evacuation centers and some will probably have to wait several weeks before being able to go back to their homes, as some areas are still flooded. “We are still living in this corridor. It’s noisy, windy...it is not a place for a family,” said one father in an evacuation center in Pasig. Next to him, a woman was anxious because her home had been destroyed. “I don’t know what to do . . . I have lost everything,” she said.

For some, identified as the most vulnerable, MSF is offering help in the form of primary health care and mental health care, plus the distribution of relief items. MSF is also involved in water and sanitation work in affected areas.