The Effects of Violence in Kenya Continue

MSF focuses on the displaced, and getting TB and HIV patients back on treatment 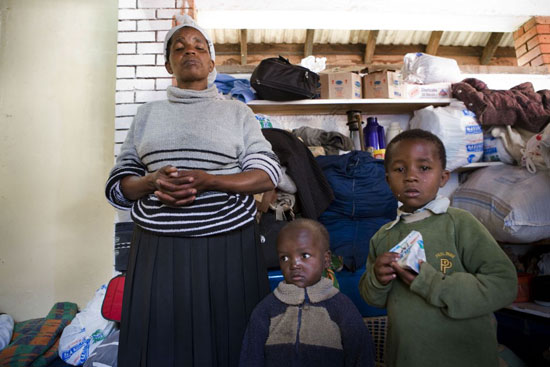 As protests continue throughout Kenya, Doctors Without Borders/Médecins Sans Frontières (MSF) teams respond to the additional needs created by the violence of recent weeks. In Nairobi, where MSF has provided HIV/AIDS and tuberculosis (TB) care in the slums for over 10 years, medical teams have set up extra clinics and first-aid posts in order to assist any people wounded during the protests. MSF teams in Busia and Homa Bay are continuing to provide HIV/AIDS care and are assisting displaced people. In other parts of western Kenya, emergency teams that arrived in the country to help deal with the increased needs continue to provide assistance to the thousands of people who have been affected by the violence. One of the main challenges will now be to continue to respond to indirect consequences of violence for the most vulnerable displaced people, who will probably remain displaced for months.

MSF has set up two first-aid posts in Mathare slum. Over the course of three days, January 16 to 18, 32 victims of violence were treated in these facilities. Several of them, including a young child, had bullet wounds and were referred to a nearby hospital; and seven were so severely beaten, they also needed hospitalization. 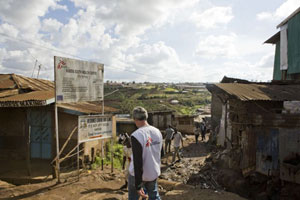 An MSF team member enters Kibera South Health Center, where MSF is treating those who were wounded in the post-election violence. Kenya 2008 © Brendan Bannon

On January 18, the MSF team in Kibera slum received two children—one was 13 years old the other was even younger—who had each received a bullet in the leg. In preparation for three days of rallies announced in Nairobi, MSF had opened two of its three clinics in Kibera (Kibera South Health Centre and Gatwekera clinic) in order to treat a potential influx of wounded people. MSF is working with a Kenyan ambulance service to ensure that anyone who is injured can be transported to its clinics.

The MSF team was also able to carry out HIV consultations as usual at these two clinics and in the nearby Mbagathi hospital. However, the violence and ongoing insecurity has prevented some regular patients from attending MSF’s clinics in both Kibera and Mathare. Between December 31 and January 14, for example, 290 patients missed their appointments at MSF’s health facilities in Kibera and at Mbagathi hospital.

This is an issue of great concern for MSF. If HIV/AIDS and TB patients do not regularly take their medicines, their health will deteriorate, and there is a risk of resistance developing. If TB patients do not take their medicines, there is also an increased risk of infection for those around them. MSF has set up a free phone hotline for both MSF patients and patients from other health structures that are currently closed, so that they can get their treatment. As of January 21, MSF patients throughout Kenya who have not been able to attend their appointments and may have been displaced by the insecurity will be able to call for guidance on how to get their medicines and the location of health center closest to them. 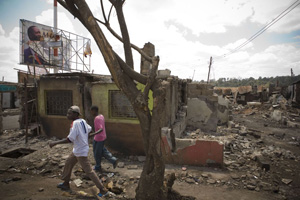 Emergency medical and logistical staff are working in several large sites in western Kenya where thousands of displaced people have gathered. The situation is fluid and the needs varied. In some areas, MSF teams are working in sites where thousands of people have settled, providing primary health care, distributing non-food items, supplying clean water and installing sanitation facilities. In others, teams are finding smaller groups of displaced people who have not yet received any assistance. As a result, MSF staff are constantly evaluating the needs and providing ad hoc responses, both for the displaced families and the local population. In Kisii, for example, the needs were for medical materials for the hospital after the arrival of many patients, and for basic items, such as sheeting and cooking pots, for displaced families helped by the local population. Around Londiani, the need was for medical consultations, which were done by mobile teams.

In Nakuru and Molo, extra staff have been sent to help run mobile clinics that visit different sites on rotation, providing medical care to displaced people. As the situation is changing in Eldoret—the city saw a large influx of people in late December, and many have now left—the MSF team has refocused its activities. The four-person team will now work on providing clean water and sanitation to three internally displaced people’s (IDP) camps around the city, and will remain on standby to respond to any emergency needs that arise in the coming days. Distribution of jerry cans, blankets, and other basic items is taking place in two settlements: Timboroa, and Muge Secondary School, both in Koibatek district. 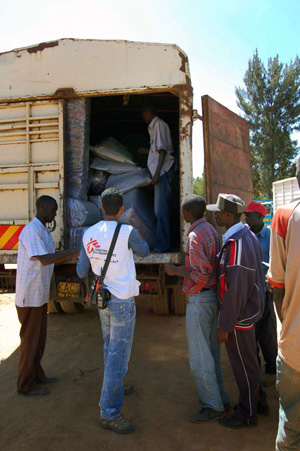 Assistance to the 7,000 displaced people in Cherangani is ongoing. MSF has set up hundreds of tents and latrines, and distributed 7,000 liters of water in the camp. An MSF team organized a vaccination campaign for 1,000 children against measles and polio, and plans to help supervise a rapid nutritional assessment to be carried out by the Ministry of Health (MoH).

In Kitale and Webuye, MSF staff are supporting two hospitals. Following fierce clashes on January 16 between communities in Endebes, seven people died during their transfer to Kitale hospital, and five wounded were treated by the MoH surgical team with assistance from MSF. In Endebes itself MSF has started distributing plastic sheeting and material to build latrines in several settlements where people had received little or no aid. On January 18, a truck and a cargo plane loaded with 70 tons of medical and logistical material was sent from Nairobi to western Kenya.

As more agencies start working in cities like Eldoret, Nakuru, and Kitale, MSF will hand over its activities and increasingly focus on assessing and responding to the needs in smaller rural areas where pockets of displaced people are reported to be living with little or no assistance. In the coming days, MSF will start providing aid to displaced people in Kiminini, Kesogon, and Kapcherop.

Long-running HIV/AIDS projects in Busia and Homa Bay have resumed normal activities, however, on January 17, medical staff weren’t able to get to the hospital in Busia because the roads were blocked. In addition to providing HIV/AIDS care, teams in Busia are also assisting displaced people who have sought shelter near the police station in the town.