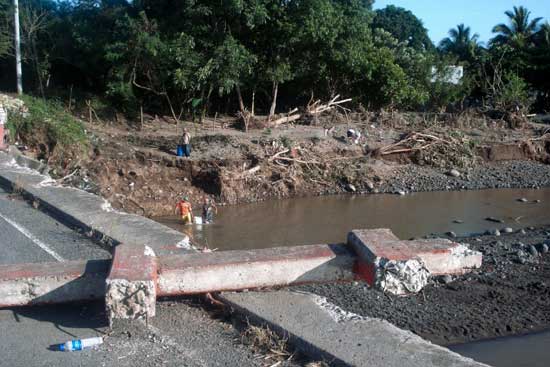 Floods and mudslides have taken the lives of 150 people in El Salvador. MSF teams are based in the region of La Paz, concentrating on the distribution of non-food items and giving mental health support to the victims.

During the weekend of November 6-9, a fierce storm struck El Salvador, triggering floods and mudslides that killed 150 people and displaced more than 13,000. The storm, which is unnamed, came only few days after Hurricane Ida churned along the Atlantic coast of Central America.  Salvadorian authorities have declared a state of emergency in the regions affected and many communities have been isolated for days because of collapsed bridges.

Doctors Without Borders/Médecins Sans Frontières (MSF) has sent a team of nine—doctors, logisticians, a nurse, a water and sanitation expert, and a mental health officer—to help the victims of this natural disaster. The MSF Emergency Unit, based in Panama, has sent a planeload of medical and relief material, including water purification equipment and 15 days worth of medicines, surgical materials and first-aid kits.

MSF teams have been assessing the needs of the people in the two most affected regions, La Paz and San Vicente, both on the Pacific shoreline. "People tell me how they were stuck in their homes, how the water was rising and rising and they couldn’t escape," says Xavi Punset, MSF medical coordinator. The MSF mental health officers have done counseling in the shelters and have seen how, despite the sadness people experienced after losing everything, the civil society reacted quickly and immediately set up shelters for those who had been affected.

The first assessments indicate that medical needs are being covered by the government authorities and national NGOs; shelters also are in good condition. The MSF teams will be working in the region of La Paz, on the outskirts of Zacatecoluca and La Libertad, concentrating on the distribution of non-food items and giving mental health support to the victims.

"The question is: What will happen in the post-emergency phase?"

MSF will continue assessing the needs in the more remote parts of the region of San Vicente and will look into setting up a mental health program for those who have lost their homes. "The question is: What will happen in the post-emergency phase?" says Punset. "Some houses have been flooded and people will be able to go back in the future. However, others have been completely destroyed, so for many people who are now in the shelters, there is nothing to go back to."