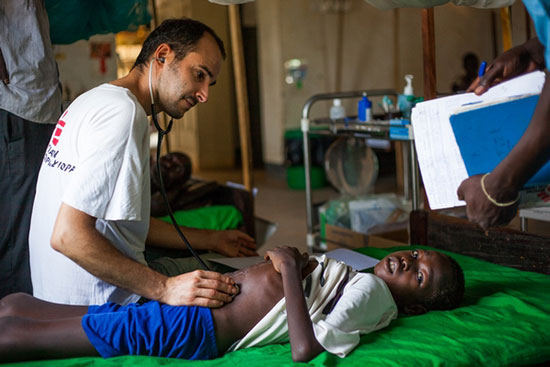 The rainy season is here, and with it increased danger for thousands of displaced people in South Sudan who are already in urgent need of medical care for injuries and deadly diseases like malaria.

But with your help, Doctors Without Borders can deliver lifesaving medical care in South Sudan and other conflict zones around the world.

Donate now to help us save more lives >>

“This will not be a place where people can remain alive.”

These are the words of Doctors Without Borders/Médecins Sans Frontières (MSF)’s director of operations in South Sudan, Dr. Bart Janssens, reporting on the status of 120,000 villagers who have fled into unsafe swamps to escape escalating violence near their homes in Pibor County, South Sudan.

These men, women and children are in grave danger. They’ve already fled for their lives—and many are hungry, exhausted, injured and ill. Entirely cut off from medical care and other lifesaving aid, they are hiding in areas that will shortly be under a foot or more of flood water as the rainy season approaches.

Donate today to help Doctors Without Borders deliver lifesaving medical care in South Sudan, and other conflict zones around the world where people are trapped by violence.

Doctors Without Borders teams have been dispatched to deliver first aid and to assess additional emergency medical needs for the thousands of villagers seeking safety out in the bush.

The imminent rainy season is going to flood the areas where people are hiding, hatching malaria-carrying mosquitoes. Many people will die of malaria, diarrhea, pneumonia and other respiratory diseases unless they have access to medical care, and immediate action is needed to avert catastrophe and save their lives.

Our teams are doing all they can to reach the people most in need of medical care on all sides of the conflict. In addition to sending out mobile clinics, Doctors Without Borders surgical teams are performing emergency surgeries and delivering urgent care to those wounded during the most recent outbreak of fighting. At our hospital in Bor, we’ve treated 128 people with gunshot wounds alone—but tens of thousands of injured, sick and traumatized people have not yet been reached and are still in danger of dying.

Donate now to support our efforts to deliver lifesaving care in South Sudan and other countries around the world where people are most in need of emergency medical aid.

At times like this we count on the generosity of supporters like you. We are grateful for any gift you can make to help us reach our goal and respond to the people most in need.