Empty Hospital Beds in the Capital of Helmand, Afghanistan

MSF has started to work again in Afghanistan after an absence of five years. Here, MSF General Director Christopher Stokes explains why it is crucial for MSF to base its activities in the country on three pillars: providing free medical care, not accepting funds from governments, and keeping all weapons out of the hospitals. 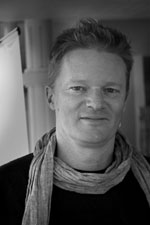 Doctors Without Borders/Médecins Sans Frontières (MSF) has started to work again in Afghanistan after an absence of five years. MSF General Director Christopher Stokes, has extensive work experience in the country, and he has recently been back to take stock of the MSF projects.

In this article, he explains why it is crucial for MSF to base its activities in the country on three pillars: providing free medical care, not accepting funds from governments, and keeping all weapons out of the hospitals.

Afghanistan has some of the worst health indicators in the world. In a province like Helmand, the noise of war is heard around the clock as helicopters take off in the night, and gunfire and rockets are audible in the distance. In this context, ordinary health problems become medical emergencies because movement from villages to towns is very dangerous, and in many places simply impossible.

MSF has just started working in the only public general hospital still functioning in Helmand, in the provincial capital Lashkargah. This is a hospital that has, over the last few years, been the recipient of a great deal of overseas aid. Yet when I walked through the different wards, what I found most striking was the absence of patients. Generally only a third of beds are occupied. On the morning of our visit, we counted 40 patients for 124 beds.

Why so few patients? In truth, the medical services provided in this hospital have been patchy at best. Most of the medical staff only work in the mornings—in the afternoons they leave to work in their private clinics. Medical practice in the hospital is out-of-date; drugs are routinely over-prescribed—at times seven different antibiotics are prescribed when one would suffice. Then there is the cost of the medications—while the consultation may be free, patients are nearly always sent out to private pharmacies to buy drugs. The cost of these can be prohibitive for poor families, particularly when you add in the cost they incurred travelling to the hospital in the first place. Even if they have the means, the drugs they do manage to buy can be of low quality or even counterfeit. 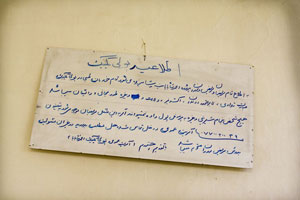 A sign at the entrance to MSF's maternity ward in Ahmed Shah Baba hospital in eastern Kabul says that all care is free and that any violation of this rule should be reported to the hospital director.

While the hospital may not be operating to its capacity, it is nevertheless full of donations of sophisticated medical equipment. Digital x-ray machines from Europe and China, laboratory machines, surgical equipment and scialytic lamps—many still unpacked—are piled up in the basement. They were donated by governments, through the provincial reconstruction teams of the International Security Assistance Force (ISAF) or via direct bilateral aid. Usually with little explanation or instruction.

While I was there, a child with measles was brought in. His mother told us there were at least eight more children with similar symptoms in her village. Measles is a highly contagious disease that can be fatal if untreated. Her child suffered from complications, and needed oxygen to get through the night. However, the only functional oxygen machine was in the medical ward where the presence of other children led to a dangerous risk of cross infection. Nevertheless, this is where he was brought. Meanwhile we counted at least six mobile oxygen generators gathering dust in the basement!

The child is a victim of this conflict and his plight encapsulates this war. He contracted an easily preventable communicable disease, simply because he lives in a war-torn region where vaccination coverage is scarce. The child's mother had no choice; she took a risk by coming to Lashkargah, but she had to wait until it was almost too late. Even after eight years of donations from governments and ‘dumping’ of medical equipment, the hospital is still not ready to receive patients and treat them properly.

Earlier, a pregnant woman who was injured in an explosion finally made it to Lashkargah 48 hours later. Her unborn baby was also wounded in the blast. The mother survived the delivery although her uterus had been perforated. But her baby died from sepsis. Had she been able to reach a hospital faster, perhaps both lives could have been saved.

After nearly five years of absence, following the murders of five of our colleagues in 2004, the return of MSF is cautious, balancing risks against needs. Our sole objective is to assist those most in medical need, to help as many people as possible to survive the conflict. In order to be accepted by all parties involved in a conflict, a private medical-humanitarian organization should demonstrate, and clearly communicate, complete impartiality, and independence. For MSF this means, for instance, that we choose not to accept any funds from any governments for our work in Afghanistan or Pakistan and we reject any attempt from other forces to control or direct us.

The once clear distinction between armies, reconstruction and development activities and humanitarians has become very confused; at present, all assistance actions, including hearts and minds initiatives implemented by armed forces, are labelled ‘humanitarian’. The key difference is that strictly humanitarian organizations such as MSF work to provide immediate lifesaving care on the basis of medical needs alone, with no other objectives. There is a practical need for clear distinctions to be made. Why? Because humanitarian organizations such as MSF should seek to help populations in need no matter where in the country they live or what battles are being fought there. An organization (of whatever political complexion) that aligns itself with one side through funding or otherwise, simply will not and cannot do this. Second, choosing sides often requires relying on armed protection and that can make the organization or the structure they support a military target.

Currently, there are many medical facilities in Helmand that have been physically rehabilitated by ISAF and which are patrolled by NATO and Afghan troops. They are viewed as military targets by armed opposition groups. Meanwhile, clinics run by local independent NGOs, which are often intentionally left in a state of disrepair to avoid association with ISAF-supported health facilities, have come under attack by ISAF forces mistaking them for opposition hideouts. The result is that clinics themselves have become a battleground, putting patients in danger and making them more reluctant to seek healthcare.

Central to restarting our work in Afghanistan has been the demilitarization of hospitals through the enforcement of a strict no-gun policy in the health structures where we work. We are asking all parties—the police, the coalition forces, and the armed opposition—to leave their guns at the gate.

As well as Lashkargah provincial hospital in Helmand, we are also starting to work in a hospital east of Kabul in a town whose population has mushroomed with the arrival of Afghan returnees from Pakistan, and displaced people fleeing the war in the eastern provinces of Afghanistan. Despite the needs and low health service coverage, this area has so far been neglected by aid agencies because it is not a priority in counter-insurgency aid policies. Much funding is set aside for large infrastructure projects in Kabul, but few international funds are made available for immediate assistance.

We have medical teams of Afghan and foreign staff now working in both hospitals, where our aim is to provide quality, lifesaving, and absolutely free medical care with effective drugs, in all areas including maternity, pediatrics, surgery and emergency rooms The collaboration with the resident medical staff to agree on best practice is key. To get these medical services running 24 hours a day rather than for a few hours in the morning is a priority. MSF will seek to extend its support to hospitals and rural health centers in other provinces in 2010, but in such a dangerous environment progress will be slow.

Today in Afghanistan, there are not enough organizations independently assessing the needs of people and responding in war-affected areas. In a province like Helmand, access to care is extremely limited. Evidently, the delivery of aid for political rather than humanitarian objectives has its limitations; it can fill hospital basements with expensive medical machinery but not fill beds with the patients in need of treatment coming from all sides of the conflict.