At EU-India Summit, European Negotiators Urged Not to Block Access to Affordable Medicines 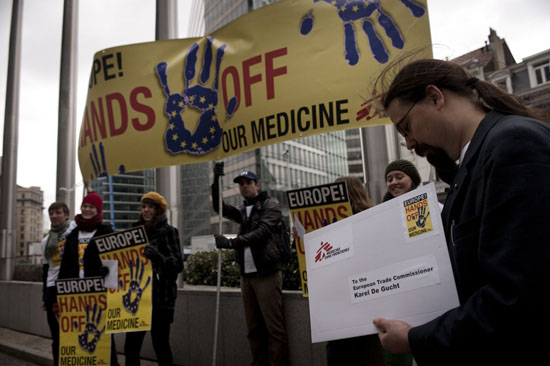 Brussels, December 10, 2010 — As leaders from India and the European Union meet for a summit in Brussels, Médecins Sans Frontières/Doctors Without Borders (MSF)—together with AIDS groups protesting in Africa, Asia and Europe—demand the EU stop pursuing measures that undermine India’s role as producer of affordable life-saving generic medicines. More than 80 percent of the AIDS medicines used to treat more than five million people across the developing world come from producers in India.

“A decade ago, people wouldn’t even bother getting tested for AIDS because they knew the drugs to treat them were too expensive anyway,” said Dr. Peter Saranchuk, HIV doctor for MSF in South Africa. “I refuse to go back ten years. We cannot let the Europeans shut down the supply of affordable medicines we and others rely on to treat patients around the world.”

India’s 2005 patent law, which fully respects international rules, is strict about what does and what does not deserve a patent, in the interest of public health. Patents are only granted for medicines that show significant innovation, which is a fact that has long upset the pharmaceutical industry in wealthy countries. European drug companies have actively—but so far unsuccessfully—sought to challenge the law in Indian courts. Earlier this month, German firm Bayer failed in its latest legal attempt to introduce a further barrier to generic competition in India. Having lost in the courts, the companies are now using the European Commission’s trade policies to try to block generic competition in India.

“We know that behind the scenes, Germany, the UK and France are the ones doing the bidding for their pharmaceutical industries to try to stamp out the competition from India,” said Michelle Childs, Policy Director at MSF’s Campaign for Access to Essential Medicines, speaking at a protest outside the summit in Brussels.

As a part of the negotiations for a free trade agreement with India, the Europeans are pushing several provisions that would limit competition, in particular something known as ‘data exclusivity,’ which would act like a patent and block the marketing of generic medicines for up to ten years. Alarmingly, data exclusivity would apply even for products that didn’t deserve a patent in the first place under India’s law. It would block the development of new fixed-dose combinations, where several medicines are combined into one pill, even though these cannot be patented in India.

“The EU is trying to give their pharmaceutical companies a backdoor route to monopoly status, when they can’t get a patent through the front door,” said Childs.

Generic medicines from India have played a critical role in scaling up AIDS treatment across the developing world because until 2005, the country did not grant patents on medicines. This allowed manufacturers to produce more affordable drugs, pushing their price down by more than 99% over the past decade. But World Trade Organization rules obligated India to start granting medicines patents in 2005. This is having a major impact on access to affordable versions of the newer generation of HIV/AIDS drugs, some of which – for example raltegravir and etravirine – have already been patented in India. Now the policies the EU is pushing would restrict the production of affordable medicines even further.

“European leaders can’t turn a deaf ear to the growing number of voices around the world asking them to take their hands off affordable medicines,” said Childs. “Vague reassurances that the EC is not seeking to harm the production of affordable medicines are not enough, as the devil is very much in the details. At this point, we want a clear statement from the EC that data exclusivity and other damaging provisions are out of the free trade agreement text.”

Protests are taking place this week in Nairobi, Bangkok, Jakarta, India and Brussels in opposition to the impact of EU’s trade policies on access to medicines.