"Even War Has Rules": Remarks On Kunduz By Deane Marchbein And Jason Cone In Washington, DC

Remarks made in Washington, DC, on December 9, 2015, by Dr. Deane Marchbein, president of MSF-USA's Board of Directors, and Jason Cone, MSF-USA executive director, during MSF's event to honor those killed in Kunduz on October 3, 2015, and to hand over our petition calling for an independent investigation to the White House: 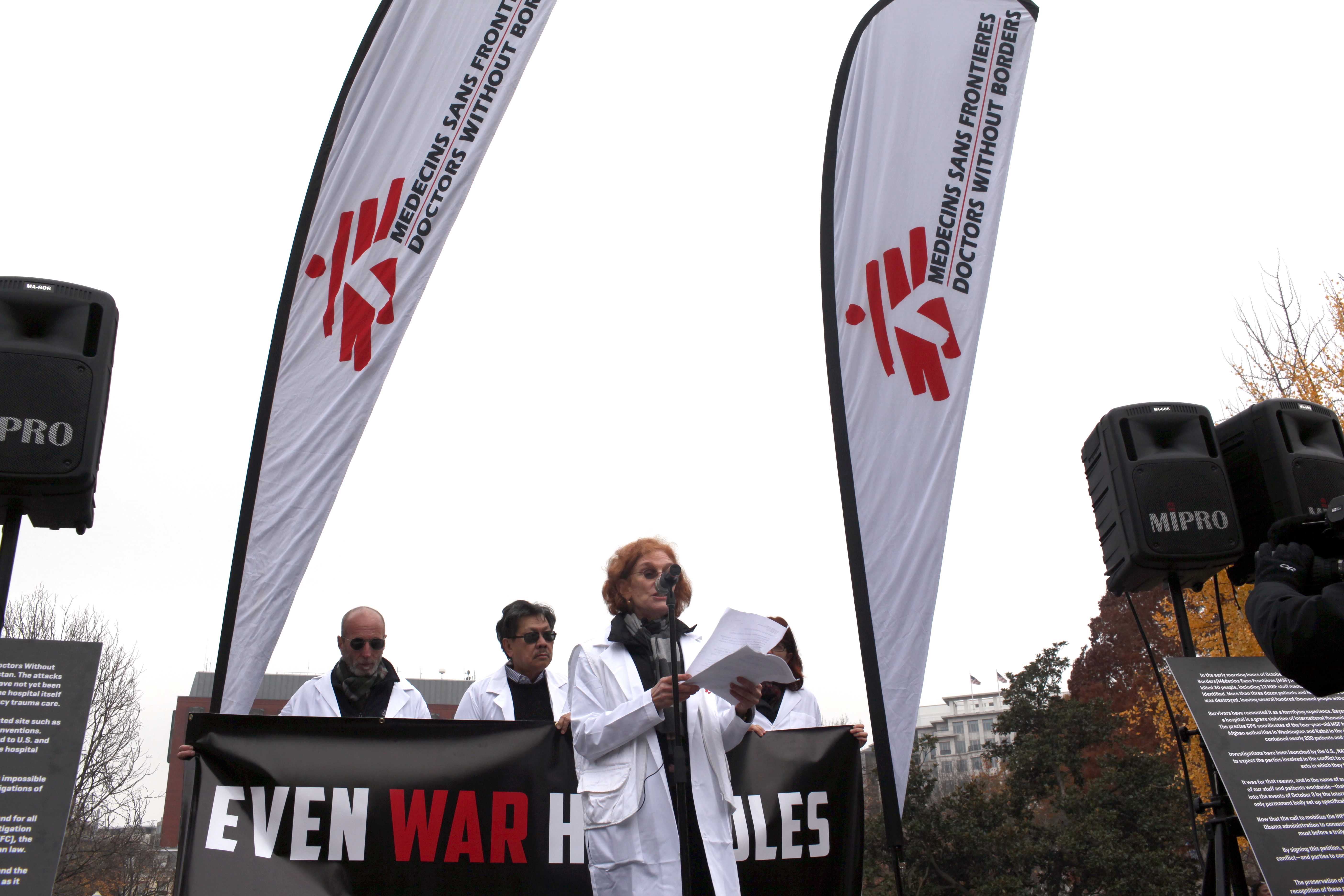 Thank you for joining us here today.

On October 3, our trauma hospital in Kunduz, Afghanistan was repeatedly struck by a U.S. AC130 gunship. The airstrikes destroyed the hospital, killing at least 30 patients and hospital staff.

Also destroyed was the only access to trauma care in northeastern Afghanistan. More than 66,000 people had been treated at the hospital since its opening in 2011. Now hundreds of thousands are cut off from lifesaving care.

The patients who were killed believed they had come to a safe place to receive treatment. They could not have imagined they would instead become targets. The staff were brave individuals, committed to providing health care for all, regardless of ethnicity or political persuasion.

There has been much talk about the US position, the rules of war, and international law, and not enough about my colleagues.

Having worked in Afghanistan at MSF’s hospital in the eastern city of Khost, I know that these were highly professional individuals who believed they were on the cutting edge of health care in their country.

Many had easier and safer options for work, but they chose to work with MSF to serve their community and to provide care for the most vulnerable.

They were committed to medical ethics and to the obligation to treat all who were suffering, regardless of who they are and how they became injured.

Today, as we call for an independent investigation in the attack that took their lives, we honor and remember them.

Zabiulah was a 29-year-old father who worked as an unarmed guard at the Kunduz hospital.  He was also a poet, who wrote the following: “Time will fly, but its memory will remain. Wounds will heal, but its stain will remain.”

Abdul Maqsood was 22 and worked as a patient information focal point. He spoke about his pride and honor of being part of MSF.

Abdul Nassir was a 22-year-old cleaner in the intensive care unit who was always looking for ways to help.

Abdul Salam was a 29-year-old husband, father, pharmacist, and passionate and hardworking operating room nurse. He had barely slept for weeks before he was killed because of the heavy volume of work at the hospital.

Lal Mohammad was 28 years old, a father, nurse and mentor to younger staff.

Abdul Satar Zaheer, 47, was the deputy medical director of the hospital, who, when asked by his son to work less, told him that he was not working but was rather was serving the Afghan people.

Dr. Aminullah Bajawri was a 32-year-old father and emergency room doctor who was kind to children and who dreamed of becoming a neurosurgeon.

Dr. Mohammad Ehsan Osmani was a 32-year-old intensive care unit doctor, who, on the night of the attack, declined to rest because his patients needed him.

Mohibullah, 38, was a dedicated father and an experienced emergency room nurse. Whenever he had the time, he would study books or seek advice from his colleagues.

Najibullah, a 27-year-old father, was a cleaner in the emergency room. He was well-liked, always talkative, happy, and kind. He frequently went beyond his cleaning duties to work as a caretaker of patients.

Naseer Ahmad was a 23-year-old intensive care unit nurse. He often took responsibility for the critical patients by himself; a sign of his great commitment to his job and to his patients, especially those without family members to care for them.

Shafiqullah was 39 years old and had been working as a guard. He treated everyone with kindness and was very committed to his job. He leaves behind four children.

Tahseel, 35, was a father and a greatly valued member of the pharmacy team at the Kunduz Trauma Center. The pharmacy was very well organized thanks to him, and he was prepared for any emergency.

All of these men, and the patients, left behind unfulfilled dreams and families who loved them.

They were cricket players and poets, cleaners and administrators, doctors and nurses. They were hard workers, committed to the same Hippocratic Oath that I took as a doctor: to treat the sick and the wounded, no matter who they are.

They represented the best of us.

Even in war, hospitals must be safe places. International Humanitarian Law asserts this protection.

We are here today to remember my colleagues and our patients, and to reaffirm our commitment to medical ethics and international law.

We are here to deliver a petition signed by more than half-a-million people who are asking for an independent investigation.

For people like me who regularly work in war zones, it’s essential to understand and to affirm the rules of war. Without assurances about the safety and security of medical humanitarian space, we dare not go where we are most needed. 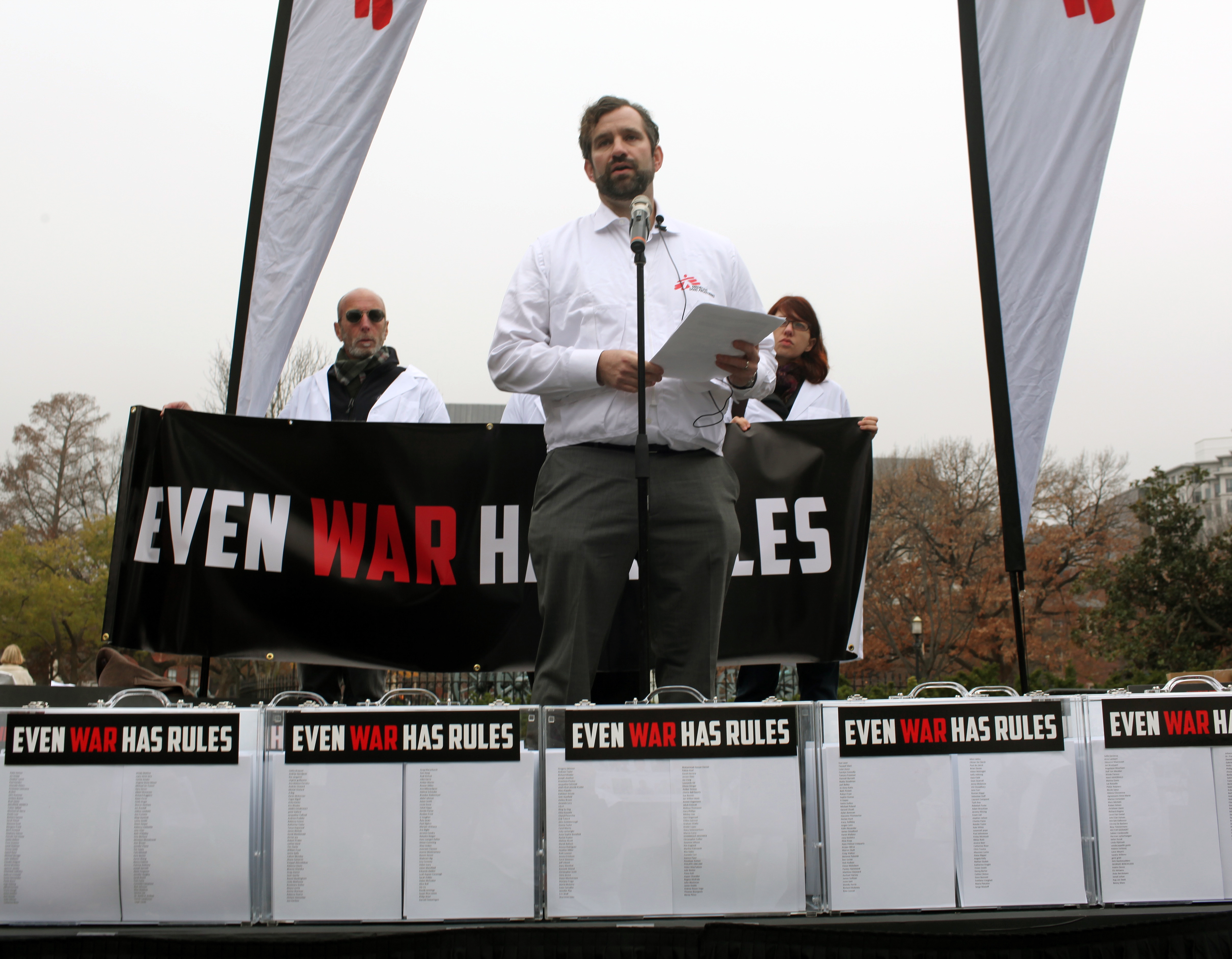 Good morning. Thank you for being here today and for your support.

I am Jason Cone, the executive director of Doctors Without Borders/Médecins Sans Frontières (MSF) - USA.

The U.S. attack on our hospital in Kunduz, Afghanistan on October 3 constituted one of the single largest losses of life in the 44-year history of MSF.

Patients felt safe while under our care at the Kunduz Trauma Center. The facility had been respected as a place of safety for patients from all sides of the conflict in Afghanistan, until it was reduced to ash with devastating precision.

Not only were at least 30 of our staff and patients killed in their hospital beds and as they fled the burning remains of the hospital, but hundreds of thousands of people in Kunduz are now effectively cut off from access to lifesaving trauma care.

Five days after the attack, President Obama took full responsibility for the deadly strike, and apologized to our International President, Dr. Joanne Liu.

On November 25, General John Campbell, commander of U.S. forces in Afghanistan, released the findings of a U.S. military investigation into the attack, stating that U.S. forces would never intentionally strike a hospital or other protected facility. He outlined a series of technical failures and catastrophic human error that culminated in the deadly attack on a protected hospital full of patients and staff.

These are important and significant steps taken by the U.S. government.

Yet, the full military report, along with a separate NATO investigation, has not been made public.

Today, we reiterate our call for an independent investigation.

We cannot rely solely on the parties involved in the conflict to carry out an independent and impartial examination of an attack in which they are implicated. Perpetrators cannot also be judges.

The U.S. military has said that their rules of engagement were not followed in the airstrikes. But these rules are classified, whereas the Geneva Conventions abundantly clear.

We need an independent investigation to establish the facts through the lens of international humanitarian law, which protects medical facilities, staff and patients. Our ability to run hospitals on the frontlines in Afghanistan and elsewhere depends on the recognition of these principles.

To date, we have not received any official response from the Obama Administration on our request for an independent investigation.

So, we are again calling on President Obama to consent to the fact-finding commission.

Doing so would powerfully signal the U.S. government’s commitment to and respect for International Humanitarian Law and the rules of war. It would say to all, that impartial medical care in a war zone transcends whatever conflict is being waged.

More than 540,000 people have joined our call by signing our petition. They have stood up to say that even war has rules.

People worldwide are demanding transparency and assurances that medical staff and patients in wartime must be protected, as obligated under the Geneva Conventions.

These Conventions govern the rules of war. They were established to protect civilians in conflicts, including patients, medical workers, and facilities. They bring some humanity into what is otherwise an inhumane setting.

We face today a critical moment.

Medical facilities, health staff, and patients are under attack in conflict zones, from Afghanistan to Syria to Yemen.

At stake is the ability of humanitarian organizations to continue their lifesaving work at the frontlines of conflict.

The preservation of hospitals as neutral, protected spaces depends on this. If not for the recognition of these principles, MSF and other humanitarian organizations could not work in conflict zones. We could not deliver the medical care so many people so desperately need.

Today, with the delivery of this petition to the gates of White House, we continue to fight back for the respect of the Geneva Conventions.

As a medical humanitarian organization, along with hundreds of thousands of people around the world, we are fighting back for the sake of our patients.