Fighting in DRC's Rutshuru district is preventing people from accessing essential care in the midst of a cholera outbreak. 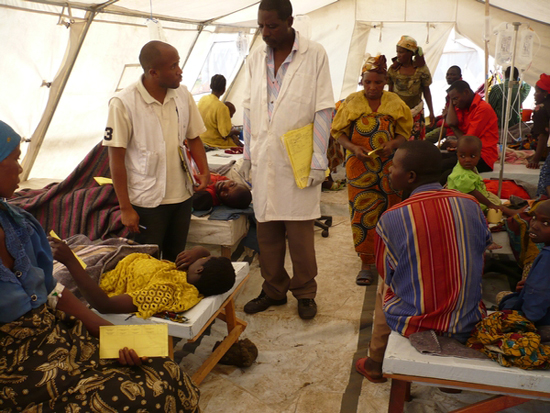 MSF's efforts to treat cholera in Rutshuru have been hampered by conflict.

PARIS/GOMA, DRC, JULY 10, 2012—The resumption of fighting in the Rutshuru district of North Kivu Province in the Democratic Republic of Congo (DRC) is preventing people from accessing essential care in the midst of a cholera outbreak, the international medical humanitarian organization Doctors Without Borders/Médecins Sans Frontières (MSF) said today.

Fighting in the region resumed after a brief lull, when rebels advanced towards the towns of Jomba, Chengerero, Rwanguba, and Bunagana; and took control of Rutshuru and Kiwanja on Sunday, July 8. Conditions are now too perilous for patients to travel to health facilities.

"Some roads are blocked or unsafe and it is difficult for people to access health facilities," said Mickael Le Paih, MSF head of mission in North Kivu. “There have been significantly less people coming to the hospital.”

Patients also cannot reach the cholera treatment center in Rwanguba, where an outbreak began in late May. With the support of an MSF emergency team, 753 patients were treated for cholera at the beginning of July.

MSF calls on all belligerents to ensure unhindered access to medical care.

"The fighting over the last few days has prevented us from providing quality care,” said Le Paih. “Civilians are once again bearing the brunt of the violence.”

MSF is maintaining its operations in North Kivu, with a surgical team present in Rutshuru General Hospital. Almost 300 wounded people have been treated at the hospital over the last eight weeks.

The insecurity in Rutshuru has led to significant population displacements, with people fleeing to neighboring Uganda and Rwanda, where they are forced to live in extremely poor conditions.

MSF is an international medical humanitarian organization that has been providing neutral and impartial medical assistance to victims of conflict in the DRC since 1996. In 2011, In North Kivu, MSF treated more than 404,000 people in 2011, providing care to more than 8,000 malnourished patients, treating 45,000 people suffering from malaria, and carrying out more than 15,000 deliveries. MSF teams also treated nearly 300 people for violence-related trauma.