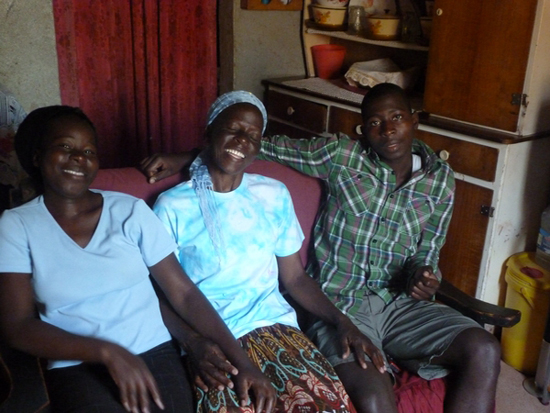 Mary Marizani and her family

In her home on the outskirts of Zimbabwe’s capital city, 48-year-old Mary Marizani says that, although she recently became the first Doctors Without Borders/Médecins Sans Frontières (MSF) patient in the country to conquer multidrug-resistant tuberculosis (MDR-TB), she now faces another challenge: “I have my appetite back and now I am eating everything in sight.”

Mary’s ability to joke has finally been restored following two grueling years of medical treatment for MDR-TB that included daily injections and a cocktail of highly toxic pills that made her vomit, lose her appetite, and hallucinate.“I felt like I had bugs crawling on the inside of my head,” she says.

Mary first showed the symptoms of tuberculosis (TB) in 2006, after caring for four members of her family who had the disease. After eight months of treatment (not with MSF), she was taken off TB medication by a doctor who declared she “looked much better” but never screened her to confirm whether the treatment had been successful.

In the months that followed, Mary was in and out of the hospital with fever and a dry cough she could not shake. Her condition gradually grew worse and she lost half her body weight. Finally, she took the advice of a neighbor and went to a clinic where MSF was treating patients with TB.

She was diagnosed with a strain of TB resistant to the usual drugs. At that time, no treatment was available for drug-resistant TB in Zimbabwe, but when MSF launched its MDR-TB project in Epworth, near Harare, in December 2010, Mary became its very first patient.

For Mary, the treatment came just in time, says Mary’s 24-year-old daughter, Shorai. “Just two days before the MSF doctors came to tell us the good news—that she would go on a new course of drugs—my mother had coughed up half a bucket of blood. It was terrible. I thought she was going to die.”

In Zimbabwe, there is massive stigma around TB, and many people wrongly believe that the disease is incurable. “Most of my family deserted me for two years while I was on MDR-TB treatment,” Mary recounts. “My own relatives didn’t come to visit me when I was on death’s doorstep. The only family I had left was MSF and my two children.”

It was a horribly difficult time. “I had to pass through hell to get to heaven,” says Mary, but she was able to see the treatment through to its end with the support of MSF staff, who also shared their knowledge with government doctors throughout Zimbabwe, most of whom had no previous experience of treating the disease.

“It’s extremely difficult to watch your patients try to cope with the horrendous side effects caused by this arduous two-year treatment,” says Kodjo Edoh, MSF health adviser for Zimbabwe. “We urgently need treatment for DR-TB that can cure people in less time and with fewer side effects.”

In the two years since Mary became Epworth’s first MDR-TB patient, the numbers of patients on treatment have grown. Currently, MSF is treating 40 MDR-TB patients at its projects across the country, benefiting from the introduction of a new test for TB drug-resistance, known as GeneXpert, which has cut the time it takes to diagnose someone from 42 days to just two hours.

Now cured, Mary is energetic and sociable again, and she is an inspiration for the other patients at Epworth. For them, she is living proof that the treatment works.

“The MDR-TB treatment was a miracle,” says Mary. “MSF lifted me up from my death bed and gave me back my life.”