Doctors Without Borders/Médecins Sans Frontières (MSF) is currently providing medical and mental health care to migrants and refugees in Tunisia—in Sfax and Zarzis. Many of these patients arrive after a perilous journey through Libya, where migrants are often kidnapped, tortured, and held for ransom. In Sfax, MSF mainly sees patients from sub-Saharan Africa, among them undocumented migrants, victims of human trafficking, and other vulnerable people. For them, Tunisia is a transitional point between their conflict-torn homes and Europe, where they hope to find work and a better life. As time passes, however, many find themselves trapped here, unable to return home due to violence and blocked—both financially and physically—from migrating to Europe.

The following are stories and testimonies from migrants in Zazis, Sfaz, and Medenine, Tunisia. 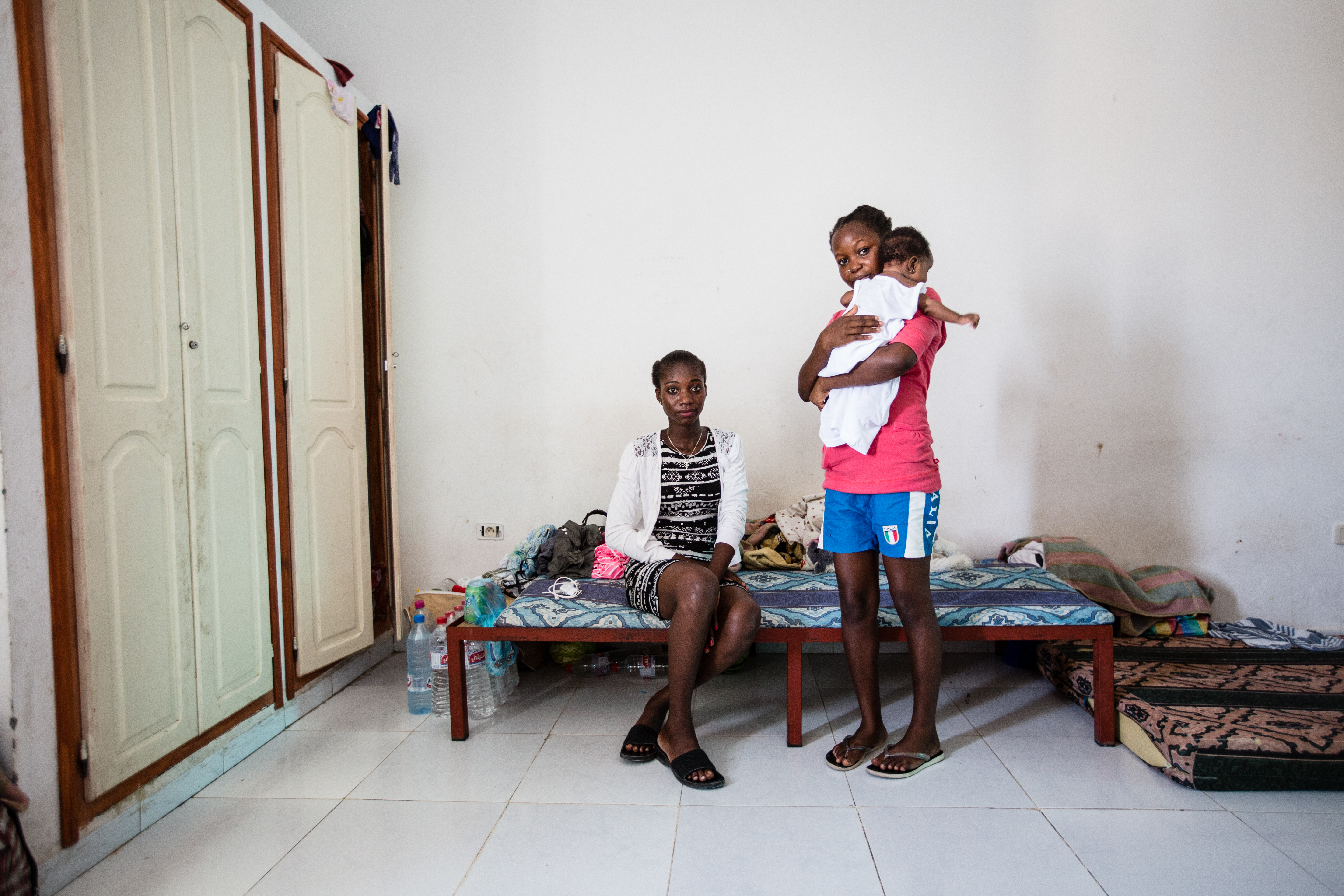 In May 2017, 127 migrants boarded a large rubber boat leaving Libya. After a few hours, the boat ran out of fuel and for two and a half days the people on board were adrift on the open sea without food or water. A fishing boat spotted them and alerted the Tunisian Coast Guard. The migrants were transferred to the Tunisian Red Crescent (CRT) in Medenine, supported by MSF.

Joy and Fortune are both from Nigeria and are currently living at the CRT in Medenine; both were among those 127 passengers. In Libya, Joy had spent three months in a private prison guarded by gangsters after so-called Hamza Boys stopped the truck carrying her and other migrants across Libya. She was beaten and tortured while waiting for her family to raise enough money to pay the ransom. 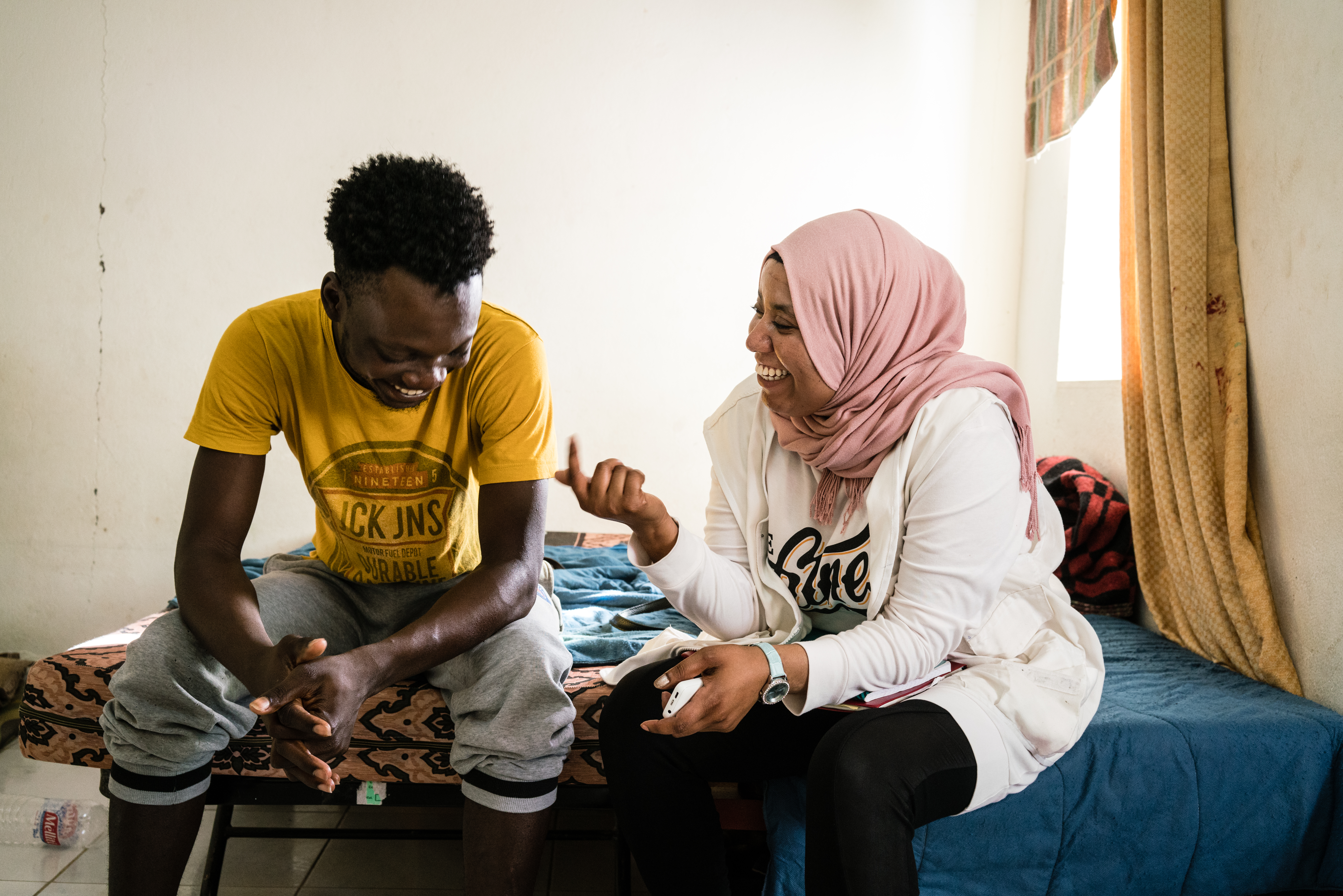 Wealth Obazce, from Nigeria, was among the 127 people on board the rubber boat that arrived at Zarzis. He is now in Medenine, where the CRT is responsible for housing and food while MSF provides medical care and psychological support.

Some migrants who escape Libya and come to Tunisia will actually return to Libya, as it is currently the route most used by smugglers to bring people to Europe.

"They are desperate. There are some who have tried to return to Libya, who have lived through the same horrible sufferings, and who still say that they are going back there to try to go to Europe. The explanation is that if you leave your home, if you embark on this difficult journey through the desert with so much threatening your life, if you have invested so much emotionally and financially, you cannot go back. They have lost everything. So they have nothing else to lose except their own value." 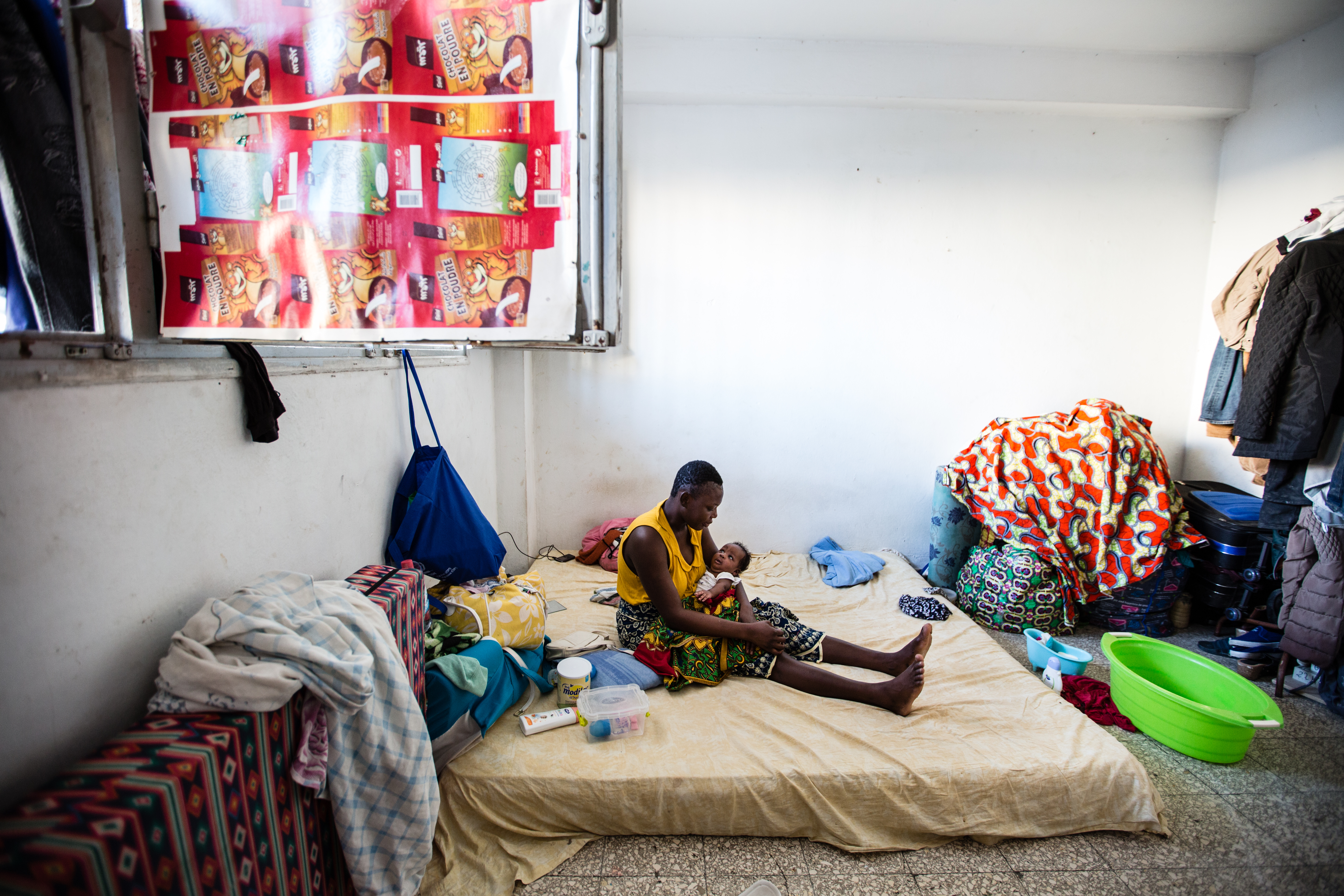 Bébé Issouf was born two months ago in Tunisia. MSF doctor Ikram Gargouri assisted the mother during pregnancy and after the birth. Mother and child now live in a four-floor building called La Poudrière in Sfax, where many migrants rent rooms. The residents are mostly Ivorians and Nigerians, but Cameroonians, Ghanaians, and others also live in the building. Because rent is much higher than normal and the landlord overcharges for water and electricity (without showing bills), the people here live four or five to a room. The migrants have no choice but to pay. They take irregular jobs to survive, often working the most difficult jobs in construction, carpentry, plumbing, gardening, and cleaning. Employers take advantage of the cheap labor, paying only 12 to 20 dinars (5 to 8 dollars) per day. Migrants have no choice but to accept. They have no other options, and a room at La Poudrière costs 120 dinars (49 dollars) per month. To pay rent, they must take any work they can find. 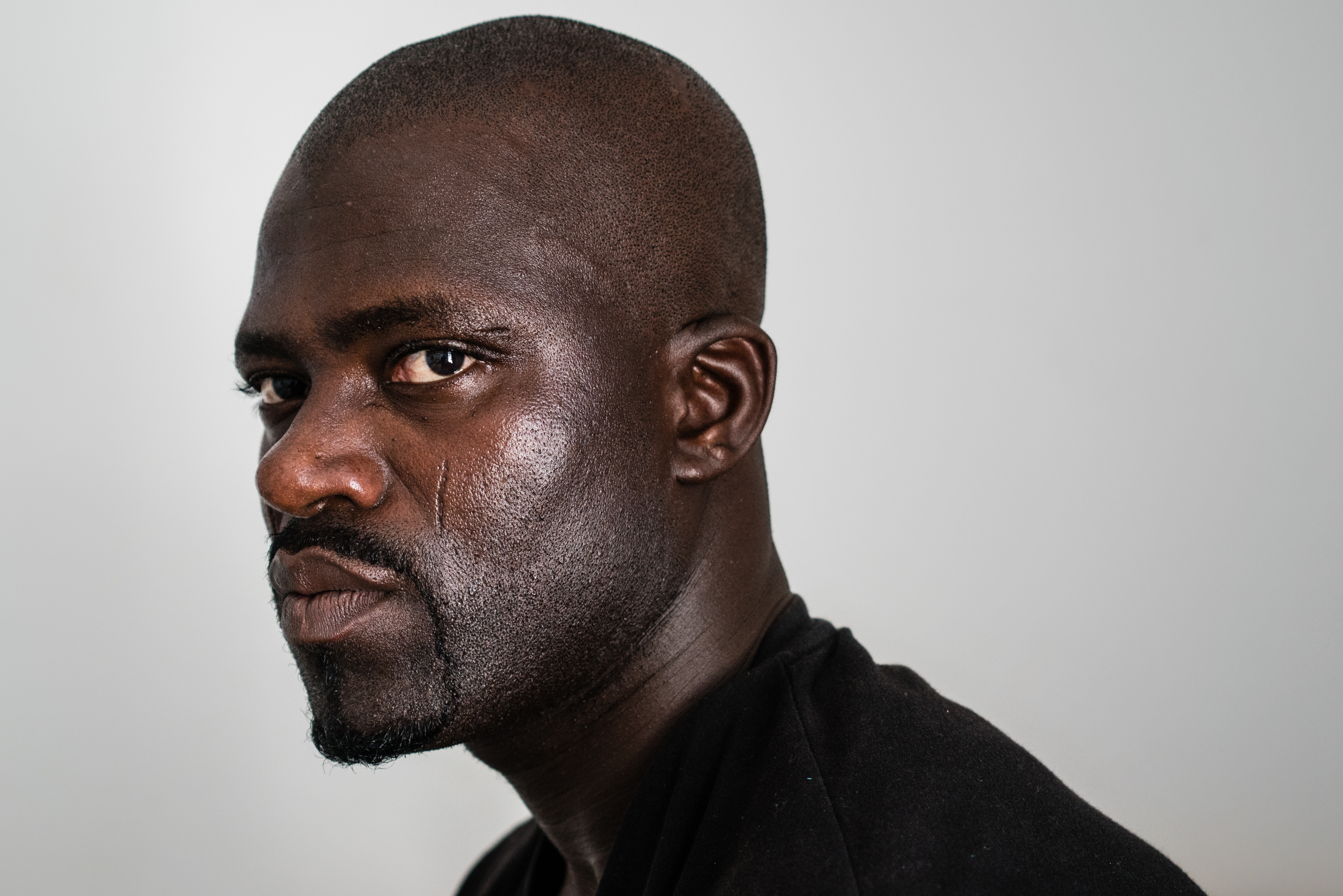 Thirty-five migrants, all of whom fled the Libyan War in 2011, live at Maison des Jeunes in La Marsa, outside of Tunis. Most of them lived for almost seven years in terrible conditions in a camp in Choucha in southern Tunisia, on the Libyan border. MSF was the last humanitarian organization with a presence in Choucha camp. After UNHCR left the camp in 2013, it was officially closed, though it was only dismantled in June 2017. Many migrants were left with nowhere to go.

"My dreams are weeping, my dreams are crying. I spent seven years in the camp. Several times I begged to be able to take the bus to Tunis to talk with the UN. But they left me outside, telling me I must speak with the Tunisian authorities, who told me in their turn that it is a problem of the UN. I belong to the Akwamu ethnic group, which is in conflict with the Adangmés in Ghana."

Thirteen organizations are asking Tunisia to adopt a legal framework for the protection of asylum seekers and refugees. These groups are also asking the UN to reconsider the asylum claims of these 35 refugees. Only four of them have valid refugee status claims, according to the International Organization for Migration (IOM), but the promises of housing and work made by the government of Tunisia have not taken shape.

"These men have been forgotten by everyone. Suddenly, they are expelled from the camp without any information, and they are not given any information about the future. They deserve consideration and real solutions." 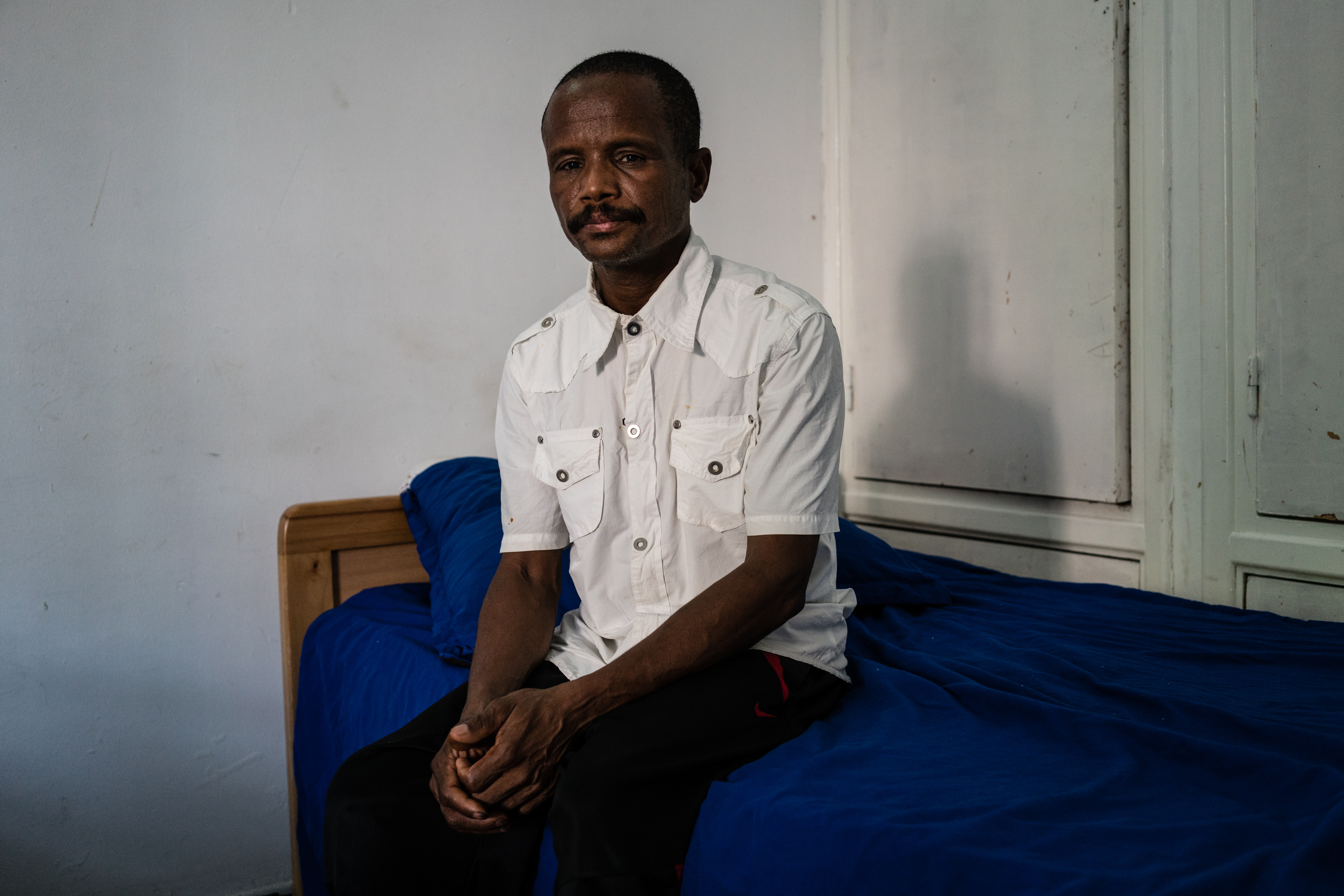 "In 2000, I left Darfur because of the war. I did not have a destination. Some went to Chad, Central African Republic, me to Libya. Until 2011, I could stay there. But after a month of Libyan war, it was necessary to flee again. The roads to the north were blocked. The only open road was to Tunisia. The IOM has sent us to Choucha camp and I stayed there until the dismantling of the camp by the soldiers on June 19, 2017.

The living conditions at Choucha were very difficult, but going back to Darfur is impossible. The Sudanese regime considers those who remained abroad as opponents who help the rebels financially. One risks prison, torture, even death. I have the right to be a refugee because I have fled the war twice. So I did not try to go to Libya to go to Europe, like many others. But the only proposal I get here is the voluntary return to Sudan.

I cannot stand it anymore, I've been here for six years, under bad conditions. At the Choucha camp there were long cuts of water, fires, and deaths. The only thing I want to know now is who I have to apply to for asylum. IOM and UNHCR only speak of voluntary return. It's been 18 months since I saw my mother and my three brothers, but I cannot go back. I'd risk my life. I have a chronic heart disease. Thankfully, MSF is taking care of my medicines. Otherwise, I would die."